As per Persistence Market Research’s industry analysis on electric cargo bikes, the market is witnessing significant growth in 2021 with worldwide revenue up 9.1% year-on-year. Revenue across the world is projected to increase 3X by 2031, reaching nearly US$ 1.9 Bn.

Europe is set to be a lucrative market for electric cargo bikes, rising at around 12.7% CAGR and capturing more than 60% share of the global market.

From 2016 to 2020, sales of electric cargo bikes increased at 7.7% CAGR, with developed countries such as the U.K., Germany, Italy, France, and the U.S. accounting for a large portion of the global market.

Governments and other governing organizations, primarily in developed countries, have been expanding their efforts in recent years to address a variety of concerns associated with transportation and environmental impact. Several government and non-government groups throughout the world are working to promote cargo bikes as an environmentally responsible urban logistics transit option.

The City Changer Cargo Bike Project, based in Europe, intends to increase the use of cargo bikes as a healthy, space-saving, environmentally friendly, and cost-effective form of transportation for both, individual and commercial purposes.

During the forecast period, a number of comparable projects in Europe and other parts of the world are projected to have a favorable impact on the global cargo bike industry. Significant increase in the number of such projects is expected to raise significant awareness among commercial, public, and private sector stakeholders.

Cargo bikes are rapidly acquiring great popularity around the world, as seen by the increase in their use for private and commercial logistics, as well as semi-stationary applications.

What are the Issues That Electric Cargo Bike Suppliers Face?

Electric cargo bikes are not widely adopted in developing countries such as India due to the lack of infrastructure and high cost. These bikes require dedicated tracks, and thus, irregular road conditions may affect the overall performance of the bike.

Across the globe, various types of electric vehicles such as electric motorcycles, electric cargo bikes, and electric bikes are already being used for the transportation of goods as well as conveyance. Therefore, the adoption rate of electric cargo bikes is low, which is projected to stymie the global market's overall expansion over the coming years.

What are the Key Opportunities for Electric Cargo Bike Manufacturers?

Cargo bikes that are both, cost-effective and high-performing, are the most sought-after, according to Persistence Market Research. Customers are also likely to seek cargo bike brands that are well-established, long-lasting, and cost-effective.

To gain a competitive advantage in the market, costs will be reduced, product offers will be expanded, and long-term supply agreements with manufacturing firms and distribution channel players will be formed.

What is the Regulatory Impact on Global Sales of Electric Cargo Bikes?

Many governments have recognized the potential of electric cargo bikes for effective logistic support, as well as the need to restructure parcel delivery services in order to achieve their carbon neutrality targets. Many of them have devised new regulations and plans, such as e-cargo bike delivery programs, to alleviate traffic congestion and pollution on city streets.

Nations and cities across the world have realized the necessity of conserving the environment. As a result, many nations across Europe are providing financial incentives to people who purchase electric cargo bikes. For e.g., Paris offers one of Europe's most generous incentives, up to €1,200 for the purchase of a cargo bike.

Which Region Offers the Largest Opportunity for Sales of Electric Cargo Bike?

With an absolute dollar opportunity of around US$ 988 Mn, Europe is expected to be the most lucrative market for electric cargo bike suppliers. Germany is projected to hold nearly 40% of the market share of the European region. 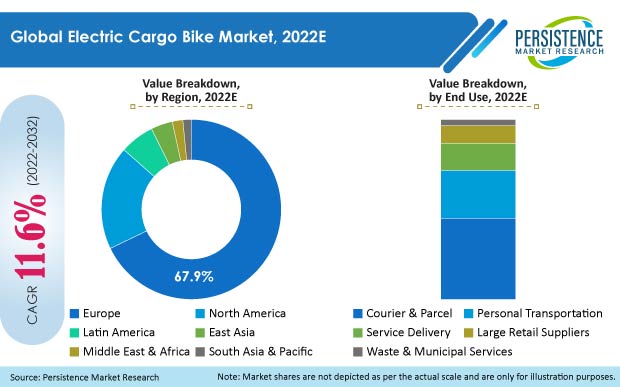 Where Does the U.S. Stand in the Market for Electric Cargo Bikes?

The U.S. holds around 91% of the North American share of the electric cargo bike industry. The country's e-mobility industry is well-supported by the government and is backed by well-developed infrastructure. As a result, the U.S. has the highest amount of spending in North America.

What is the Outlook for Electric Cargo Bike Manufacturers in China?

China is among the most popular profitable markets for manufacturers of electric cargo bikes. The market in China is projected to expand at a CAGR of 6.5% during the forecast period.

Changing economic rules in terms of pollution control would prove helpful for the regional market over the coming years, with increased investments in infrastructure to satisfy the demands of the country's enormous population.

To maximize the capacity of its manufacturing sector, China has been quickly deploying modern digital technology in manufacturing. Additionally, rising investment in the e-mobility sector as well as continued advancements in battery technology to extend the range of electric cars are expected to boost demand for electric cargo bikes in the country.

Why is Germany a Lucrative Market for Electric Cargo Bike Producers?

During the forecast period, Germany is expected to be one of the most appealing markets for electric cargo bikes. According to the analysis, Germany would account nearly 40% of the European market by 2031.

Germany is one of the key e-mobility markets in the world, making it a valuable destination for electric cargo bike makers. Besides, rising concerns about carbon footprint, population expansion, and increased transportation in Germany will all contribute to market growth.

What Is the Outlook for Electric Cargo Bike Manufacturers in Brazil?

Brazil is one of the fastest-growing electric cargo bike markets. This market is projected to be expanding at a CAGR of 7.7% through 2031.

Any country with bicycles in its cities is a step closer to promoting cycling as a mode of transportation. Prevalence of cargo bikes in Brazil's largest cities is a unique feature of urban life. Cargo bikes in Rio are owned by people and small enterprises, and these bikes are used to deliver goods and services in Rio and other Brazilian cities as well.

Which Type of Electric Cargo Bikes Has the Most Growth Potential?

The top product categories are two-wheeled and three-wheeled electric cargo bikes, and both categories are predicted to have a combined share of more than 90% of the market by the end of 2031.

A broad range of end uses and applications in big delivery quantities and personal mobility has been identified as the driving force behind this rise. Over the next few years, the market is anticipated to move northward.

Why is the Use of Lithium-ion Batteries in Electric Cargo Bike Surging?

Lithium-ion batteries are projected to dominate and account for over 80% of the global market by 2031.

Use of fast-charging lithium-ion batteries minimizes the amount of time the bike is connected to a charging station. The less time a machine stands idle in a busy facility, the better. Lithium-ion batteries can also be charged when the equipment is not in use, reducing machine downtime. Cleaning processes are no longer required to account for the necessity for a battery to fully charge between uses.

Which End Use Has the Highest Demand for Electric Cargo Bikes?

The courier and parcel service provider industry accounts for a majority of e-mobility transportation growth. The industry is estimated to provide nearly 48% of total revenue by 2031. This is due to increase in the number of e-Commerce deliveries and logistics, which is predicted to drive demand for electric cargo bikes on a global scale.

What is the Impact of COVID-19 Crisis on the Electric Cargo Bike Space?

Coronavirus had a two-way impact on the electric cargo bike sector. Lockdown mandates, on one hand, drastically impacted the supply chain. Manufacturers of e-bikes faced a variety of challenges, including getting raw materials and components, as well as delivering finished products and luring personnel from quarantines.

Many manufacturers were forced to reduce their output. On the other hand, growing e-Commerce and meal delivery businesses around the world had a favorable impact on market growth. During the pandemic in 2020, e-Commerce and food delivery firms soared, owing to growing need for home deliveries. Following the lifting of lockdowns in several countries, demand for electric cargo bikes is expected to increase even more.

The global electric cargo bike market is fairly competitive, with a large number of competitors competing in the terrain. Major players are taking steps to grow their operations and gain a larger piece of the market. Foreign players are projected to expand their footprint through acquisitions during the predicted period.

Recent developments related to companies manufacturing electric cargo bikes have been tracked by the team at Persistence Market Research, which are available in the full report.

With rising concerns regarding effective procedures for waste management, innovations in garbage collection trucks are also increasing to ease the process of waste disposal and recycling.

Global forestry trailers market is expected to reach revenue of over US$ 232.1 Mn along with a healthy CAGR of 3.7% by end of the forecast period. More details. .