The tractors segment by product type is estimated to create incremental opportunity 8.5 times that of the combine harvesters segment between 2016 and 2024

The demand for agricultural equipment is expected to witness significant growth during the forecast period. This strong growth can be attributed to shifting of agricultural activities from animal or manual operations to automated methods. Factors such as government initiatives, rising urbanization rate and time-saving properties are shifting the focus of farmers to mechanization and improving their investment power. Training programs conducted by the government for technicians, farmers, and machinery users is another important factor that is expected to further propel the demand for tractors over the forecast period. 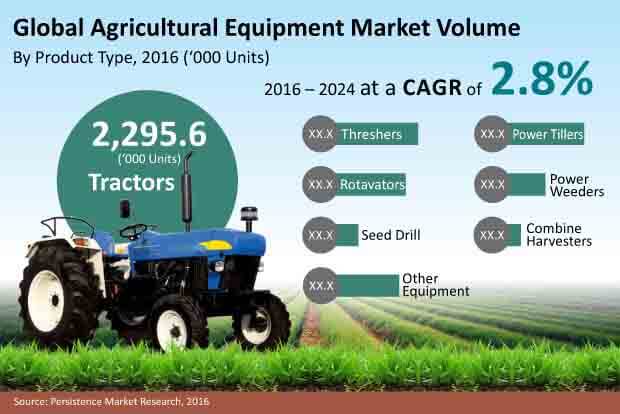 The tractors segment is expected to account for a significant market share globally, owing to technological advancements

The analysts of Persistence Market Research have followed a solution oriented approach while studying the global agricultural equipment market in a recent publication titled “Agricultural Equipment Market: Global Industry Analysis and Forecast, 2016-2024.” Major players in the market are focused on shifting their production bases to the Asia Pacific and MEA regions in order to capitalize on economies of scale. The analysts have observed that the tractors segment by product type is expected to dominate the global agricultural equipment market over the period 2015 to 2024. However, the seed drill and power weeder segments are expected to grow at an attractive CAGR over the forecast period. After studying the global agricultural equipment market in detail, the researchers have come to the conclusion that APAC and North America are expected to hold a relatively high volume and value share respectively. Among all regions, MEA is expected to witness relatively high CAGR during the period 2015 to 2024, followed by Latin America and APAC. According to this report, long-term strategic partnerships with component suppliers may provide good growth opportunities for agricultural equipment manufacturers. The report highlights key player strategies of studying market trends and consumer demand patterns to continuously evolve in product offerings and ensure uninterrupted revenue generation.

What are the market participants saying?

Yearly change in inflation rate has not been considered while forecasting the market numbers. Average Selling Price (ASP) has been considered to determine market values while studying the global agricultural equipment market. Top-down approach has been used to obtain market numbers, while bottom-up approach has been used to counter-validate the market estimations. Macroeconomic indicators such as GDP and end-use application industries’ growth have been considered in this report. The average price of agricultural equipment is inferred across all the five assessed regions. Market volume is inferred through in-depth secondary research and validated from industry experts through primary interviews. Each interview is thoroughly analyzed and average market volume is deduced and reconfirmed prior to incorporating in the report. The market value of the global agricultural equipment market is thus calculated from the data derived from the average selling price and market volume.

For the eight year forecast of the global agricultural equipment market, various macroeconomic factors and changing trends have been observed, giving an idea about the future of the market. Other important factors considered to arrive at market forecast include the size of the current market, inputs from the supply side and the demand side and other dynamics shaping the scenario of the market.

In the compilation of the report, the forecasts are conducted in terms of CAGR, while other important criteria such as year-on-year growth and absolute dollar opportunity have also been incorporated presenting the client with crystal clear insights and future opportunities as far as the global agricultural equipment market is concerned.