Owing to increasing carbon emissions across the world, many key players focused on finding alternative energy sources that are clean. From the last decade, solar PV has rapidly evolved from being a niche market into a mainstream electric source. Owing to its emission-free characteristics, the demand for PV installation is rising.

However, futuristic demand for solar PV is anticipated to come from East Asia and South Asia, especially from China, Japan, India, Australia, and ASEAN countries. High purity quartz (HPQ) has key and unique characteristics that are used in the production of c-Si cells and modules, as well as crucibles and quartz glass for tubes, rods, and windows.

Increasing demand for PV installation is expected to create more opportunities for manufacturers in the global high purity quartz market.

Increasing Use of Semiconductor ICs Fueling Demand for HPQ: The upstream part of semiconductor production is somewhat similar to that of solar cells. HPQ glass crucibles are used to produce Si grade metallic semiconductors. Poly-silicon is placed in the crucible and heated to a high temperature, and a crystalline silicon ingot is drawn from the melt.

High-grade HPQ is the only material used for this purpose, because even the slightest impurity in a semiconductor will result in complete discard and the loss of millions of dollars. HPQ and its associated derivatives have multiple uses within the semiconductor industry.

With prominent crucible manufacturers based in China and a rapidly growing semiconductor industry in the region, the demand for HPQ in Asia Pacific is projected to remain the highest over the forecast period

Apart from telecommunication and data transfer, optical fibers are also increasingly being used in medical and scientific research, further driving the growth of the high purity quartz market.

Rising Demand for HPQ as a Slag Agent for Si Metal Production: Metallurgical grade Si is widely used as a base metal in the manufacturing of solar cells and semiconductor chips to produce poly-silicon, which is then grown into ingots and sliced into wafers.

The most widely used process across the globe for this application is the Siemens process, which is extremely costly and energy-intensive, and comes with a large carbon footprint.

However, in recent times, other new technological processes have been introduced that incorporate HPQ for the production of solar grade silicon, and significantly help in reducing production cost, time, and carbon emissions.

As persisting purification technologies are considered as energy-intensive and non-ecological, the market is hungry for new solutions. The HPQ market is seen as an attractive investment for companies to replace existing production standards. 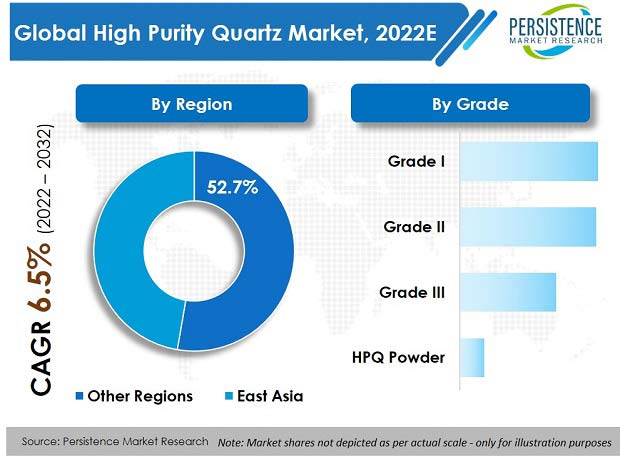 The global COVID-19 pandemic has affected most industries and countries across the world, and the high purity quartz market has certainly not been immune to this. The HPQ supply chain has been severely disrupted, and this is having a huge impact on the electronics industry. This will also lead to price rise, compelling players in the high purity quartz market to up their prices, thereby affecting the dynamics of the semiconductor industry.

The global high purity quartz market size is expected to expand at a health CAGR of around 7% through 2030. From the demand-side perspective, in 2019, the East Asia region, especially China, which accounted for more than 50% of global semiconductor consumption. In 2020, total consumption of semiconductors in China is anticipated to be around US$ 231 billion. But, due to the pandemic situation created by COVID-19 across the globe, disruptions in the supply chain in China are expected to have a significant impact on key HPQ market players across the globe, both, up and down the electronics sector value chain.

PMR’s study on the high purity quartz market is divided into three significant segments - grade, end use, and region. This report offers comprehensive data and information about the important market dynamics and growth parameters related to these categories.