India Market Study on Electric Vehicles: Passenger Cars to Zoom Ahead of Two-wheelers & Commercial Vehicles in Terms of Revenue Share

The most common type of vehicles found on the road, the passenger cars segment is projected to gain nearly 3400 basis points between 2017 and 2025, expanding at a CAGR of 90.7% over the forecast period.

The segment is expected to increase by 174X in terms of value, and is predicted to be the most attractive segment in the India electric vehicles market during the forecast period. 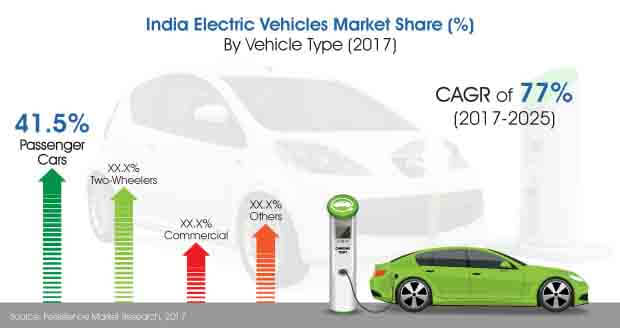 “In 2015, the government of India introduced a scheme – Faster Adoption and Manufacturing of Hybrid and Electric Vehicles (FAME) – to promote clean fuel technology cars. This scheme was introduced under the National Electric Mobility Mission Plan (NEMMP) to mobilize a fleet of six million electric vehicles on Indian roads by 2020. For achieving their targets, the Indian government is planning to replace petrol and diesel variants being used by its agencies with electric vehicles.

This plan is to be executed by the government in the next three to four years. For making it possible, the Energy Efficiency Services Ltd (EESL), under the administration of the Ministry of Power and the government of India has taken an initiative by placing an order of 10,000 electric vehicles.

Tata Motors has won this tender and is likely to supply these Electric Vehicles (EVs) in two phases; first 500 electric cars will be supplied to Energy Efficiency Services Ltd (EESL) in phase one and the rest 9,500 electric vehicles will be delivered in the second phase.”