Transport of liquids, together with nutrients and medications for patient in a controlled quantity is done through IV tubing sets and accessories. Development of this market is majorly boosted by rising adoption of new technologies; for example, sifted IV tubing sets with flow regulators come with a few advantages such as accurate and precise drug delivery, faster results, and improved medication. Moreover, rising patient pool with chronic pain and diabetes is expected to drive demand for IV tubing sets and accessories.

Additionally, there has been an increase in the prevalence of coronary artery diseases (CAD) worldwide, with cardiac arrest being the main reason of death among people above 60 years of age. Globally, in order to maintain their market position, leading companies are acquiring others who are facing large number of product recalls. Favourable reimbursement policies and increasing healthcare expenditure are also some factors driving market expansion.

A latest revised report by Persistence Market Research details the trends in 20+ high growth markets, along with the impact the COVID-19 pandemic has had on the healthcare industry in general, and on the demand for IV tubing sets and accessories in particular.

Rising geriatric population is expected to drive demand for IV tubing sets and accessories, since people aged above 60 years are at a high risk of developing cancer. Rising incidence of cancer along with increasing adoption of treatment will provide abundant opportunities for IV tubing sets and accessories manufacturers through the forecast period.

According to Persistence Market Research’s analysis, the IV tubing sets and accessories market is projected to progress at a CAGR of close to 5% from 2021 to 2031.

How is increasing prevalence of chronic infections boosting sales of IV tubing sets and accessories?

Rising occurrence of chronic infections, for example, diabetes and cancer, have brought about innovation and introduction of cutting-edge IV tubing sets to be utilized in infusion treatment for effective treatment techniques. This is attributable to better medical services and more increased awareness with regard to economic treatments including high usage of IV tubing sets

Occurrence rate of a few infection conditions such as chronic diseases and respiratory diseases is rising at a disturbing rate in emerging and developing nations, accordingly driving interest for infusion. Populated nations have high prevalence and incidence of chronic illnesses - stroke, which, as a result, is driving the need for infusion therapy, and thereby, IV tubing sets.

What is the impact of growing export-import activities in IV tubing sets?

Rising export and import of infusion pumps, supplies, and consumables in nations such as the United Kingdom, France, Poland, Russia, and the Netherlands is expected to help the development of the European market for IV tubing sets and accessories.

The European market offers vast opportunities for exporters of infusion pumps and consumables (including IV tubing sets) within the region, with the U.K., Poland and Russia being major countries to target in order to enhance revenue generation. In Europe, France and Germany offers a huge market for infusion sets and pumps, and have set up many new manufacturing facilities.

How is rising adoption of branded products impacting the market?

Over the recent years, rise in interest for patented and branded advanced IV tubing sets and related IV tubing sets has been seen from end users such as ambulatory surgical centres, hospitals, homecare settings, and long-term care in Europe, when contrasted with the Asia Pacific locale. 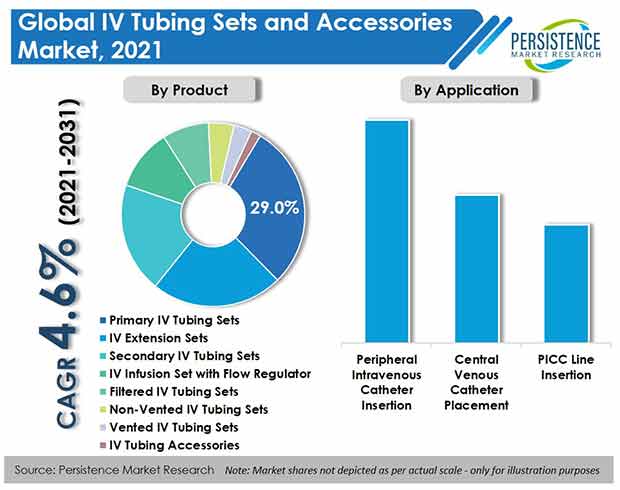 How big is the opportunity in the U.S. for IV tubing sets and accessories?

The medical services system of the U.S. is well-known for its high level expenditure and infrastructure. The system of hospitals and care centers is known for administrative principles and insurance strategies. Government and administrative bodies in the U.S. are embracing a few expense control intends to lessen medical care expenditure.

The move from a volume- to a cost-based system is significantly determined by different measures attempted by suppliers, governments, insurance payers, and biotechnology organizations. A portion of the actions are result-based benefits, valuing, hazard sharing, serious offering, and value control. A worth-based medical services system won't just give improved results through incorporated care pathways, but additionally demand valuing tension on medical device organizations, and this is probably going to affect funds on the R&D of cutting-edge clinical therapy advances.

The market in the U.S. is expected to progress at a sound CAGR of more than 4% during the estimate time frame.

How is rising number of infectious disease in Germany influencing demand for IV tubing sets and accessories?

Rising number of chronic diseases is pushing IV tubing sets and accessories interest in Germany. The Robert Koch Institute (RKI), a German research institute and government organization, which is liable for infectious control and prevention, as per the German Protection against Infection Act, records and examines information on the event of various diseases in Germany. Every year, outcomes are printed in the Epidemiological Yearbook of the Notifiable Infectious Diseases.

Information shows expanded rates of a large number of chronic diseases, including, but restricted to, measles, meningococcal meningitis, typhus tuberculosis, leprosy, HIV/AIDS malaria, whooping cough, and syphilis. It is noted, nonetheless, a large portion of additional tropical diseases that entered the country from Africa was controlled and there were no large episodes among everyone. In any case, expanded instances of chronic diseases is expected to bolster demand for IV tubing sets and accessories in Germany.

What is the Impact of increasing geriatric population of China on IV tubing sets and accessories demand?

China is one of the most populated countries on the planet, confronting the fast aging of its populace. As per information from China's National Bureau of Statistics, toward the end of 2018, 11.9 percent of the population (166.6 million individuals) were 65 or more elder. China's elderly emergency is well in progress.

How are government initiatives boosting sales of IV tubing sets and accessories in India?

Moreover, India is also considered as one of the top countries with infectious diseases in the world, increasing the need for IV tubing sets and accessories in the country. Increasing patient pool due to rise in population, emergence of new diseases, and lifestyle changes are also boosting demand for biopharmaceuticals, which is expected to provide high opportunity for providers of IV tubing sets and accessories.

Primary IV tubing sets are expected to hold the highest share, as the tubing sets have an effective and rapid way to deliver drugs and liquids to patients. These tend to be utilized in a few cases such as specialized medication delivery, dehydration, and electrolyte imbalances.

These tubing sets are presented in the patient's body utilizing catheters, which are then bolted with a male Luer lock, permitting smooth delivery of liquids. These are utilized to build the length of primary infusion set and are accessible in an assortment of configurations. The extensive usage of primary IV tubing sets is the main factor advancing segment development.

The peripheral intravenous catheter insertion segment is expected to contribute maximum revenue share to the global market. In terms of revenue, hospitals accounted for around 40% share in 2020.

These catheters allow the presentation of fluids, blood products, and medications straight into the cardiovascular system, and facilitate quick retention by target organs. This strategy is an intrusive methodology and requires an aseptic procedure for inclusion. Rising awareness among individuals with respect to this methodology and wide scope of availability are expected to support segment development over the estimate time frame.

What is the impact of COVID-19 on the market?

Due to this unprecedented COVID-19 pandemic scenario, the healthcare sector has been the central point to consider its impacts. As importing was halted, it adversely affected the finances of a majority of healthcare companies. Every industry, including healthcare, is suffering from a supply chain crisis.

On the other hand, the good part is that governments and business owners have started looking for alternatives, and this can benefit lower economies to source materials.  Also, COVID-19 has compelled businesses and investors across the world to reconsider their own growth strategies and expertise.

On the other side of the COVID-19 crisis, there has been a notable adverse impact on the medical device market, including IV tubing sets and accessories, due to the shortage of manpower and increasing focus of manufacturers on investing in COVID products. Several infusion therapy businesses have been affected significantly, which is having a direct impact on the growth of the market for IV tubing sets and accessories.

Companies are constantly launching new products in the market. Furthermore, companies are striving hard to develop and achieve regulatory approvals for new procedures and interventions.

Given the consolidation in the market, bigger players are focusing on increasing collaborations with other market players.