Seaweed cultivation by aquaculture accounts for 5%-10% of the world’s aquaculture production. Furthermore, red seaweed and brown seaweed are the second- and third-largest species in the global aquaculture market.

Demand for products offering several health benefits is witnessing an upward trend across regions. Macro-algae, commonly known as seaweed, is one rich source of food antioxidants and vitamins.

Seaweeds are versatile ingredients that can be utilized in a broad range of food applications owing to their low-calorie content and nutrient-dense characteristics that they offer to food formulators. Despite this nutritional profile, demand for seaweed is still low outside Asia.

Seaweeds are also used in supplements by consumers who require alternative sources of proteins in their diets. Edible seaweed is a sustainable source and has the potential to provide micronutrients and macronutrients to humans.

The spotlight on the bioactive components of seaweed, which have probable applications in the functional food and nutraceutical industries, has led to the recent spike in the demand for seaweed.

As per Persistence Market Research’s study on the global seaweed cultivation market, between 2022 and 2032, the market is expected to rise at a CAGR of 7.8%. 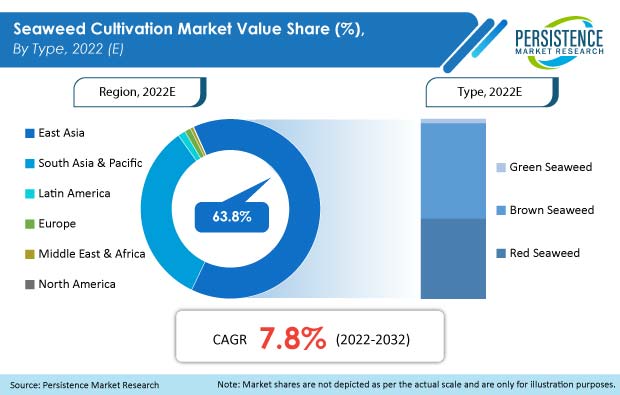 “Seaweed Contributing to Food, Nutrition, and Other Industries”

Human consumption of seaweed dates back centuries, with around 700 edible seaweed species. Being naturally free of intrinsic toxins, seaweeds are considered edible and many coastal communities have a cultural tradition of consuming seaweed.

Seaweeds are nutritious aquatic foods that are generally rich in dietary fibers, micronutrients, and bioactive compounds, and are often treated as healthy, low-calorie food, particularly favored by people who prefer low-carbohydrate or plant-based diets.

A major portion of the cultivated seaweed is utilized for direct human consumption. In addition, seaweed is also processed into natural food additives as well as food supplements. Food Hydrocolloids made from seaweed hold significant importance in food, medicinal, and biotechnological industries.

Many companies are also incorporating seaweeds in fertilizers, which activate beneficial microorganisms in the soil and increase crop yield.

Seaweed farming is an economical harvesting practice combined with the ease of handling and technological advancements, which is encouraging people to consider this as a profession across countries. Seaweed cultivation is boosting the living standards of coastal populations and helping promote the use of coastal and marine resources in day-to-day activities among them.

Apart from this, many governments have set up policies and are offering funds to support seaweed cultivation practices. Evidence-based laws and regulations backed by science on seaweed farming play an important role in the sector’s sustainable development.

Today's solutions for seaweed cultivation are time- and resource-demanding, yet yielding low volumes per year globally, while there is huge untapped potential. Standardization of equipment and automation can be one way to upscale production. The technology to scale seaweed production is progressing, making large-scale seaweed cultivation perfect to aim for sustainable harvesting of the canopy for food, fertilizer, pharmaceutical, and other industrial uses.

Companies are also moving forward with the implementation of cutting-edge technologies such as machine learning, IoT (Internet of Things), and artificial intelligence to improve seaweed cultivation and monitor seaweed biomass.

Seaweed production, processing, and utilization have grown exponentially in recent years, which has fueled innovation in this sector. With the advent of new extraction technologies and enormous applications of seaweed, the opportunity for discoveries is even bigger.

For instance, there is a growing trend of ‘plant-based’ or ‘meatless’ foods among consumers around the world. However, plant-based burgers may not necessarily be better for the environment. Most plant-based products are still resource-intensive since they require lots of fresh water, land, and fertilizers to grow.

Oceanium, a Scottish start-up, has developed seaweed-based and marine-safe bio-packaging. The products are made from farmed seaweed to meet the demand for sustainable packaging alternatives.

A major factor confining market growth is limited or uncertain demand for seaweed across regions. Though in most East Asian countries seaweed is consumed directly as food, there is little or no exposure or preference to seaweed outside East Asia.

Uncertainties and concerns over the safety of seaweed products are posing challenges to the promotion of their consumption in new markets where food safety regulations are stringent.

Non-food applications of seaweed, including pharmaceuticals, nutraceuticals, animal feed, cosmetics, bio fertilizers/bio stimulants, bio-packaging, textiles, and biofuel, among others, are offering promising opportunities. Yet they face economic, technical, and other market constraints, making it unclear which of these applications will be a major driving force for further market growth.

Which Country Shows Dominance in the South Asia Market?

ASEAN countries are major contributors to the seaweed cultivation market with a valuation of US$ 6.17 Bn in 2022.

Among these countries, Indonesia holds a major market share of over 80%. Indonesia is a major contributor of hydrocolloid seaweeds to the global market. The tropical climate and extensive coastline of Indonesia support seaweed farming; however, only 20% of the coastline available for marine cultivation has been explored, which leaves huge scope for further growth.

Why is South Korea a Favourable Country for Seaweed Cultivation?

Red and brown algae are the major varieties that represent over 90% of South Korea’s seaweed production.

Which Seaweed Form is Highly Preferred by Consumers?

Powder seaweed is most preferred for utilization in various applications. This powdered seaweed is easy to incorporate into a variety of food products and nutraceuticals, leading to an increase in demand.

What Type of Seaweed is Mostly Cultivated around the World?

Market players are also prioritizing innovation and are investing in research and development activities.

What is the value of the global seaweed cultivation market?

How fast is the seaweed cultivation market expected to grow?

Worldwide demand for seaweed cultivation is expected to increase at 7.8% CAGR through 2022.

Which country is showing high growth potential in East Asia?

The Japan seaweed cultivation market is forecasted to surge at 8.5% CAGR through 2032.

Which market holds the largest value share in Europe?

Who are the leading seaweed cultivators in the market?

How are the U.S. and France seaweed cultivation markets shaping up?

Which Latin American countries are leading the market in the region?

Major market share is held by Chile, followed by Mexico. The Chile market is slated to expand at a value CAGR of 8.9%.

The global flaxseed market is set to experience a growth of around 6% CAGR in value over the 2020 to 2030 forecast period..

The plant-based creamer market is expected to experience very high growth in these regions in the coming years. .

According to the report, numerous factors contribute to the growth of the plant-based snacks market, which is projected to record a striking CAGR of over 8% through 2028. .

Oat Milk Market is set to experience value growth around 7% CAGR over the next ten years..