Market growth in terms of CAGR from 2016 to 2020 for the bone mineral densitometry market has been observed as 2.8%, wherein, axial bone densitometry had the highest market share of 68.7% in 2020.

A large population pool is suffering from osteoporosis and osteoporosis-associated fractures, which are on a surge year-on-year, leading to increasing demand for bone mineral densitometers installation in healthcare settings.

With the emergence of 3D modelling and various visualization software, manufacturers are focusing on technological advancements of volumetric scanning, which will pave the path for developing new opportunities in bone health management, identifying future risks of fracture, and implementing preventive measures. Key market players are using collaborative approaches for the distribution and manufacturing of these products through various channels.

According to the International Osteoporosis Foundation, worldwide, osteoporosis causes more than 8.9 million fractures each year, with one in three women and one in five men over 50 years sufferings from an osteoporotic fracture. Osteoporosis is estimated to affect 200 million women worldwide – approximately one-tenth of women aged 60 years and above.

According to the International Osteoporosis Foundation, by 2050, worldwide incidence of hip fracture in men is projected to increase 310% and 240% in women as compared to 1990. This high prevalence of osteoporosis and osteoporotic fractures will drive demand for bone assessment.

Bone mineral densitometry sales forecasts are that, over the forecast period of 2021-2031, the market will expand at more than 3.5% CAGR.

What are the Key Opportunities for Bone Mineral Densitometer Manufacturers?

Further, adoption of 3D visualization and modelling will open door to new diagnostic approach will give a significant opportunity for manufacturers to grow in this market.

Increasing spending on healthcare infrastructure will attract manufacturers to provide requirements and specification to establish scanning facilities to evaluate various applications and in turn will create opportunities in this market.

What is the Main Restraining Factor for Bone Mineral Densitometry Suppliers?

High price of bone densitometers and stringent government regulations are expected to hamper sales of bone mineral densitometry. DXA technology is relatively expensive and is not widely available in most developing Asian countries, especially in rural areas.

There has been a rising trend of installing refurbished bone densitometers due to high price of the equipment. This will pose as a challenge to the growth of this market.

Women lose 30% to 50% of bone density with increasing age. Loss of bone speeds up dramatically after menopause due to the loss of estrogen. Of the estimated 10 million Americans with osteoporosis, around eight million are women. Thus, postmenopausal women are highly likely to develop osteoporosis. Nearly one-half of postmenopausal women and one-sixth of men aged 50 years and older would be recommended for osteoporosis treatment.

The aging population is inevitably going to become more osteoporotic. Fractures caused by osteoporosis most often occur in the spine. These spinal fractures occur in nearly 700,000 patients each year. Hip fracture is more common in older people. Each year, more than 300,000 people in the U.S. sustain a hip fracture. Most of these fractures occur in patients 65 years or older.

One in two women over age 50 will have a fracture caused by osteoporosis. There are a lot of women who are unaware of osteoporosis or don’t consider it a health problem.

To help fill the knowledge gap, Radius Health launched the “Fractured Truth” public education initiative that seeks to drive understanding of the connection between fractures and osteoporosis, and empower women to have better conversations with their healthcare providers about their bone health. 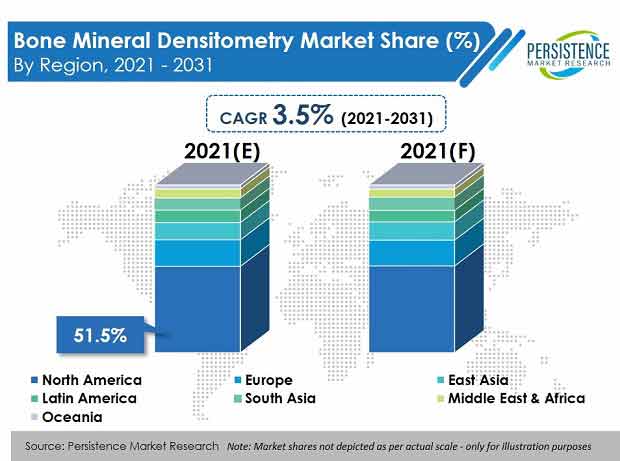 What Makes the U.S. a Large Market for Bone Mineral Densitometry?

The bone mineral densitometry industry survey shows that the U.S. dominates the region of North America with a market share of 72.8%, and is projected to experience high growth throughout the forecast period.

According to the U.S. Department of Health and Human Services, an estimated 10 million people aged 50 years and above is suffering from osteoporosis. According to National Health and Nutrition Examination Survey, prevalence rate of osteoporosis in older adults was around 13%–18%.

Approximately 10 million Americans have osteoporosis and another 44 million have low bone density, placing them at increased risk. The disease is responsible for an estimated two million broken bones per year, and yet, nearly 80% of older Americans who suffer bone breaks are not tested or treated for osteoporosis. This large population suffering from osteoporosis and associated fractures is propelling demand for bone mineral densitometry in the country.

What is the Market Scenario of Bone Mineral Densitometry in Germany?

Germany leads the European market for bone mineral densitometry, and will continue to exhibit growth close to 4% CAGR during the forecast period. The factor contributing to growth is high number of people with osteoporosis and vertebral fractures.

According to 2015 data of the International Osteoporosis Foundation, estimated number of individuals aged more than 50 with osteoporosis was 5.3 million in Germany, with prevalence being high among women at 22.5%.

How Lucrative is the Russia Market for Bone Mineral Densitometry?

Russia holds a significant position in the region of Europe, with a market of US$ 11.1 Mn in 2021. According to a study, it is estimated that, 14 million people in Russia suffer from osteoporosis, with a significant proportion of cases at high risk of fracture.

In some Russian cities, lack of hospitalization and surgery following hip fractures lends itself to an extremely high re-fracture rate during the first year following a fracture. Of those who survive hip fractures, only 9% return to their previous level of daily activities.

Why is China an Emerging Market for Bone Mineral Densitometry?

This huge number of osteoporosis and osteoporotic fractures brings a tremendous cost burden. Detection of bone mineral density is an efficient method to manage and avoid fracture risk.

What is the Outlook of the Bone Mineral Densitometry Market in India?

India dominates the South Asia market with a current market share of 58.8%, and is projected to expand at a CAGR of 4.7%. Rising spending on healthcare is expected to boost the market for bone mineral densitometry in India.

India has a population of approximately 100 million aged 50 years or more. The Indian population is highly deficient in vitamin D, a nutrient required to prevent bone loss and osteoporotic fractures. According to a 2013 study, 50 million people in India have less than 1 T-score, a measurement scale for bone mineral density.

Why is Demand for Axial Bone Densitometry Higher?

Axial bone densitometry accounted for the largest market share of 68.7% in 2020, as it is for the detection of bone density in central sites, including the vertebral column, ribcage, and pelvic region. Quantifying the density or mass of bone mineral developments in these regions is complex because the bones are embedded in greater tissue thicknesses of more variable composition.

Whereas, for peripheral sites, which include the forearm and foot, single-energy X-ray absorptiometry (SXA) and ultrasound measurements are available.

Also, there are higher cases of hip and spinal osteoporosis and fractures globally, which will lead to a surge in the demand for axial bone densitometry.

Why is DXA Technology in High Demand for Bone Mineral Densitometry?

DXA technology holds a significant revenue share of 64% due to higher installation and requiring less radiation exposure than X-ray radiography and CT Scanning. Also, DXA for the hip and spine is highly recommended by the National Osteoporosis Foundation.

How Has COVID-19 Impacted the Bone Mineral Densitometry Space?

The World Health Organization (WHO) announced COVID-19 as a world health emergency in January 2020. The pandemic crisis is challenging governments to implement fiscal policies and monetary measures that sustain economic activity and support credit markets.

The healthcare budget across COVID-19 affected countries has increased significantly, with most funds being directed toward COVID-19 care. This has largely affected the medical device industry.

Due to lockdowns and shortage of manpower, research & development activities as well as commercial production of bone densitometers significantly decreased all over the world. As hospitals and clinics are more focused on treating COVID-19-infected patients, there has been a decline in patient footfall for osteoporosis treatment. Year-on-year revenue dropped to 2% in 2020.

Key players are focusing on expansion in emerging countries and introducing features in their product lines. Various manufacturers are spending on developing integrated software that include cutting-edge technologies to understand bone geometry, volumetric analysis of cortical bone thickness, and calculate bone mineral density.