Global Market Study on Antibody Library Technologies: Phage Display Segment by Technology to Register a CAGR of 5.0% During 2016–2024

Phage display is now one of the key drug discovery technologies and unlike in vivo technologies, phage display is not limited by immunological tolerance and toxicity to an animal. Thus, the popularity of phage display as a drug discovery tool is further increasing. The Phage Display segment is the largest segment among the four technology segments in the global antibody library technologies market and accounted for a little over 55% market share in 2016. This segment is anticipated to reach a market valuation of about US$ 100 Mn by the end of 2024, registering a CAGR of 5.0% during the forecast period.

The Yeast Display technology segment is expected to create incremental dollar opportunity of US$ 9.3 Mn between 2016 and 2024. Mammalian Cell Display being a relatively new technology is the least attractive segment by technology in the global antibody library technologies market and represents a market attractiveness index of 0.3.

Despite the fact that the phage display system is broadly utilized for protein and neutralizer designing, the technology is exceptionally prejudiced. Moreover, phage display system is exorbitantly repetitive and is more difficult as far as candidate’s identification is concerned.  Another essential admonition of all molecular display systems is the background binding between the display system and the target antibody or protein. Unfavorable restricting may bring loss of high-affinity ligands as it might degenerate proper selection because of a large number of false positives. This factor is restraining the growth of the phage display segment of the global antibody library technologies market.

Despite the fact that phage display and other molecular display systems are operative devices for antibody based drug discovery, numerous small-scale biotechnology organizations still utilize well-established hybridoma technology for the revelation of neutralizer medication competitors.  Other conventional technologies are being favored over the molecular display method, such as transgenic creatures harboring, tissue culture techniques and so on. Eccentric hybridoma technology for the monoclonal antibody is an impediment to the growth of the technology segment in the global antibody library technologies market.

In vitro production methods comprise a still-evolving field in finding new therapeutics and the lack of inclination to adopt new techniques by some small-scale biotechnology companies limits the widespread use of in vitro techniques. Moreover, a majority of MAB produced using these methods is for research grade, and thus is not used in clinical studies. This has led to the lack of awareness of regulatory pathways for therapeutic use of MAB produced in vitro. This presents a significant challenge for small biotechnology companies that have a potential therapeutic MAB candidate, but are not in a position to commercialize it due to the lack of full knowledge of regulatory procedures. 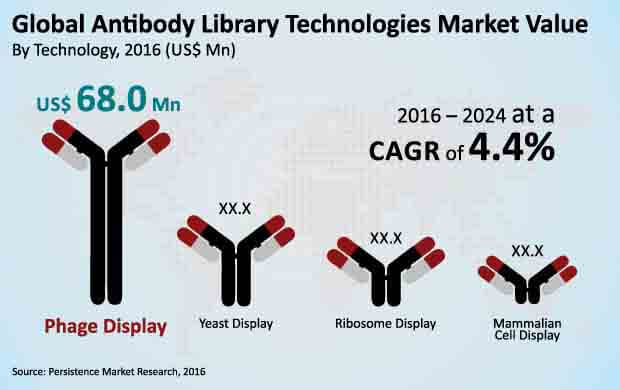 Government initiatives for the production of cost-effective monoclonal antibodies in the U.S. is expected to stimulate the use of antibody library technologies in North America

Collaborations and cross-licensing are the key strategies adopted by a majority of players in the global antibody library technologies market. In a new publication titled “Antibody Library Technologies Market: Global Industry Analysis and Forecast, 2016–2024,” the analysts at Persistence Market Research have observed that antibodies being a most successful biotechnology drug class, pharmaceutical companies are striving to add antibodies to their pipeline in order to alleviate patent cliff. While studying the various market segments the expert team of analysts have noted that North America represents the most lucrative regional market, followed by Europe and APAC. Another key observation is that despite phage display being the fastest growing technology, yeast display system is becoming a choice of technology due to the improved quality of MAB obtained through it. This report provides useful information regarding transitions in the business value proposition of key players. For instance, MorphoSys AG has set a goal to build the most valuable biopharmaceutical pipeline in the biotech industry and in line with this, the company is shifting its focus from technology licensing to drug development.

Why are Antibody Libraries not widely perceived as research reagents?

Although the antibodies selected by in vitro method are very powerful, the technology is not widely perceived as a valuable research reagent. The primary reason is a patent situation, which limits the use of this technology to high margin therapeutic markets. In contrast, classical hybridoma technology was never patented and thus achieved widespread acceptance in academics as well as for commercial purposes within a short period of time. However, some of the phage display patents are about to expire in the next few years while some have already expired, which may result in wide acceptance of the new technology. This technology is largely unnoticed by the research community due to the dominance of traditional hybridoma technology in most of the markets. For instance, some of the commercially available monoclonal antibodies are actually obtained by phage display screening but are reformatted to resemble murine antibodies.

The analysts have developed questionnaires for each node in the value chain to extract the required market information through primary research interviews. Persistence Market Research has adopted systematic exhaustive secondary research to analyze the required data points to arrive at the overall market numbers. Data is validated using the triangulation method, wherein secondary, primary and Persistence Market Research analysis contribute to the final data. Yearly change in inflation rate has not been factored in while forecasting market numbers. Bottom-up approach has been used to assess market numbers for each product category, while top-down approach has been used to counter-validate the reached numbers. Indicators such as R&D expenditure, research funding from government and non-profit organizations etc. have been considered to arrive at the indicated market numbers. Historical consumption trend has been analyzed to track market data. Secondary research includes various company websites, annual reports_bk_01_01_2020, white papers and financial reports_bk_01_01_2020, while paid publications for research include Factiva, GBI, Genios and Meltwaters.