Historically, from 2016 to 2020, use of animal healthcare products increased at around 4% CAGR, wherein, developed countries such as the U.S., Canada, Germany, and the U.K. held significant share in the global market.

The market is majorly boosted by considerable increase in the need for protein food and rise in occurrence of food-borne and zoonotic diseases across the world. This remarkable increase in disease occurrence has prompted companies to manufacture advanced pharmaceuticals and vaccines.

Additionally, with increase in the amount of livestock, interest for appropriate animal health monitoring solutions has risen all around the world. As per FAO, livestock represents roughly 40% of worldwide agricultural output.

Rising initiatives by different governments across regions have enhanced animal healthcare and led to the growing interest in veterinary vaccines. For example, in 2019, the Food and Agriculture Organization of the United Nations (FAO), in association with the Ministry of Fisheries and Livestock, introduced a cattle vaccination drive in the territories of Kwilu and Kwango in the Democratic Republic of the Congo.

Considering these statistics and shift in dynamics, the market for animal healthcare is forecast to expand at a healthy CAGR of more than 4% over the coming 10 years.

What are the Key Opportunities for Animal Healthcare Product Manufacturers?

With increase in incidence of diseases in animals and growth in animal population, there has been expanded concentration on the development of drugs for animal care. Various animal diseases arise each year, which provides opportunities for medicine-manufacturing companies to launch developed animal health products.

Consequently, companies are effectively funding research & development for the treatment of new and prevailing animal diseases. Diseases such as the Nipah infection (NiV) disease, porcine, bluetongue, melioidosis, and respiratory and reproductive syndromes are far and wide nowadays, and are providing lucrative opportunities for major market players. 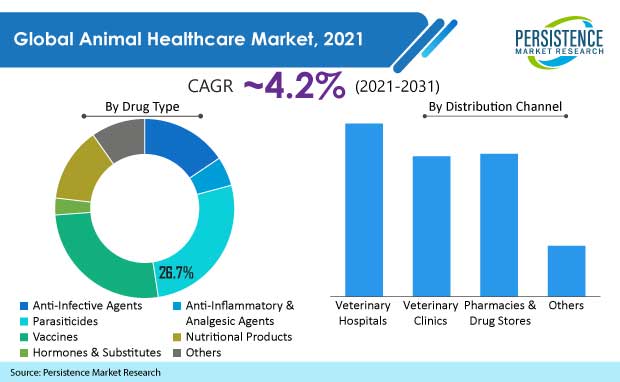 As there is consolidation in the market, major players are concentrating on acquisitions and mergers to explore lucrative opportunities. Leading players are additionally concentrating on enhancing their commercializing efforts by following administrative guidelines. These trends are being effectively followed across all regions of the world.

What Makes the U.S. the Largest Market for Animal Healthcare?

The market size of U.S. is estimated to be around US$ 10 Bn in 2021 due to increase in the number of pet animals over the last few years.

The Society for the Prevention of Cruelty to Animals, in Los Angeles, published that the amount of adoption almost doubled in June 2020, with every day adoptions of around 10 to 13. This increasing adoption of pets is boosting the development of the market for animal healthcare in the country.

As indicated by APPA (American Pet Products Association, Inc.), around 67% of U.S. residents owned a pet in 2019 in contrast with 56% in 1988. Rising number of pet owners, technological advancements, and increasing occurrence of zoonotic diseases are projected to drive market development.

Why is Demand for Animal Healthcare Products Flourishing in the U.K.?

The market size of the U.K. was valued US$ 1.3 Bn in 2020, and is expected experience lucrative growth during the forecast period. U.K.'s animal healthcare market has been exhibiting strong development since the last decade in terms of usage of developed technologies, including artificial intelligence (AI), genomics, and biotech.

In addition, companion and veterinary animal spending in the U.K. reached more than US$ 6 billion in 2019 up from around USS 4 billion in 2016.

How Will Increasing Uptake of Technology in Animal Husbandry Surge Demand for Animal Healthcare in India?

The market in India is expected to show lucrative growth and expand at a CAGR of over 7% through 2031. Major factor driving the market is the flourishing animal husbandry in the country.

Animal husbandry significantly adds to the GDP of India. This can be attributed to the agriculture-based culture as a major part and backbone of the economy. Rural individuals and also some people in metropolitan areas rely on cattle such as goats, buffaloes, and cows that give meat and milk.

With increasing focus on the quality of animal products, small and big companies are entering the market, and animal husbandry is becoming technology-driven. This will lead to a lot of focus on controlling episodes of old and new animal diseases, aiding market expansion.

What Factors Make China a Lucrative Market for Animal Healthcare?

The market in China is estimated to be valued US$ 2 Bn in 2021, and grow at a rapid rate. China’s animal healthcare industry is basically boosted by increasing popularity of pet ownership, more spending on animal healthcare, and increasing awareness about different treatments available for animal diseases.

In the recent past, there has been a sharp rise in the adoption of cats and dogs across the country. As indicated by the National Bureau of Statistics of China, it has been assessed that China is the third-biggest nation as far as dog ownership is concerned, with 27.4 million pet dogs, standing after the Brazil and the United States, with around 35.7 million and 55.3 million dogs, respectively.

Why is Demand for Parasiticides Continuously Rising?

Based on drug, parasiticides are leading the market and are expected to hold more than 23% share of the revenue over the forecast period. The worldwide market is boosted by rising focus on animal health against the backdrop of increasing adoption of pets and concerns about the safety of food sources of animal origin.

Customer tendency toward animal-derived food products, inflowing ventures from privately-owned businesses, and increasing concerns with respect to zoonotic diseases are key elements boosting the development of the global market for animal healthcare.

What’s the larget Share of Farm Animals in the Animal Healthcare Industry?

The farm animals segment represented the largest market share of US$ 21.2 billion in 2020, prompted by increase in the amount of farm animals across the globe. Factors such as rising meat consumption and increase in demand for animal-based products are adding to market development.

According to a USDA Foreign Agricultural Service (FAS) report, there has been rapid increase in worldwide beef consumption, from 127 billion pounds in 2015 to more than 134 billion pounds in 2018. Subsequently, increasing utilization of animal protein combined with rising interest toward dairy products will support product development.

Which is the Most Preferred Route of Administration for Animal Healthcare Products?

Solid dosage forms such as capsules and tablets have a higher level of drug stability and give accurate measurements. Oral drug delivery is the most favoured because of factors such as convenient to handle, non-invasive, high patient compliance, and not requiring particular sterile conditions.

Which is the Largest Distribution Channel for Animal Healthcare Providers?

Veterinary hospitals accounted for the largest share of 34.7% in 2020. This is due to different applications such as clinical toxicology tests, and therapy, and clinical pathology.

Availability of a broad range of diagnostic options along with treatments at veterinary hospitals is driving this segment. Moreover, rise in occurrence of zoonotic diseases brought about by climate change and globalization is relied upon to boost the need for diagnostic procedures, which will help further segment development.

There is consolidation in the market, with the presence of leading players operating in this space. Companies are aiming at strategic collaborations and acquisitions with other manufacturers to expand their product manufacturing and address the demand of an expanding patient pool.

Manufacturers are also focusing on the expansion of their product portfolios by launching technologically advanced products and receiving approval from different government bodies.

Similarly, recent developments related to companies manufacturing animal healthcare products have been tracked by the team at Persistence Market Research, which are available in the full report.

The Orthopedic Veterinary Implants Market is expected to have a CAGR of 9% over the forecast period 2022 – 2026.

The global animal drug compounding market is set to witness healthy growth at a CAGR of 8% over the forecast period of 2021-2031, with value estimated to top US$ 4 Bn by the end of 2031..