According to Persistence Market Research, CNS agents enjoyed a market value of US$ 661.8 Mn in 2021, accounting for nearly one-third of the global market share. Animal drug compounding accounted for nearly 18% share in the global compounding pharmacies market in 2021.

The global market for animal drug compounding solutions expanded at a CAGR of 5.8% over the last five years (2016-2021).

The spectrum of therapeutic needs in veterinary medicine is relatively huge, and the availability of approved drug products is comparatively limited for all veterinary species and indications. Consequently, drug compounding for animals is of great importance to fill the therapeutic gaps for these non-human species.

Compounded medications provide various therapies for animals when appropriate government-approved products are not available. Commercially approved products in particular dosage forms are recommended for use in certain species; for example, chewable tablets that are not suitable for use in other animals such as cats or exotic animals.

Likewise, some commercially approved products are disliked by certain animals due to their taste. In such a case, compounding is preferred, particularly for those drugs that are difficult to medicate.

The global animal drug compounding products market is predicted to surge ahead at a CAGR of 8.2% and record sales worth US$ 4.03 Bn by the end of 2031. 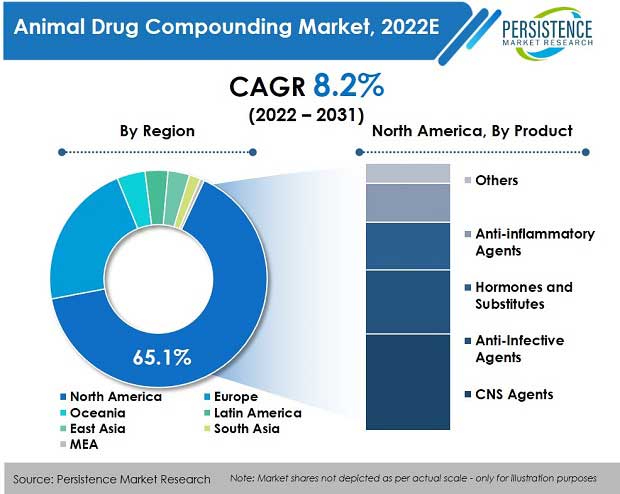 What is the Market Outlook for Animal Drug Compounding Manufacturers?

Thus, regulatory accredited facilities with attractive offerings are expected to gain. This results in opportunities for manufacturers to collaborate with such associations and grab opportunities in the market.

Availability of generic veterinary drug substitutes is limited due to non-availability of favourable reimbursement for veterinary treatment. Most branded drugs are available for animal treatment. In such circumstances, most animal owners got for compounded medications that are cheaper than branded equivalents, easily available, and do not require a prescription.

In the case of formulation of standardized guidelines for compounded preparations in the veterinary space, a larger amount of revenue can be gained.

Regulatory inspections of drug manufacturing facilities are expected to increase for compounding pharmacies for adherence to good manufacturing practices (GMP).

If these more than 3,500 specialty pharmacies in the U.S. obtain FDA and PCAB certification, it could drive the uptake of customized drugs and eventually lead to better animal welfare.

Lack of any legal requirements to determine the exact desired strength of compounded preparations as indicated on the prescription label has compromised animal care in several ways. This is one of the prominent factors dampening the sales of compounded animal drugs.

Why are Animal Drug Compounding Providers Targeting the U.S. Market?

“High Animal-related Spending in the U.S.”

The U.S. dominated the North America animal drug compounding market in terms of market share of 88.6% in 2021, and is expected to retain its top position throughout the forecast period.

According to World Atlas data, in the U.S., one in three households owns a cat, with an average of 2.2 cats per cat-owning household. The total cat population in the country was estimated to be around 76.5 million. Interestingly, in 2019 Americans spent more than US$ 52 Bn on their pets.

High spending on animal care is set to result in high demand for animal treatment in the United States.

How is Demand for Animal Drug Compounding Shaping Up in Germany?

In terms of value, Germany accounted for 29% of the Europe animal drug compounding market in 2021. This high market share is owing to the presence of active major players in this industry, which has increased the availability of products in the country.

Also, growing awareness regarding animal welfare and initiatives by German regulatory authorities have resulted in Germany’s dominance in the European market.

Additionally, the U.K. and France are expected to witness high demand growth for animal drug compounding during the forecast period.

Why is China Emerging as a Prominent Market for Animal Drug Compounding?

China is also a lucrative market for animal medical care, especially for pigs and poultry. Thus, China can be considered as an emerging economy in terms of the fastest-developing veterinary drug industries involving animal drug compounding solutions.

CNS agents, amongst all products and services, accounted for the highest market share of 35.9% by revenue in 2021.

Abnormality in limb coordination, behavioural changes, seizures, and blindness are cited as the most common abnormalities in dogs and cats suffering from CNS inflammation.

As CNS agents actively respond to the process and control the nerve function, they account for the highest share in the market.

Which Types of Animals are Expected to Drive High Demand for Animal Drug Compounded Products?

Companion animals are driving high demand for compounded drugs in this market and accounted for more than 54% market share in 2021.

Sometimes, it happens that the pet refuses to take the medication due to a bad taste, which forestalls a prime opportunity for compounded drug products. For example, cats don’t like pills, but they like tuna, and similarly, dogs are offended by traditional medicinal solutions being spurted in their mouth, but gladly eat flavored meat or a tasty biscuit.

Thus, compounded drugs would be happily devoured are the customized formulations. Hence, companion animals are expected to drive high demand for compounded drugs over the forecast duration.

What is the size of the global animal drug compounding market?

What sales is forecasted for animal drug compounding products?

The global market for animal drug compounding solutions is set to witness a high growth rate of 8.2% and reach US$ 4.03 Bn by 2031.

At what rate did the market expand over the past 5 years?

The market expanded at 5.8% during 2016 through 2021, owing to growing demand for customized compounded products over commercially available products.

What is the U.S. market outlook for animal drug compounding?

Which countries are key producers of animal drug compounding products?

The U.S. and Germany are major manufacturers of animal drug compounding products.

How are China and India evolving in this market?

China holds a share of 34.7% in the East Asia animal drug compounding market, and India accounts for 53.4% of the South Asia market.

Global veterinary anti-infectives market is expected to represent a valuation of a little more than US$ 240 mn in 2017 and increase to about US$ 368 mn by 2025.

Animal drug compounding can be defined as a process involving manipulation and customization of approved drug products on a licensed veterinarian prescription..