Global Market Study on Animal Health Active Pharmaceutical Ingredients: Antiparasitics Segment by API Type to Register a CAGR of 7.6% During 2017-2025

The rapidly growing animal health market is a primary driver of growth for animal health active pharmaceutical ingredient (API) market. Factors such as growing focus on animal well being, a surge in the number of animal healthcare NGOs, and unmet medical needs act as other major growth drivers in the market. There has been a significant growth of the antiparasitic API landscape owing to the abundance of pharmaceutical companies in the Asia Pacific region which are involved in the development of antiparasitic API. Anti-infestives is the other segment in the market that is growing rapidly, contributing significant revenue in the market.

The Asia Pacific is known to generate a plethora of opportunities for the manufacturers in the market for manufacturing facilities owing to relaxed government regulations regarding investments. The pharmaceutical API industry is flourishing in regions such as Russia and Brazil with government support for the establishment of new manufacturing facilities. Middle East & Africa are also gaining prominence in the market with the growth in animal health pharmaceuticals landscape.

A number of growing mergers & acquisitions, partnerships, joint ventures, strategic alliances and various other business deals are further strengthening the market and supporting growth. High experience of API manufacturing in developing markets encourages Western animal health market players to collaborate in the Eastern countries, thus increasing the growth opportunities in this sector. Along with internal capacity expansion, external manufacturing or outsourcing is an important component of the animal health active pharmaceutical ingredient market. Furthermore, despite consolidation efforts in the CMO industry, the industry remains fragmented with few major players, thus boosting the outsourcing market. This provides an opportunity for investment in contract manufacturing.

A fast growing animal health market has a positive impact on the overall animal health API market. Global animal population growth and focus on the well-being of animals support market demand. Increase in animal healthcare NGOs, rising pet adoption, productivity improvements, unmet medical needs etc. are some of the factors creating growth opportunities in this sector. Increase in the livestock animal population because of huge demand is associated with the rise in a number of animal diseases and thus the medication demand rises.

Antiparasitic API growth in the global animal health API market is owing to a large number of pharmaceutical industries in the Asia Pacific region especially focusing on antiparasitic APIs. This segment is anticipated to dominate the global animal health active pharmaceutical ingredient market in revenue terms in 2017, and the trend is projected to continue throughout the forecast period. Antiparasitic API is expected to be the most lucrative segment, with a market attractiveness index of 2.1. Persistence Market Research forecasts the antiparasitics API type segment to grow from more than US$ 2,500 Mn in 2017 to over US$ 4,600 Mn by 2025 end. Anti-infectives is expected to be the second largest market for animal health active pharmaceutical ingredients, with a market attractiveness index of 1.3. 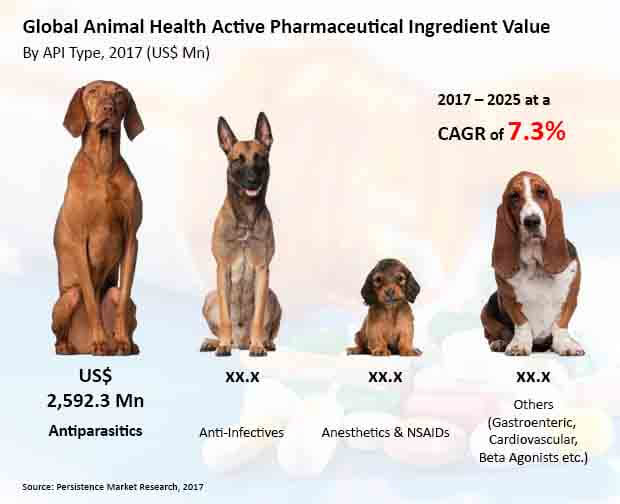 A wide range of human drugs continues to be applied in the veterinary space due to a lack of approved animal therapies, convenience and the rising costs of veterinary research. This is a huge threat to the overall animal healthcare pharmaceutical business. The animal health API market is highly fragmented, greatly affecting the overall business as in pricing regulations, stringency in rules and regulations, monitoring difficulties etc. Further, illegal market threats such as selling of APIs directly to animal owners for use as drugs affects the whole value chain and the B2B API business.

API consumption patterns are different from production patterns over the globe, as Asia Pacific has the largest market size in producing animal APIs and North America has the highest consumption because of a large number of big pharmaceutical companies present in the region along with a high demand for animal pharmaceuticals in the region. A newly published report by Persistence Market Research titled “Animal Health Active Pharmaceutical Ingredient Market: Global Industry Analysis (2012-2016) and Forecast (2017-2025)” targets the market from the production side and represents the market share of different regions that are into the production of animal APIs. This report is targeted towards the five global regions including North America, Latin America, Europe, Asia Pacific and the Middle East and Africa. By API type, four key segments are considered such as Antiparasitics, Antiinfectives, NSAIDs & Anesthetics and the other APIs such as Anticancer, Gastroenteric, Cardiovascular, and Beta Agonists.

After studying this market in detail, we have considered only the APIs sold to third parties. The therapeutic segment contains drug class that is only mentioned in the definitions section. Scientifically, this segment consists of a large number of therapeutic classes but in the report, they are segmented according to operating business. APIs specifically used for animals are considered in the report instead of APIs used for the manufacturing of both human and animal pharmaceuticals. However, APIs manufactured by any company for its self-consumption is not included because of non-tracking information.

The report focuses on strategies adopted by key players

The key players operating in the global animal health active pharmaceutical ingredient market have adopted various strategies to stand firm in the competitive global market. For instance, Lonza Group AG has focused on strategic agreements and investments in emerging economies, while Ofichem BV has focused on further expansion of the group by collaborating with other organisations and has also invested in facility upgradation. The key focus of Shaanxi Hanjiang Pharmaceutical Group Co., Ltd., is on outsourcing the APIs and cooperative development on API and pharmaceutical intermediates. Strategic cooperation relationships with big international players and focus on anthelmintic veterinary API products is the strategy followed by Changzhou Yabang Qh Pharmachem Co., Ltd.

Indicators such as R&D expenditure and research funding from government and non-profit organizations have been considered to arrive at the indicated market numbers. Top-down approach has been used to assess market numbers for each product category and region. We have taken a detailed overview of the changing market dynamics of the animal health active pharmaceutical ingredient market to get a clear picture of the overall market. The report also highlights recent industry trends and developments, market strategies of key players and product offerings, market segmentations and market size by volume and value. This report also consists of historical demand trends, animal health active pharmaceutical ingredient market growth rate, financial performance of top companies across the assessed regions, macro-economic indicators such as GDP and population growth and the influence of increasing disposable income. Besides, market definition, types and applications of global animal health active pharmaceutical ingredient market, demand and supply side drivers, restraints, opportunities and trends and market taxonomy have also been included in this exclusive report.

We have adopted a systematic research approach while inspecting this market. In-depth secondary research is used to arrive at the overall market size, top industry players, top products and industry associations. Our analysts have formulated a detailed discussion guide in order to conduct comprehensive interviews with industry experts, key market players, distributors and retailers. Data is validated using the triangulation method, wherein primary and secondary data along with Persistence Market Research analysis contribute to the final data.