3D cell culture has mostly been used in cancer research, as cancer cells are more responsive to culture in vitro. In addition, 3D cell culture is efficiently proficient in detecting target and non-target reactions and interactions on the candidate drug. It can help in sorting potential drug molecules and during the study of the ‘in-vitro’ conditions, 3D cell culture models mimic natural environmental conditions. Key manufacturer such as Merck KGaA, Thermo Fisher Scientific, Inc., Becton Dickinson & Company have their distribution facilities, manufacturing sites, and offices globally. Emergence of e-Commerce also aids in increasing the availability of 3D cell culture products from prominent players.

Future of 3D Cell Culture Market Even Brighter than Before

Application of animals for testing and research has created ethical issues being highlighted by animal welfare organizations. As per the Humane Society International in 2019, 115 million animals were used for animal testing, worldwide, every year. 3D cell culture is anticipated to substitute animals for testing in laboratories. Government and non-profit organizations such as The Environmental Protection Agency, the National Toxicology Program, and the National Institutes of Health launched the ToxCast initiative, amongst others, to substitute laboratory animals with 3D cell culture. Such movements and increasing awareness create opportunities for the expansion of the 3D cell culture market size over the forecast period, which is projected to expand at a CAGR close to 10% through 2031.

What is the Impact of Market Consolidation Activities on 3D Cell Culture Demand?

Given the union in the market, key players are focusing on strategic acquisitions at regional levels. This trend is observed across North America, Europe, and Asian countries such as China and Japan.

Acquisitions empower companies with products and increase their portfolio. The company which has been acquired possesses well-established products and solutions, which become a good revenue source for the acquirer. This also enables the company to enter new emerging markets as well as enhance existing market shares.

The conventional processes of drug discovery are less relevant and inadequate for significant growth of the life science industry. For better humanized medicines and therapeutics, 3D cell culture is effectively used to observe non-target and target reactions and interactions on the candidate drug. Moreover, 3D cell cultures are anticipated to hold significant revenue share for cancer therapeutic and drug discovery application.

Novel innovations to discriminating living tissues such as metabolic functions, nutrient transport, and respiration to accurately determine drug properties are driving 3D cell culture demand. As per a report of the International Federation of Pharmaceutical Manufacturers & Associations, more than twenty five percent expenditure is on drug discovery. Implementation of 3D cell culture for drug discovery saves money and shortens the process time, contributing to higher demand across regions.

Why are Advanced Manufacturing Activities Key to Market Growth?

Key players in the market are focused on increasing their product features and portfolio to strengthen their position in the market, and also to expand their footprints in emerging markets. Players are entering the market with novel and innovative 3D cell culture, with features such as magnetic levitation, better respiration, and others, to differentiate themselves and generate increased revenue. Manufacturers in North America and Europe are focusing on expanding their range of 3D cell cultures by producing products specific to applications such as stem cell research, drug discovery, and spheroid tumor models. 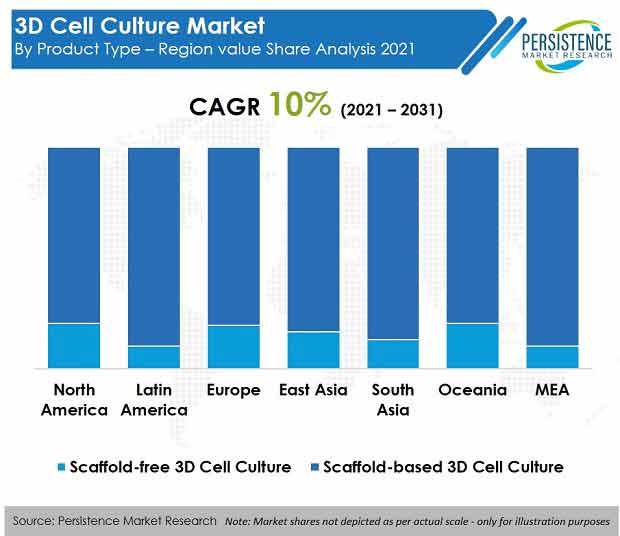 Why Does Japan Witness Significant Demand for 3D Cell Culture?

Cell-based assays have been widely used in drug discovery for several decades. 3D cell culture plays a vital role in drug discovery. Japan is the 3rd-largest pharma industry in the world. In addition to this, Japan has a high number of domestic pharma companies. Furthermore, the Japanese government provides financial support for ongoing life science research. Hence, demand for 3D cell culture is high in in the country for drug development and life science research purposes.

How Will Increasing Focus on Oncological Research in the U.S Surge 3D Cell Culture?

What is the Impact of Increasing Demand for Regenerative Medicine on the Indian 3D Cell Culture Market?

How is the Presence of 3D Cell Culture Companies Aiding the European Union?

Germany will continue leading the 3D cell culture market in Europe, and is expected to experience significant growth over the coming years. As per Persistence Market Research analysis, France will also progress substantially in this space. Some prominent players such as Merck KGaA, Lonza, Thermo Fisher Scientific Inc., and Becton, Dickinson and Company are present in Europe, which creates notable revenue for the region. Moreover, research & development activities in Germany are also creating a surge in demand for 3D cell culture in the country. Adoption of 3D cell culture amongst researchers is higher in Germany and France as compared to other neighboring countries in the region.

How is Increasing Demand for Biopharmaceuticals Impacting the 3D Cell Culture Industry?

Biopharmaceuticals are medications (therapeutic items) made through genetic manipulation of living cells or organisms. With rising prevalence of infectious diseases such as bacterial and viral infections, demand for biopharmaceuticals is also growing. Specially, the gene therapy and cellular therapy section is developing and is a standout amongst the most dynamic and promising pipelines in the biopharmaceuticals market. Gradually, maximum vaccine manufacturing processes will involve the use of cell strains and cultures made up of only a single type of cell. Biopharmaceuticals have become a rapidly growing sector in the pharmaceutical industry. Above 200 biopharmaceutical products are being marketed and many more in the development phase.

The global market is dominated by top manufacturers - Corning Incorporated, Greiner Group AG, Thermo Fisher Scientific Inc., Merck KGaA, and Becton, Dickinson and Company, Lonza. Major manufacturers are focusing on the development of a wide range of 3D cell cultures. Moreover, key players in the 3D cell culture market are focusing on enhancing their global and regional presence through acquisitions and expansion strategies.

Q1. Which is the most lucrative market for 3D cell culture?

The U.S currently leads the global market for 3D cell culture, and demand will be significant throughout the forecast period.

Q2. Which product holds significant share in the market?

Demand for scaffold-based 3D cell culture is expected to remain high in the near future, especially due to higher adaption in North America for research.

Cancer research has gained most benefits from 3D culture, which improves the understanding of cancer biology.

Q4. Which are the leading companies offering 3D cell culture?

Some of the leading companies offering 3D cell culture are Thermo Fisher Scientific Inc, Merck KGaA, Lonza, and Corning Incorporated, among others.

Q5. Which are the challenges associated with 3D cell culture?

Challenges associated with 3D cell culture can be scaffold’s mechanical strength and degradation. Moreover, synthesizing scaffolds that possess adequate mechanical characteristics is one of the challenges encountered in tissue engineering.

Global peripherally inserted central catheters market is projected to register a CAGR of 5.8% during the forecast period 2016 – 2024 in terms of value & revenue.