Therefore, a rise in demand from the soap and detergent industry is projected to bolster the expansion of the liquid sodium silicate market size over the coming years.

?Steady Growth of major End-user Industries such as Adhesives and Construction to Boost Sales: Sodium silicate is an excellent bonding agent for sealing fiberboard boxes, as it has the ability to firmly hold together the flaps in less time. A wide range of advantages of liquid sodium silicates include suitable viscosity, good setting properties, high strength, easy wetting of the surfaces to be held together, and controlled penetration.

It is primarily used as an adhesive, due to its ability to change from a liquid state to a semi-solid state as required, without excess water consumption. Liquid sodium silicate used in the binders of cement and increases the cement’s heat and temperature resistance. It also increases the waterproofing ability of the cement. The liquid sodium silicate market will witness a rise in demand from adhesive and construction industries.

Decrease in Groundwater Reserves Increasing Sales in Water Treatment Industry: Liquid sodium silicate’s semi-solid colloidal solutions, which act as coagulants, can be used for treating waste and raw water. Liquid sodium silicate increases the rate of floc formation, as well as floc density, size and stability. It also has the ability to act as a coagulant at low temperatures, therefore acting as an efficient filter aid. Unlike other waste water treatments, liquid sodium silicate does not require phosphate or zinc.

It forms a microscopic film, on the inside of the waste water treatment pipe, which acts as a corrosion inhibitor that prevents the leaching of lead solders. High pH level of liquid sodium silicate is used as an advantage in water treatment systems. Added in proper amounts, it can raise the system’s pH to the alkaline range to lower lead levels in municipal water treatment facilities. It can also help contain high amounts of manganese or iron to eliminate red-water staining.

High PH of Liquid Sodium Silicate Can be hazardous to Human and Aquatic Life: The pH of liquid sodium silicates ranges from 11.2 to 12.7, which makes it irritable to mucous membranes, the skin, and eyes. If it comes in contact with the eyes, it can lead to pain, irritation, and conceal burns, which might also result in blindness.

The psychological effects of the contact of liquid sodium silicate on the eyes depends on the alkalinity of the silicate causing irritation due to chemical burns. Inhaling mists or the musty odour of it can lead to moderate effects such as cough, pain, and choking. Sodium silicate is not stable in aquatic systems, but is acutely toxic to aquatic life. It has exhibited low to medium toxicity to aquatic organisms and low toxicity to terrestrial organisms. 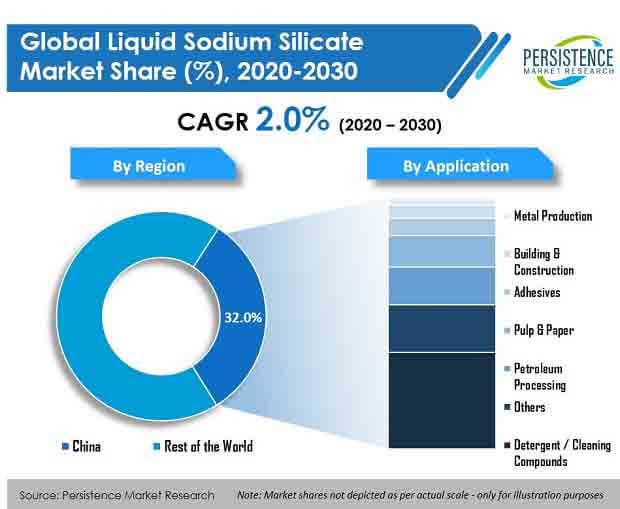 The COVID-19 pandemic has resulted in lockdowns, travel restrictions, and huge decreases in industrial activities across the world. As far as the global liquid sodium silicate market is concerned, it is projected to experience a sharp decline in all applications except detergents & cleaning compounds, in the year 2020-2021.

PMR’s study on the liquid sodium silicate market is divided into three significant segments - molar ratio, application, and region. This report offers comprehensive data and information about the important market dynamics and growth parameters related to these categories.

Glycine Market report provides detailed valuation on key market dynamics such as drivers, trends, opportunities, and restraints, along with detailed information about the glycine market structure..