As per Persistence Market Research’s latest industry analysis on the global IoT sensors market, global revenue is currently valued at around US$ 8 Bn, with nearly 29% Y-o-Y market growth experienced in 2021. Rise in demand for integration of Industrial IoT (IIoT) in industries that involve sensor-based measurements for analysis and decision support purposes is driving the growth of the IoT sensors market. IoT sensors account for nearly 20% share in the global IoT market.

IoT sensors are widely used in various applications from connected cars to traffic lights and smart homes. The interconnectivity between sensors and devices is why IoT systems have been witnessing growing demand with accelerating smart cities initiatives.

What is the Predicted Market Outlook for IoT Sensors?

The market for IoT sensors is expected to experience major growth opportunities over the forecast period of 2021 to 2031. With growing popularity of smart home solutions, there has been an increase in application areas such as home automation, smart parking, smart lighting, smart water management, traffic management, and home security & safety, among others. Automotive application is further driving market growth with increasing deployment of IoT sensors in connected cars and telematics.

What are the Key Expansion Strategies Followed by IoT Sensor Manufacturers?

Key IoT sensor companies operating in the market are delivering advanced, flexible, and cost-effective IoT sensor solutions and products proactively, and are providing solutions and services to help end users maneuver through the ever-changing requirements. Regional expansion and acquisition of semiconductor manufacturing companies are some of the strategies being opted for by key players to boost their sales of IoT sensors.

With growing popularity of IoT sensors, companies are catering to the customized demands of customers, aimed at meeting their frequently-changing industry-specific requirements.

Furthermore, companies are focusing on gross margin expansion, while at the same time, achieving significant revenue growth in the focused end-markets of automotive, healthcare, consumer electronics, and robotics, among others. 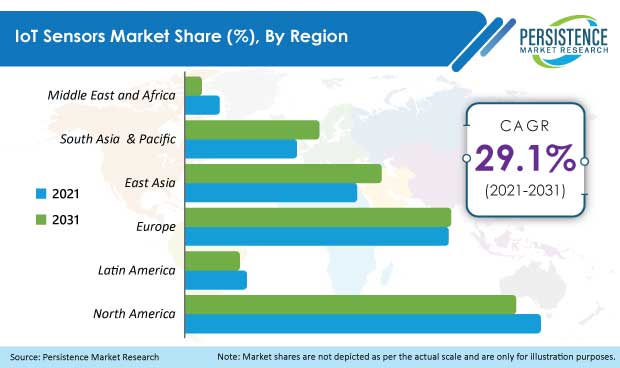 Why is Demand for IoT Sensors Surging across the U.S.?

According to Persistence Market Research analysis, overall IoT sensor spending in the U.S. alone is likely to increase at the rate of around 30% from 2021 to 2031, up from a market value of over US$ 1 Bn in 2020.

The U.S. will emerge as the largest market for IoT sensors in North America due to strong presence of solution vendors such as Honeywell and growing demand for smart and connected devices. Growth can be attributed to increasing demand for advanced IoT sensor solutions across different industry verticals. Besides, the U.S. is also anticipated to adopt new technologies at a faster pace as compared to other countries in the world.

Moreover, increasing penetration of the internet and growing smart city initiatives in North American cities happens to be one of the major factors driving market growth.

For instance, San Francisco is pioneered in smart parking systems that help drivers find parking among the 8,200 parking spots installed with sensors.

Moreover, Chicago has installed an array of sensors to record and respond to floods, traffic, or safety incidents.

Furthermore, New York, Boston, San Francisco, and Chicago are some of the major cities in the U.S. to establish predictive analytics, monitoring air quality in congested areas, and embedding sensor nodes into light poles for the urban environment.

Owing to such initiatives and advancements, the market for IoT sensors is booming in the North American region, especially the U.S.

Will the U.K. be a Lucrative Market for IoT Sensor Service Vendors?

The market in the U.K. is anticipated to surge at a CAGR of more than 29% over the forecast period. In recent years, the U.K. media landscape has been changing rapidly. Technological advancements are offering significant growth potential for implementation of IoT sensor solutions and services in the U.K.

The market in Europe for Internet of Things (IoT) sensors happens to be on the rise. With growing popularity of smart cities in the European countries such as Germany, the United Kingdom, France, Italy, and Spain, among others, there has been rise in the deployment of IoT sensors in the region.

Smart cities make use of IoT devices such as connected sensors, lights, and meters in order to collect and analyze data. The cities then use this data to improve infrastructure and provide better utilities to consumers.

Increasing demand for automation across different industry verticals is one of the major factors driving market growth. Various types of sensors are being developed and implemented across different industrial control processes. These sensors are increasingly being implemented in smart factories, ranging from basic temperature to humidity monitoring to pressure monitoring, among others.

What is Driving IoT Sensor Consumption in China?

The market for IoT sensors in China is likely to expand at a CAGR of around 33%, up from a market value of around US$ 1 Bn currently. China is creating potential growth opportunities for IoT sensor solution vendors and service providers owing to the rising robotics market and growing demand for smart vehicles and other smart devices.

Moreover, cost optimization and innovation happen to be major drivers for the growth of IoT sensor solutions and services in the country.

Furthermore, rise in demand for integration of IIoT in industries that involve sensor-based measurements for analysis and decision support purposes is boosting market growth of IoT sensors.

How are IoT Sensor Sales Faring across India?

The market in India is anticipated to expand at a significant CAGR of around 32% over the forecast period. Demand for IoT equipment and sensors has increased rapidly in major economies of South Asia and Pacific, including India and Australia & New Zealand, which has created key potential growth opportunities for market participants.

The pressure sensors segment is anticipated to be the most attractive, accounting for the highest incremental opportunity among other sensor types. Growth of the segment can be attributed to increasing concerns regarding safety, comfort levels, and reduction in automobile emissions.

Will the Wireless Connectivity Trend Drive Demand for IoT Sensors?

In terms of connectivity, the market is segmented into wired and wireless. The wireless connectivity type segment is expected to hold a higher share of the market, accounting for more than 50% in 2021, while expanding at a CAGR of around 20% over the forecast period.

Increase in adoption of mobile devices and the bring-your-own-device (BYOD) concept, along with IoT in enterprises is set to drive growth of the market for wireless network technology.

Growing demand for wireless data from mobile devices, connected cars, and smart grids, among others, is creating the need for a more robust internet connection. Furthermore, upcoming advanced technologies such as 5G mobile technology are expected to provide much faster internet connectivity and coverage, which is further expected to present major growth opportunities for wireless network technology, thereby driving the market for wireless IoT devices across the globe.

Why are IoT Sensors Gaining Popularity in Automotive Applications?

The automotive segment is expected to expand at the highest CAGR of around 34% over the next ten years. Growth of the segment can be attributed to increasing investments of automobile manufacturing companies in IoT sensors for the production of connected and autonomous driverless cars.

IoT sensor vendors and solution providers are also focusing on entering into partnerships with technology vendors and product manufacturers to target new innovations within the market. This strategy helps companies broaden their geographic reach with additional service portfolios.

What is the global market size for IoT sensors?

The global IoT sensors market is currently valued at around US$ 8 Bn.

At what rate did demand for IoT sensors increase in the last five years?

What are the key market trends shaping demand for IoT sensors?

Which countries are key producers of IoT sensor solutions?

What is the North America market growth outlook for sales of IoT sensors?

The market for IoT sensors in North America accounts for approximately 35% global market share, and this regional market is set to surge at a CAGR of around 28%.

Who are the top 5 IoT sensor vendors and what is their market share?

At what rate will demand for IoT sensors rise across Europe?

Which are the top five countries driving IoT sensor demand?

What are the market statistics for IoT sensors in Japan and South Korea?

Demand for IoT sensors in Japan and South Korea is expected to increase at CAGRs of around 31% and 29%, respectively, in the East Asia market.