Rising urbanization, growing demand for advanced technologies such as IoT & 5G, and government initiatives towards improving digital infrastructure are key factors driving the growth of the smart cities market. Development of smart cities is enabled, integrated, and powered by increasing penetration of digital technology.

Advancement of energy infrastructure is one of the key factors for any economic development. Some countries are facing threats in terms of reliability of grids and maintenance of their ageing energy infrastructures. Smart cities offer improved infrastructure for the optimal utilization of energy and enhance the energy efficiency by implementing smart energy grids and technologies. Thus, this increasing employment of smart grids is expected to propel the growth of the smart cities market. 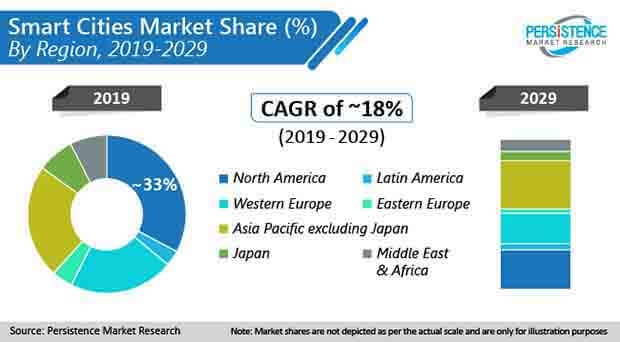 Hyper-connectivity is trending as it provides a form of active interaction between people and devices. The gradual evolution of Internet of Things allows billions of devices to connect and interact, thus having a positive impact in boosting the growth of the smart cities market. Furthermore, the advent of disruptive technology has been recognized as critical component in smart cities by governments. It helps in developing strategies as governments incorporate these technologies to solve metropolitan challenges such as rising power usage, safety, productivity, environment-friendly transportation, water distribution & management, and protection/security against crime & terrorism. Apart from this, rising adoption of technologies such as cloud, fog, and edge computing, Big Data Analytics, and AI (Artificial Intelligence) is also creating potential growth opportunities for the smart cities market.

Maintaining a relationship between public and private entities helps in reshaping how smart digital infrastructure will be developed, financed, and delivered in years to come. Increasing collaborations between public and private sectors with the goal of delivering smart cities specific services and infrastructure are key factors fueling the growth of the smart cities market. In recent years, collaborations help suggest and recommend wide range of technologies and solutions to notify vision or functionality of smart cities.

Apart from this, government organizations across the globe are taking various steps to initiate smart cities project and are partnering with major technology companies for implementing IoT across urban cities. These partnerships and collaborations with technology vendors for the development of IoT applications are generating potential growth opportunities for the smart cities market.

Cities in Asia Pacific Excluding Japan are characterized by large population and are witnessing rise in income levels and lifestyle changes. This results in mass migration to cities in APEJ and development of infrastructures and resources. Growing adoption of advanced technologies, powered by digitalization, is projected to surge the growth of the smart cities market.

Furthermore, several countries in APEJ, such as Singapore, China, India, and South Korea, are implementing smart city projects over the last few years. For instance, in 2017, there were approximately 500 cities at various stage of development in China with an estimated market value of US$ 95 Bn. Therefore, this implementation is considered as one of the major factors boosting the growth of the smart cities market.

The market overview provides growth scenario and market potential with maximum precision, which is adjudged with suitable assumptions. The report features unique and relevant factors that are expected to create a significant impact on the smart cities market during the forecast period. This report includes a detailed and considerable amount of information, which will help new solution providers in the most comprehensive manner for better understanding.

The research study on the smart cities market offers inclusive insights about the growth of the market in the most comprehensible manner for better understanding of users. Various insights offered in the report answer some salient questions that assist stakeholders in gauging all emerging possibilities in the market.

A unique and promising research methodology forms the base of the smart cities market. The report has been prepared after a comprehensive analysis of market happenings, and riveting insights have been compiled meticulously. The research methodology of the smart cities market has been a two-step process that comprises of primary and secondary research. Key stakeholders, which include smart cities solution & service providers and network service providers, experts of several designations, including executive vice presidents, directors, service engineers, technical advisors, GM marketing professionals, and sales professionals have been interviewed.