Castor oil and its derivatives are highly regarded in the pharmaceutical industry for their wound-healing abilities as it promotes healing and is also used as a tablet and capsule lubricant. Ricinoleic acid possesses anti-inflammatory and pain-reducing properties that help combat skin inflammation and aid in pain reduction.

Castor oil is a vegetable oil derived from castor seeds and has several medicinal, industrial, and pharmaceutical uses. Owing to its functional properties, it has been considered an ideal ingredient in several applications, which has led to an increase in the demand for castor oil & derivatives in recent years.

Players in the Indian market are focused on exports as there has been a significant increase in the demand for castor oil derivatives in North American and Asian countries such as the United States, Japan, South Korea, and China.

What are the Key Trends in the Indian Market for Castor Oil & Derivatives?

In recent decades, the castor oil market has seen favorable growth as both government and industry have shifted toward ecologically friendly methods, with an emphasis on finding renewable resources. The fluctuating prices of oil and fossil fuel supplies, combined with growing concerns about global warming, are driving the demand for renewable fuel sources, and this edible oil is being used as a feedstock for biodiesel.

There is high demand for alternate feedstocks due to increased worries about deforestation and GHG emissions. Castor seeds have a high oil content (50 percent) and they produce a high crop output of up to 140 gallons of castor oil per acre. This factor is expected to open up additional potential for biodiesel without putting food crops in danger.

With two growing cycles per year, the estimated CO2 absorption level of castor bean plants is 34.6 tons per hectare. When compared to petroleum diesel, the lifecycle analysis of biodiesel produced from castor revealed that greenhouse gas emissions were reduced by 90%. As a result, castor oil usage has been increasing steadily over the years and will continue to do so going ahead.

Plant oils are considered an alternative feedstock for the production of biofuels that can be used in diesel, as well as substitutes for petro-fuels in turbine engines. Biofuels have several advantages over conventional fuels. They are free from sulfur, which produces corrosive acids upon combustion, are free of aromatics, and are better lubricants for high-pressure injection system parts.

Biodiesel is also environment-friendly since it is biodegradable and eliminates lifecycle carbon dioxide emissions. The application of biofuels in transportation is also being extended to aviation. Automakers such as Fiat, Daimler, and Ford are utilizing castor oil derivatives to cut the petrochemical content of vehicles and improve the use of renewable resources. Furthermore, the utilization of biofuels in the automotive industry, although not very popular, has been gradually rising over the past few years.

Castor seeds can be found in almost every tropical and subtropical nation, either wild or cultivated. India is one of the leading producers of oilseeds such as castor. In terms of land and production, oilseed crops are second in importance to India's agricultural economy.

Gujarat produces the most castor oil and its derivatives in India, accounting for around 75% of the nation's total output, followed by Rajasthan and Andhra Pradesh. India has the ideal geographical and environmental conditions for the cultivation of castor seeds and contributes 0.15% of all vegetable oils produced worldwide.

One of the reasons farmers are growing castor seeds is that insects and illnesses do not attack these seeds and they also don’t need to take special care of the seeds while storing them. Even if growers store these seeds for three long years, oil production remains unchanged. Growers, however, never keep castor seeds in a warehouse for an extended period as it is a lucrative crop where companies instantly crush these seeds to make various castor oil derivatives.

Demand for bio-based products has increased over the years from sectors such as polymers, paints, personal care, pharmaceuticals, etc. The demand for bio-based products has increased from numerous end-use sectors for a variety of product applications due to growing environmental problems and government regulations. Castor oil is an environment-friendly, biodegradable, and readily available solution. Moreover, it is a source that provides opportunities for development in the field of polymers, such as polyurethanes, polyesters, polyamides, epoxy-polymers, and others.

Castor oil contains polyurethane, which has been used for medical purposes and has made a significant contribution to the healthcare system due to its efficiency and quality. Castor oil and its derivatives have gained recognition as sustainable sources of polyol. These derivatives are also gaining traction majorly due to their characteristics such as chemical and thermal resilience, lower degradation rate, and mechanical performance, which are similar to polyurethane, making them perfect alternatives to synthetic or chemical-based products.

Fluctuating prices of castor oil are creating a hindrance to the growth of the worldwide market. Small- and medium-sized buyers are particularly impacted by this volatility and won’t be able to compete with major players.

The value chain of the market for castor oil derivatives could be disrupted by any change in trade regulations or interruption in crop production in India as it is one of the biggest castor-producing countries. Castor oil and its derivatives are weak participants on the price front due to several problems, including excessive reliance on the weather, lack of suitable infrastructure, etc.

Indian farmers are also becoming more and more prone to price changes, and when prices are low, they migrate to more lucrative crops such as pulses and other oil seeds. The cost of unconventional renewable chemicals will also have a detrimental effect on the expansion of the market internationally. 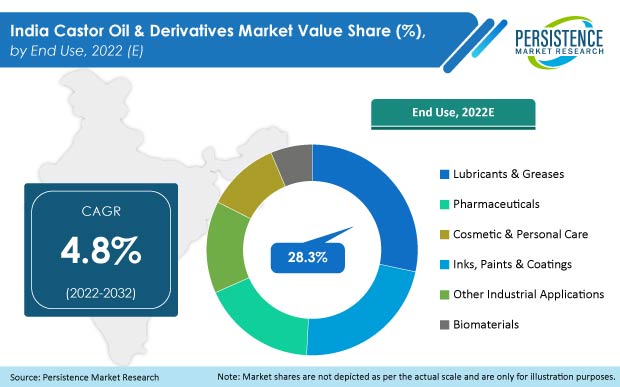 Which End Use of Castor Oil & Derivatives Generates Highest Revenue?

Based on end use, the market for castor oil & derivatives in India is prominently dependent on the lubricants & grease industry as they can be used for high-temperature lubrication and have better low-temperature viscosity. These products are also used to lubricate race car engines, jets, and diesel.

The market volume share of lubricants & greases in the castor oil & derivatives industry is around 28%, which is projected to reach 27,392 tons by the end of 2032.

Which Product Type of Castor Oil & Derivatives is Most Widely Utilized?

Based on product type, castor oil holds a major value share of 77.2% in the Indian market as castor oil contains antioxidant and anti-inflammatory properties that have been used for medicinal and therapeutic benefits in pharmaceuticals and are also widely applicable in various industries such as cosmetics, biomaterials, and others.

Leading producers of castor oil and derivatives are concentrating on processing the product while collaborating with other market players to boost production & revenue and increase their brand recognition. Working together with other companies enables businesses to integrate technology and develop a stronger worldwide brand.

What is the value of the India castor oil & derivatives market?

The Indian market for castor oil & derivatives is currently valued at US$ 112.2 Mn.

At what rate did the castor oil & derivatives market expand in India over the past years?

What is the forecasted value for the Indian market for 2032?

What is the demand outlook for castor oil & derivatives?

The Indian market is estimated to create an incremental opportunity of US$ 66.3 Mn between 2022 and 2032.

What is the sales forecast for castor oil & derivatives?

What are the key trends in the Indian market for castor oil?

Robust demand dynamics in the cosmetics & personal care industry, utilization of castor oil derivatives as a feedstock for biofuels, growth of pharmaceutical and healthcare sectors, and corporate aspirations for lower carbon footprint are key trends in this market space.

Who are the leading companies in the Indian market for castor oil & derivatives?