Developing regional markets, such as APAC and Europe, are projected to witness a steady growth in the cutting tool market spurred by rapid economic development. These regions are estimated to hold a prominent share in the cutting tool inserts market over the forecast period. Moreover, the North American region has substantially gained noteworthy market share of ~20% in 2018.

Increase in the demand for advanced technologies in the field of aerospace has given wings to the cutting tool inserts market. With rising competition in the field of aerospace and marine, the requirement of jet engines, turbines motor, transmission parts and other vital components of aircraft or submarine has significantly increased the need for machining these components thereby increasing the scope for cutting tool inserts market. 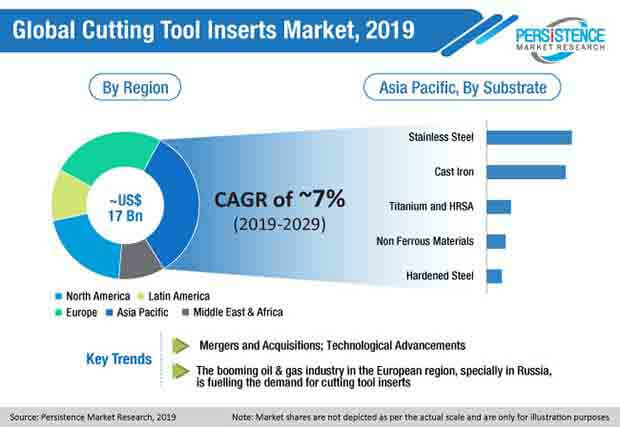 With the rise in the operations of metal cutting industry in the growing economies of APAC region, the scope for better sales of cutting tool inserts has increased. Metal cutting industries contribute to various end use sectors such as automotive, construction, railway etc.

The development of new manufacturing centers, in Asia Pacific is one of the prominent drivers of the market. The rising demand in the region is led by a healthy increase in manufacturing and industrial output in countries such as China & India. China, particularly, is expected to showcase a strong market growth owing to the country’s growing investments in cutting tools and its swift expansion of manufacturing base.

Furthermore, in developing regions such as Bangladesh and Philippines, the infrastructure growth scenario, regulations and policies, and the steps taken to promote businesses, particularly in the manufacturing sector, is likely to have a favorable effect on the cutting tool inserts market proposing huge investment opportunities in the near future.

The automotive industry is rapidly expanding along with substantial growth in infrastructure-related industries including railways, energy, and road construction in countries such as India, Indonesia, Thailand, and Vietnam. The cutting tool inserts global market’s application segment consists of Threading as the dominant player in this sector. The other applications are milling & shearing, parting & grooving and drilling & boring.

The third most preferred application segment is parting & grooving which is expected to go hand in hand with drilling and boring application segment. This is estimated to fuel the market growth owing to its various applications in the manufacture of engines, gears, transmission components, bearings, brake rotors, and other components. Based on these factors, it is estimated that the market for cutting tool inserts is likely to grow at a remarkable pace in developing countries. As a result, the companies are opening new centers to strengthen its customer support base in the market which is anticipated to show continued high growth.

The Asia Pacific market is emerging as a center for services and industrial production, thus providing a robust network for industrial exports globally, especially in electrical and technological goods. As a result, Asia Pacific has now become an attractive market for foreign investments, as most of the firms seek to benefit from available technical skills and comparatively low labor costs.

Yet, there is an increasing shortage of skilled labor due to the economic transition to services and economies which are highly industrialized. This may curb the economic growth owing to deterring foreign investments and reduced labor productivity. However, the impact will remain low as investments in education sector will offset the skilled labor shortage.

These companies are strategically focusing on creating flexible structure by reorganizing workforce and increasing sales through distribution sales channels to increase profitability.

Moreover, growth in the aftermarket business by the global roll-out of customer service centers, improved customer offerings, such as new e-solutions, and increased productivity through data-driven predictive maintenance will also remain key focus areas for the companies. The emerging players are focusing on launching new products and expansion of production capacities in order to enter into the market.

PMR’s study on the cutting tool inserts market is divided into three significant segments, such as delivery form, application and region. This report offers comprehensive data and information about the important market dynamics and growth parameters related to these categories.

The automobile sector will witness moderate growth in the coming years, which is anticipated to be the key driving factor for the growth of the global waterjet cutting machine market..