Historically, from 2016 to 2020, sales of bicycle tires increased at around 4.8% CAGR, wherein, developed countries such as the U.S., Canada, Germany, and the U.K. held significant share of the global market.

Expansion is due to a growing bicycle fleet as a result of skyrocketing fuel prices, which has prompted vehicle owners to look for alternative modes of transportation. Increasing popularity of cycling competitions has also broadened the reach of after market tires sales. In the electric bicycle market as well there are numerous opportunities expected.

Over the coming years, demand for sports bicycles will rise due to increased use of bicycles in trekking and leisure activities, as well as an increase in the number of cycling events. In recent years, the number of biking expeditions to difficult terrains such as steep mountain ranges has increased. Growing popularity of such expeditions is anticipated to drive demand for bicycles, which, in turn, is expected to benefits sales of bicycle tires.

The current COVID-19 pandemic crisis has had a major impact on economies across the world, resulting in national lockdowns, social distancing, and postponement of numerous automotive projects and plans. Disturbance in supply chains and drop in demand from bicycle tires have slowed market growth prospects. With initiatives taken by governments of various countries to boost economic growth, the market is expected to get back to its original growth rate in the near future.

To extend their business presence in other parts of the world, key market players are partnering with other market participants. In order to supply their goods and boost sales, players are also working on long-term deals with automotive companies.

What are the Roadblocks for Bicycle Tire Suppliers?

While manufacturing bicycle tires, a high amount of CO2 is emitted, causing pollution. Due to this, governments have placed stringent environment regulations on the manufacturing of tires. Pollution during rubber processing is further exacerbated by the use of toxic solvents and other compounds in tire production, which cause hazardous emissions.

Cycling is seen as the greenest form of transport, but waste produced from bicycle tires causes some amount of environmental degradation. Inner tubes and tires are generally made of butyl rubber, a synthetic material that doesn’t biodegrade. Hence, adverse environmental impact of tires production is likely to hamper growth prospects to some extent over the coming years.

What are the Key Opportunities for Bicycle Tire Manufacturers?

According to Persistence Market Research, bicycle tires that are both, cost-effective and high-performing are the most sought-after. Customers are also likely to seek mature, long-lasting, and cost-effective tires.

Costs will be minimized, product offerings will be extended, and long-term supply partnerships with manufacturing firms and distribution channel stakeholders will be built in order to achieve a competitive advantage in the market.

E-bikes like Pedelecs are expected to gain a lot of traction over the coming years, thanks to the growth of low-cost e-bikes across Asia Pacific. 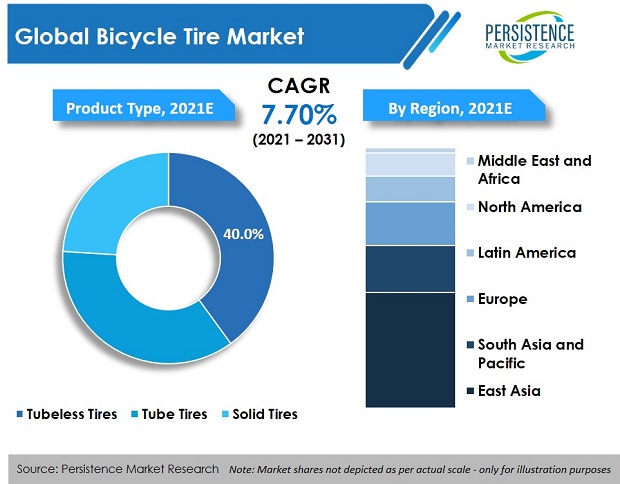 How is Focus on Safety Influencing Bicycle Tire Demand?

Although bicycle adoption has been a positive trend in many countries, concerns about repeated crashes and collisions have taken centre stage in recent years. Between 2001 and 2011, the National Safety Council recorded a 9% rise in cycling incidents. A majority of these collisions are caused by vehicle driver carelessness, with 18% of them failing to see the cyclist and 22% cyclists smashing into open doors.

What is the Regulatory Impact on Global Sales of Bicycle Tires?

Bicycles are gaining significant support from various government agencies in many cities as an environmentally friendly and healthy mode of transportation. Over the forecast period of 2021 to 2031, these factors are expected to support demand for bicycle tires.

Government laws and regulations that enforce the provision of incentives for the adoption of e-bikes are in place in European countries such as Germany, Denmark, and the Netherlands.

Which Region Offers the Largest Opportunity for Sales of Bicycle Tires?

With an absolute dollar opportunity of around US$ 2.7 Bn, East Asia is expected to be the most lucrative market for bicycle tire suppliers. China is projected to have 90% of the market share of the East Asia region.

China’s production of bikes in May also increased significantly from a year earlier, as consumers seek alternatives to public transport. China boasts the world’s largest production, and is also the leading bicycle and e-bike manufacturer. The population of China has been entitled ‘the kingdom of bicycles’.

Where Does the U.S. Stand in the Market for Bicycle Tires?

The U.S. holds around 6% of the global share of the bicycle tire industry. Bicycle imports into the U.S. have been steadily increasing, but the industry still has a lot to recover from a slow beginning to the year and increasing retail demand for bicycles during the COVID-19 pandemic.

What Is the Outlook for Bicycle Tire Manufacturers in China?

China has a share of almost 90% in the market for bicycle tire in East Asia. China’s production of bikes in May also increased significantly from a year earlier, as consumers seek alternatives to public transport.

China boasts the world’s largest production and is known at ‘the kingdom of bicycles’. China remains one of the top global producers of bicycles as well as bicycle tires. Bicycle-sharing companies in China are rapidly expanding their operations in countries such as India and Australia.

Why is Germany a Lucrative Market for Bicycle Tire Manufacturers?

With prospects in road and regular bicycles, MTB and racing bicycles, children's bicycles, and e-bikes, Germany's cycling industry appears to have a promising future, with the country holding 11% market share in Europe.

People's growing health consciousness, advances in bicycle tires, environmental concerns, increasing traffic congestion, and government schemes to promote cycling are all major growth drivers for this industry. Increasing use of folding electric bicycles and growing demand for bicycles with improved safety features and appearance are two emerging developments that have a direct effect on the dynamics of the bicycle industry.

Why Will Belgium Outpace Other European Markets for Bicycle Tires?

Because of the high demand for bicycles in Belgium with the country contributing to 2% of sales worldwide, both, local and international manufacturers have been able to introduce revolutionary bicycles with cutting-edge tires.

E-bikes, in particular, dominate the industry, owing to the segment's increased innovation. In Belgium, e-bikes are becoming more common for commuting. As a result, the government has taken steps to increase e-bike purchases, as they make travelling both, quicker and safer.

What Makes Japan a Promising Market for Bicycle Tires in East Asia?

Due to rise in cycling events and favorable government and employer initiatives, the market in Japan is expected to expand while having a market share of 8% in East Asia. E-bikes have gained immense popularity in Japan. Health benefits, traffic congestion avoidance, environmental benefits, and rise in demand for e-bikes as sports equipment are some of the key reasons considered in Japan for adopting and driving e-bikes.

Japan has a range of bicycles with advanced features through both, offline and online retail stores. The Japanese bicycle market is highly fragmented, with many foreign and local players operating in the country. Key players such as Merida Industry Co. Ltd and Giant Manufacturing Co. Ltd dominate the landscape.

Why is There High Demand for Tires in Electric Bicycles?

In Europe and Asia, there are now specialist e-bike dealers. Consumer test days are also held as well as other marketing campaigns aimed at promoting electric bicycles.

Latin American entrepreneurs, such as those in Mexico, are investing in the country's electric bicycle industry. Low labor costs and favorable business conditions are projected to attract a significant number of manufacturers over the coming years.

Why are Sales of Tubeless Bicycle Tires Surging?

Tubeless tires are projected to become a major revenue generator in the next half-decade, accounting for 43% share of the market. The fact that these have a low depreciation rate is the main reason for increased adoption by bicycle manufacturers. This also helps in the prevention of mishaps.

Tube tires, on the other hand, are not expected to lose favor because of their superior grip on the road. Tube tires have a high level of robustness and stability when riding due to the presence of durable, yet elastic rubber, allowing them to be used for a longer time.

Technological advances and provision of government subsidiaries are acting as catalysts for the bicycle industry's development in many areas. Increased revenues and government support would benefit the creation and selling of green modes of transportation at reasonable prices. Long-term contracts with end users will include revenue stability as well as opportunities for expansion.

Electric bicycles are becoming more common in the current climate, as the focus on electric mobility grows. Bicycle tires come in a variety of sizes and styles. Bicycle product manufacturers, on the other hand, are well aware of the issue of relatively large investments for a relatively small market. As a result, alliances or co-creation could be a viable option.

Recent developments related to companies manufacturing bicycle tires have been tracked by the team at Persistence Market Research, which are available in the full report.

Global GSE tires market is expected to witness steady growth at a CAGR of 4.8% during the forecast period 2018-2028, according to a PMR study. Positive growth prospects of the GSE tires market are mainly attributed to shifting preference towards air travel and growing focus on improving the overall experience of customers..