Rider safety and protection have emerged to be of paramount importance due to the growing bicycle sporting culture, continuous upsurge in bicycle fleet and rising demand for sports and mountain bicycles. Bicycle lights are expected to emerge as important products in the bicycle accessory market.

Moreover, bicycle lights have been perceiving a surge in demand more recently, owing to growth in the bicycle industry and easy availability of products. Increase in bicycle racing events and bicycle riding organizations has unfolded new opportunities for the growth of the bicycle lights market.

A bicycle light is a bicycle accessories used to ensure the comfort and safety of the rider at night. Bicycle lights and reflectors are necessary installations for a rider to cycle on a public road after dark.

Bicycle lights include front lamps, rear lamps, flashing lights, rear reflectors, pedal reflectors, etc. The market for bicycle light can be segmented on the basis of the following criteria:

Modern lifestyle and busy schedules force people to work without exercise and merely intake junk food, which in turn results in obesity or overweight. According to the World Health Organization, in 2014, over half of the adult population in 114 nations including Europe, Middle East, and the Americas was obese.

Meanwhile, a healthy and more nature-friendly lifestyle is gaining attraction and people are becoming more aware about the hazards caused by obesity across the globe.

Moreover, studies reveal that bicycling burns 500 – 700 calories per hour. Most of these countries have adopted bicycle riding as an effective way for burning fat and maintaining normal body mass. Thus, rising awareness among consumers increases the demand for bicycles, which fuels the growth of the bicycle accessories market over the forecast period.

Cyclist have to install bicycle lights to ride bicycle on a public road when dark and this necessity will surge the demand for bicycle lights over the forecast period and create an avenue for market growth.

Online Sales Channel to emerge as a Major Trend

The demand for bicycle accessories is projected to be grow significantly during the forecast period. The ever growing bicycle industry both in developing and developed economies is the prime reason behind the growth of this market. Moreover, the increasing number of bicycle racing events is also expected to surge the demand for bicycle accessories (bicycle lights) over the forecast period. The growing trend of online sales channel is further expected to supplement market growth.

A major trend expected five years down the line involves market leaders, both OEMs & dedicated manufacturers, focusing on providing bicycle lights through the online sale channel and using it to market its products in the regional market. Manufacturers are offering products as per consumer needs, which in turn is escalating competition.

Manufacturers are hopeful that local administrations will implement concrete policies to make global cities bicycle-friendly and create supportive infrastructure in urban areas. Cycle tourism is acting as a catalyst in the promotion of the bicycle industry. There has been global increase in the construction of the cycle tourism project in various countries to generate a good source of revenue for the country.

For instance, in Germany and France, the average annual turnover from the cycling tourism is approximately 11 billion Euros and the revenue is expected to increase in the near future due to increased infrastructural and extension activities going on in the cycling tracks and lanes. Thus, tourism activities creates significant opportunity for global bicycle light market.

Governments in advanced and emerging economies, such as the U.S., the U.K., Brazil, Singapore and India, have introduced regulations, policies and initiatives to promote the reduction of CO2 emissions. For instance, many countries in Europe and APAC are forcing consumers to use ecofriendly/green means of transportation, such as bicycles, for their day-to-day commute. Also, most European countries and some U.S. states require bicycle lights at night for safety purpose.

China is expected to remain dominant in terms of sales and demand for bicycle lights, owing to the increasing sales of bicycles. Europe is also expected to witness a high penetration rate, owing to the rising bicycle fleet in the region.

North America is expected to grow with a significant CAGR during the forecast period, owing to increasing tourism activities and the several government norms regarding cycling on pubic roads after dark without light in the region. The Middle East & Africa region is anticipated to grow at a significant pace during the forecast period, owing to the high demand for bicycle lights from bicycle users. 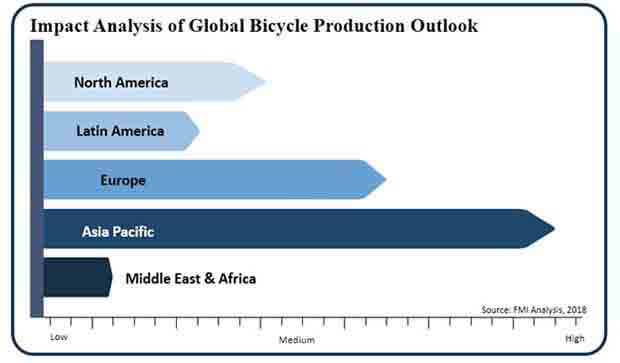 Key players in the global bicycle light market are:

The pollution caused due to the emission from fuel-driven vehicles has increased to a never-before high level in the recent past; this has been capitalized as an opportunity for green solution providers and manufacturers. Bicycle manufacturers and accessories providers can exploit these conditions as an opportunity to expand and increase their business. Eco-friendly modes of transport, such as bicycles, have already gained popularity in European countries such as Denmark, the Netherlands, and London

PMR will follow a triangulation methodology to estimate data covered in this report. A detailed market understanding and assessment of the nature, mounting type, bicycle type and sales channel of the product segments covered in the study are followed by a demand-side analysis to estimate the sales of target product segments, which is then cross-referenced with a supply-side assessment of value generated over a pre-defined period. The statistics and data are collected at a regional level and consolidated and synthesized at a global level to estimate the overall market sizes.