Myriad of trends related to consumer sentiments and technological disruptions will forge ahead the expansion of the bicycle brake components market size. Rapidly developing bicycle infrastructure, revised law and enforcement practices to better protect people cycling, and the need to suppress rising traffic congestion are expected to augment the bicycle industry, thereby augmenting the growth of its sub-components such as bicycle brake components.

Promotion of e-Mobility in Developed Countries to Augment Market Growth: Since the invention of e-bikes, aggressive promotion and marketing activities have made the market ready for the electric future. Demand for e-bikes is increasing on the onset of rising pollution levels, increased fuel prices, and need for safer transport. Developed regions such as Europe, especially the Netherlands, have seen a comparatively higher growth rate in e-bikes as compared to other countries, owing to strict government regulations in place. Also, governments in countries of Europe, Asia, North America, and Australia are offering subsidies for using e-bikes. Catering to this demand, OEM bicycle brake component manufacturers have already started investing in the development of brake technologies. Additionally, they are actively engaged in the design and development of braking systems that specifically cater to the e-bike sector, in turn, driving the global bicycle brake components market.

Regular Replacement Rate of Bicycle Brake Components: The average lifespan of bicycle brake components depends on a variety of parameters, including the selection of material, metallurgy riding conditions, and weather and type of terrain. Yet, most of these components require replacement after a fixed period of time. Average rate of replacement of bicycle brake pads is when the cycle has been used for around 400-2,000 miles, whichever distance wears out the brake pad faster. Similarly, disc rotors are replaced when they severely wear out, which can be noticed through pedal vibrations. All these factors lead to new sales in the bicycle brake components market.

Providing Bicycle Brake Components as Integrated Units: OEM bicycle brake component manufacturers are focusing on providing brake components designed and produced as a single set. These optimized components offer maximum performance for higher requirement bikes. Manufacturers integrate brake levers with derailleur units, the brake pads with calipers, and brake rotors and the main brake into one unit. Companies such as Shimano, Magura, and SRAM have a line of such products for different bicycle brake configurations. As a result, the advantage derived is added stability and reduced weight. 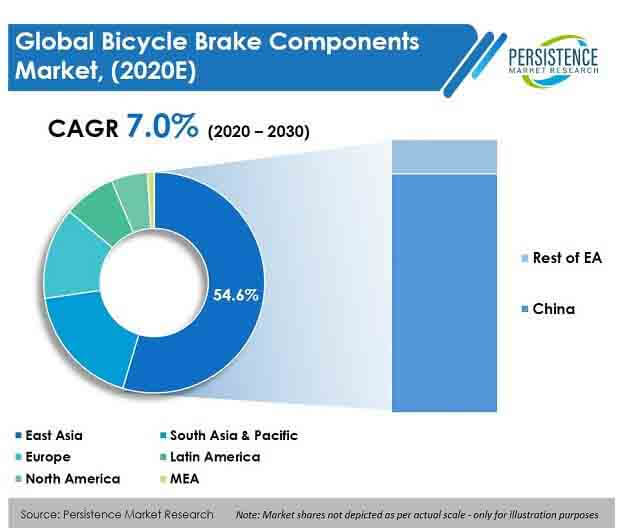 OEMs of bicycle brake components, having manufacturing and factory outlets in the European region, are aggressively establishing sales offices in East Asia. Countries such as, China, Japan, and Taiwan have seen a large number of foreign expansions in the past few years. This trend is due to increasing population and availability of niche resources. Countries such as Taiwan and Japan are at the forefront of bicycle manufacturing. Hence, they attract a large number of allied industries from their domestic regions. Thus, manufacturers choose to operate such facilities out of Europe, and especially in these growing market, which leads to East Asia having the largest bicycle brake components market share.

Over the past few years, bicycle manufacturers have set up independent production and manufacturing facilities for bicycle components, including braking systems. They are aiming to become one-stop suppliers for all parts of a bicycle to end users, so that they retain their market position in the bicycle brake components market. This has given rise to a lot of competition related to products, regional expansions, and the provision of different services. These factors provide an opportunity for the bicycle brake components market to grow steadily in the future.

The bicycle brake components market is projected to be highly fragmented in nature, with a handful of tier-1 players occupying around one-fifth share in the global market. Some of the active and leading participants in the global bicycle brake components market include Campagnolo S.r.l., Clarks Cycle Systems Ltd., Industrias Galfer S.A., Shimano Inc., SRAM LLC, Tektro Technology Corporation, Hope Technology (IPCO) Ltd., and Rex Articoli Tecnici SA, amongst others.

The global COVID-19 outbreak has proven disastrous for almost all countries and sectors. With movement restrictions, trade suspensions, and social distancing measures in place, a lot of industries have been adversely affected. However, sales of bicycles have the potential to increase, as more people are preferring rising a bicycle over public transport, as a safety measure. Also, cycling to remain healthy is a growing trend during these times. As such, the COVID-19 pandemic is not expected to have a noteworthy impact on the bicycle brake components market space.

The growth of the bicycle brake components market is primarily driven by increased adoption of bicycles for recreational events and hiking activities. The industry has witnessed a sizable surge over the past couple of years, and the procurement rate is expected to remain healthy throughout the projected period.

Key indicators of market background, such as value chain analysis and supply chain, compounded annual growth rate (CAGR), and year-on-year (Y-o-Y) growth of the market are explained in PMR’s study in a comprehensive manner. This information can help readers understand the quantitative development projections of the bicycle brake components market over the forecast period.

The study is relevant for stakeholders in the bicycle brake components market, as well as manufacturers, distributors, suppliers, and investors, as it can help them understand applicable strategies to grow in the market. Stakeholders, investors, industry experts, researchers, and journalists, as well as business researchers in the bicycle brake components market can leverage the information and statistics presented in PMR’s research report.