Mountain bikes, road bikes and e-bikes, together, currently account for more than 60% share in the sales of bicycles around the globe.

From 2013 to 2021, global bicycle sales increased at 4% CAGR, which saw a huge increase in sales around the world in 2020 during the pandemic. China, Germany, the U.K., U.S., Brazil, and India accounted for a large share of global demand for bicycles.

Surge in oil prices and need to conserve natural resources are expected to drive the market for bicycles. More people around the world are choosing to pedal shorter distances to save on oil and fuel.

Cycling contributes to the preservation of resources that are used to power other types of transportation. Furthermore, riding a bicycle does not require a license, making it a healthy, inexpensive, and accessible mode of transportation for everybody.

Heavy traffic congestions and increasing urbanization will also boost sales of bicycles. According TomTom traffic index, in Europe, traffic congestion has increased by only 2%, but traffic in North America has climbed by 17%. The reason for this is many Europeans have begun to see bicycles as a viable mode of transportation, resulting in significant reduction in traffic congestion.

The European Government has also pledged full support for the use of bicycles. The electric bicycle sector is also benefitting immensely from such initiatives.

Over the next ten years, bicycle consumption is set to increase steadily at a CAGR 5.8%.

What are the Key Opportunities for Bicycle Manufacturers?

Continuously increasing demand for faster and cleaner modes of transportation will create new opportunities for bicycle manufacturers. Pollution created by emissions from gasoline-powered automobiles has reached new heights. In the meantime, green solution suppliers and manufacturers have seen this as an opportunity. Bicycle manufacturing companies can take advantage of these circumstances to expand and grow their business.

Environmentally friendly means of transportation using bicycles as a mode of transportation have already gained traction and is a popular trend in European countries such as Denmark, the Netherlands, and the U.K. Governments in Europe and the United States have promoted the use of bicycles in cities where schools, workplaces, retail centers, and other amenities are closer to residential areas.

What are the Restraints That Bicycle Suppliers Encounter?

Lack of dedicated cycling tracks is one of the biggest restraints for bicycle demand. Well-connected road network across nations is critical to the global bicycle market's performance over the projection period. This has been a major problem, as governments and manufacturers continue to struggle to develop bike tracks and create good riding networks.

Developing economies are working on establishing a bicycle-friendly environment with appropriate and safe cycling tracks to ensure customer safety and avoid accidents and injuries. Authorities build comparatively few dedicated cycling paths in nations with bigger populations, such as India, Indonesia, and Brazil.

Higher initial cost of electric cycles too is a big restraint for the sales of cycles. Majority of the middle-class population in Central America, the Caribbean, Africa, and Asia Pacific has a poor income. Furthermore, as compared to traditional bicycles, the cost of electric bicycles is relatively higher. 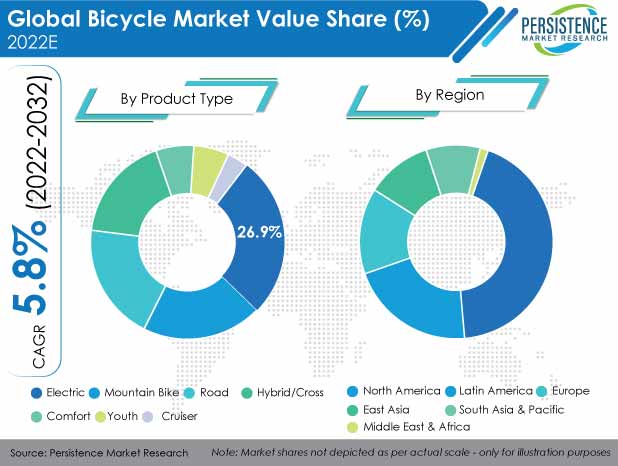 Where Does the U.S. Stand in the Global Bicycle Market?

“Adoption of E-bikes and Premium Bicycles High in the U.S.”

The U.S. held almost 90% of the North America bicycles market in 2021. The market predicted to be driven by an increase in the number of cycling events as well as favorable government and employer efforts. They promote cycling events such as road racing, touring, and leisure riding, as well as track racing, off-road racing, and mountain biking.

High adoption of e-bikes, smart bicycles, and premium bicycles is also propelling market growth. Environmental benefits, health benefits, traffic congestion avoidance, and growth in demand for e-bikes as sports equipment are some of the key factors considered for adopting and driving e-bikes across the U.S.

What is the Outlook for Bicycle Manufacturers in China?

China is one of the most profitable markets for manufacturers and suppliers of bicycles. This market is projected to gain an absolute incremental opportunity of more than US$ 14 Bn during the forecast period of 2022 to 2032.

No other country beats China in terms of production and sales when it comes to the dynamics of the bicycle industry, making it a secure sanctuary for cycle manufacturers looking to capitalize on this high-potential market.

Due to distributors realizing the potential of the market in such places, rural sections of the country have recently become a new hotspot for generating revenue for the bicycle industry. Traditional bicycles have taken a backseat in the country as the industry matures, with electric bicycles gaining prominence.

Why is Europe Considered a Lucrative Market for Manufacturers of Bicycles?

“Cycling Trend Most Popular across the European Continent”

Over the forecast period, Europe is expected to be one of the most prominent bicycle markets. According to this analysis, Germany is expected to account for nearly 22% of the European bicycle market share in 2022. Europe experienced what is called the ‘Great Bicycle Boom of 2020’ during the pandemic.

Bike sales are on the rise, thanks in part to the coronavirus outbreak. More people are choosing to ride their bikes to work to stay active after long lockdowns or to escape packed trains and buses. Environmental benefits of riding is leading to more bicycle lanes in cities across Europe, including Paris, Berlin, Lisbon, and Barcelona.

Which Bicycle Type Has the Most Potential for Growth across the World?

Electric bicycles, or e-bikes, have the highest potential for growth and will register an absolute incremental opportunity of more than US$ 20 Bn during the forecast period of 2022-2032. Electric cycles have emerged as a most convenient option for local commutes, which will drive the bicycle sector due to their numerous advantages.

Electric bicycles are set to be adopted more quickly in countries such as the Netherlands, Denmark, Germany, and China, where the number of cyclists is already relatively high. Electric bicycles, also referred as pedelecs, provide a faster commute than traditional bicycles, and they also require less human effort to ride, overcoming one of the major disadvantages of traditional cycles.

These factors are expected to increase the number of cyclists on the road who will use electric bicycles for their daily commute needs.

Which Technology is most Sought-After in Bicycles?

Conventional bicycles are predicted to account for more than 70% market share in 2022. Conventional cycles are relatively cheaper than electric bicycles, readily available, and easy to maintain. Low price point is the principal reason for the higher sales volume of this technology type of bicycle across the world.

Mid-range cycles are set to account for more than 43% market share in 2022, and are the most sought-after bicycles by price point. The cause for this is rising consumer awareness of bicycle safety, innovative features, and improved ride quality.

Another element that may contribute considerably to the rise of mid-range bicycles is an increase in income levels in major bicycle markets and a decrease in the price gap between low- and mid-range cycle versions.

The global market saw a substantial surge in bicycle sales as a result of the COVID-19 outbreak. As a result of rising public transportation anxiety and increased physical activity, an increasing number of people chose one of the most basic modes of transportation, resulting in the so-called 'Bike Boom'.

According to studies, the global cycling boom peaked in 2020, signifying a watershed point for the sector that will influence its future growth for years to come. Beginning Q2 2020, sales climbs at a rate never seen before in modern history. Demand occasionally outstripped supply, driving up prices, although cycle market growth could have been much higher if there had been more stock available.

Major bicycle firms are vying for a big market share in the global bicycle landscape, which is fiercely competitive. To drive income, major bicycle suppliers are focusing on marketing and sales activities to retain existing clients as well as gain new ones.

The bicycle market has witnessed a range of growth tactics employed by prominent competitors over the previous years, including acquisitions, mergers, and collaborations. Bicycle selling companies are investing in R&D and new products for the future of bicycles in order to enhance their revenue share.

Technological improvements and the creation of government subsidiaries have acted as spurs for the bicycle industry's expansion. Development and selling of inexpensive green modes of transportation has been aided by increased income and government support. Long-term agreements with end customers will ensure revenue stability while also allowing for market expansion.

What is the bicycle market size?

The global bicycle market is currently valued at more than US$ 62 Bn.

Is the bicycle industry growing?

What was the historical growth rate for the bicycle market from 2013 to 2021?

Which are the most lucrative bicycle markets?

China, the U.S. and India are lucrative markets for bicycle manufacturers, with East Asia projected to hold the highest market share of more than 43% in 2022.

Who are the top 5 manufacturers of bicycles?

How is the North America bicycle market shaping up?

The market for bicycles in North America is expected to increase at 3.6% CAGR through 2032.

Which technology is most prevalent in bicycles?

Conventional bicycles are the most sought- after across the world.

At what percentage is the bicycle market set to register growth in Germany?

The Germany bicycle market is projected to register growth at the rate of 6.7% through 2032.