Globally, the food & beverage (F & B) industry is witnessing phenomenal growth and is expected to continue to grow during the forecast period. This is mainly due to increasing population, changing dietary habits, growing per capita spending, technological advancements in F & B processing and growing shelf life of food products, among others.

Since the past couple of years, the consumption rate of wine has been surging globally and is expected to steadily grow further during the forecast period. During the production of wine, synthetic tartaric acid is used as an acidity regulator and helps to manage pH level of wine.

Production of wine to cater to the rising demand across the globe and demand for additives, such as flavor enhancers and acid regulators, among other additives, are expected to increase over the forecast period. Along with this, increasing demand for synthetic tartaric acid as an emulsifier in the bakery industry will also provide impetus to the growth of the market.

In drug formulations, synthetic tartaric acid is used as an excipient for the preparation of effervescent tablets, powder and granulates. Furthermore, efforts are being made by governments and regulatory agencies in developed nations, such as the U.S. and the U.K., to streamline the approval process for excipients, which is also expected to push the growth of the pharmaceutical excipients market, which in turn, is expected to drive the synthetic tartaric acid market during the forecast period.

Moreover, within the cement industry, especially in gypsum and plaster applications, synthetic tartaric acid used as used as a retardant to improve the handling of these products. Thus, increasing number of housing & infrastructure projects in developed and developing industries will help to drive the synthetic tartaric acid market. 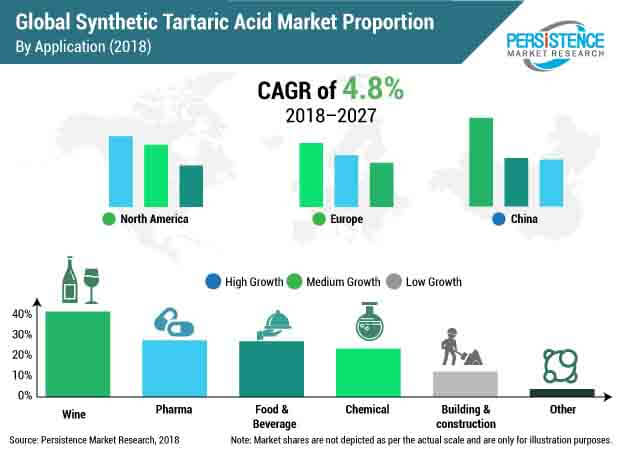