Various beneficial properties offered by synthetic ropes are their high strength, durability, light weight and corrosion resistance. Due to these distinguishing characteristics of synthetic ropes, they are mostly preferred over steel ropes. Synthetic ropes find numerous applications in various end-use industries, such as marine and fishing, oil and gas, construction, among others.

The global population is expected to reach 9 Bn by the end of 2050. With this significant growth in world’s population, concerns pertaining to food security and nutrition are becoming a vital issue in developing and developed regions. For the same, fisheries and aquaculture sectors are channelizing efforts to cater to the growing demand for food and related non-food products.

According to the Food and Agriculture Organization of the United Nations, the global fish production was around 171 Mn tons in 2016. Of this, around 88% share was used for direct or indirect human consumption, wherein 47% was accounted by aquaculture production and 53% came from capture production.

With this significant rise in consumption and demand for fish products, the fishing industry is expected to grow steadily over the forecast period. Synthetic fibers are an indispensable part of the fishing industry and are prominently used in fishing nets, twines and ropes.

Synthetic ropes are used in trawling applications as they offer several benefits, such as better abrasion resistance, high breaking strength, high strength to weight ratio and better grip and light weight, among others. Owing to these factors, the demand for synthetic ropes is expected to increase at a fast pace during the forecast period.

Moreover, the maritime transport sector has registered moderate growth since the economic downturn of 2008-09. The global shipping industry constituted over 85% of world trade, which includes trade of oil & gas, main bulks and dry cargo. According to UNCTAD, the global seaborne trade increased by 2.6% in 2016, in terms of volume, and is expected to grow at a CAGR of 3.2% over the period 2017-2022.

With the growth in seaborne trade and increasing size of cargo, the demand for high performance, lightweight, cost-effective and safer ropes is increasing for mooring lines, tow line and lifting operations. Thus, the significant growth of the shipping industry and seaborne trade will in turn help to drive the demand for synthetic ropes over the forecast period. 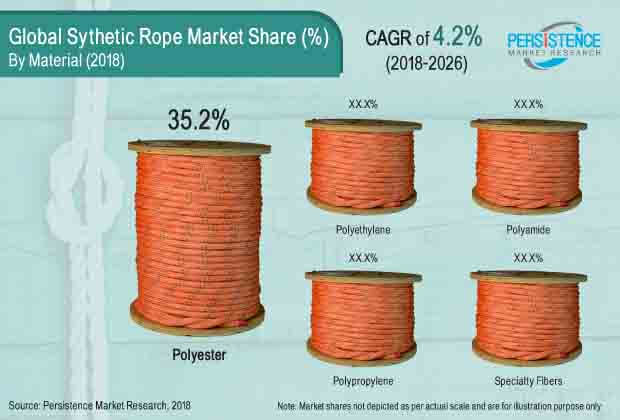 Synthetic ropes manufacturers have been channelizing efforts towards strengthening their production capacity volumes and are focusing on specific regions to cater to regional markets. This is expected to positively impact the synthetic rope market in near future.

Global ready-mix concrete market is expected to grow and reach more than 3,500 Mn cubic meters by the end of 2029..

Global Construction Aggregates Market in forecast period of 2015-2021 end is expected to grow at a healthy revenue valuation and CAGR. More details inside.