The global market for smart grid sensors expanded at the rate of 11% over 2017-2021. Smart grid sensor demand has grown due to integration of Internet of Thing (IoT) technology across smart grids and smart energy infrastructure development.

These sensors are used across various smart grid applications such as smart energy meters, Supervisory Control and Data Acquisition (SCADA), Advanced Metering Infrastructure (AMI), and others, which is driving overall demand for smart grid sensor systems.

What are the Key Factors Driving Smart Grid Sensor Sales? 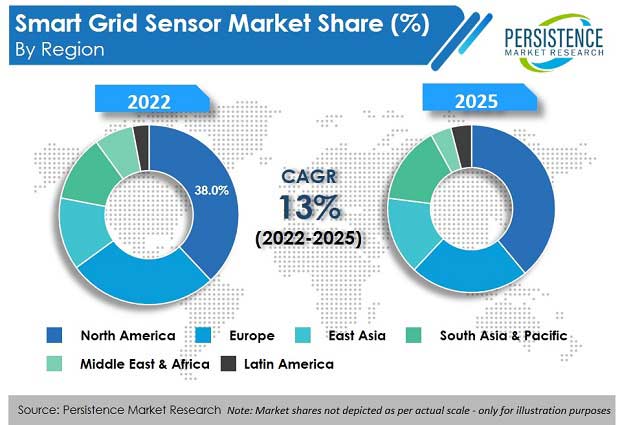 How Will Sales of Smart Grid Sensors Shape Up in the U.S.?

“SGIG Program to Drive Need for Smart Sensors in Grids”

Currently, the U.S. is anticipated to constitute largest market share in the North America smart grid sensor market, with the market expected to grow at the rate over 11% through 2025.

The U.S. market is proliferating owing to government initiatives toward smart cities and the presence of smart infrastructure in the country.

The Smart Grid Investment Grant (SGIG) program helps accelerate the upgradation of electric distribution and transmission systems in the U.S.

Such developments are set to drive demand for smart grid technologies in the country.

Why is India a Prominent Market for Smart Grid Sensor Suppliers?

The India smart grid sensor market accounts for large consumption in the APAC region, and the market size is expected expand 1.5X over the forecasted period. India’s market is expected to surge at a high CAGR of nearly 17%, owing to factors such smart city project development and strict regulations by the government for the energy sector.

For instance, in October 2021, the National Smart Grid Mission by the Ministry of Power, Government of India (MPGI), developed a smart grid awareness film named “Smart Grid and its Transformative Impact on Utility Operations and Customer Energy Empowerment”, to make citizens aware about energy consumption.

Such initiatives taken by the Indian government will fuel demand for smart grid sensor platforms in the country.

Which Country is Driving Growth of the Europe Smart Grid Sensor Market?

“Demand for Smart Sensors in Smart Grids Surging in the U.K.”

The U.K. market for smart sensors in smart grids is set to register the highest growth in Europe and the market size expected to surge by nearly 16% CAGR during 2022-2025.

Thus, government support to private operators for low carbon emission is anticipated to drive demand for sensors used in smart grids in the U.K.

Which Smart Grid Sensor Type is Leading Market Expansion across the World?

By product type, voltage/temperature sensors will dominate the market, and the segment is set to expand at a high CAGR around nearly 17% during 2022-2025.

Which Application is Exhibiting High Demand for Smart Grid Sensors?

Private grid operators will dominate smart grid sensor demand, and the segment is expected to expand at a high CAGR around 18% through 2025.

As per Electricrate data, maximum electricity is supplied by private operators in the U.S. across 7 million miles each year through transmission and distribution lines. The U.S. is one of the prominent countries in terms of development of smart grid technology.

Overall, rising adoption of advanced technology in smart grids is anticipated to drive demand for smart grid sensor services across the globe.

The COVID-19 pandemic has had a significant impact on nearly all spheres on the global economy. The pandemic drove most of the affected nations into shutdowns, restricting their commercial and industrial activities.

The global energy & power industry is one of the industries that suffered disruptions owing to travel bans, factory shutdowns, border lockdowns, and trade bans.

In addition, the supply chain and production were not fully reopened due to COVID-19 restrictions, which affected energy & power demand. As many countries have restarted their supply chains and travelling & transport industries, the market for smart sensors in smart grids is set to witness significant growth over the coming years.

Key smart grid sensor providers are inclined at investing heavily in product innovation, research, and development in energy and smart infrastructure. With the use of technology, market players are also focusing on ensuring safety, quality, and customer satisfaction for capturing an increased customer base.

How much is the global smart grid sensor platform market valued at?

What is majorly driving demand for smart grid sensors?

At what CAGR did smart grid Sensor sales increase over the past 5 years?

What will be the demand outlook for smart grid sensors through 2025?

Sales of smart grid sensor services are projected to increase at 13% CAGR and be valued at over US$ 720 Mn by 2025.

What are the key trends being witnessed in this marketplace?

Key market trends include adoption of IoT technology with smart grids and energy infrastructure across the globe.

What is the market share of the top 5 manufacturers of smart grid sensors?

Which countries are registering high growth in the European market?

The U.K. and Germany together held almost 50% share of the Europe market in 2021.

Which are the top 5 countries driving most demand for smart grid sensors?

RF filter market to grow at a stellar value CAGR of 17.3% during the period of forecast, 2018-2026. RF filter sales are estimated to touch a value of around US$ 25 Bn by the end of the period of assessment..

Anticipated to reach a valuation of approximately US$ 29.7 Billion in 2019, the global demand for residential lighting fixtures is expected to grow at a steady rate of 4.5 percent CAGR, through the period of 2018-2026.

Global market for SD memory card is projected to bring in US$ 8,952.9 Million in terms of revenue along with a healthy CAGR during 2017-2022. Details inside.