Global Market Study on Internet of Things (IoT): IoT Platform Projected to be the Most Attractive Segment in Terms of Value

The proliferation of interconnected networks and the explosion of data volumes across smart homes and smart grids in different industries has been in large part due to the mushrooming of devices, particularly mobile devices. Data integration from various cyber, social, and physical resources within the IOT market enables the development of apps and services that can incorporate situational decision making mechanisms and create enhanced services along with smarter applications. Fog computing is another new technology similar to edge computing in the IOT market. Fog computing is quite likely to support the IOT market and can exist in data centers, the cloud, or even edge devices such as routers, gateways, sensors, etc.

Edge computing is a relatively new concept in the IOT market compared to cloud analytics. In the case of edge computing, data is processed near the source instead of in the cloud. Edge analytics is currently at a developmental stage but can still be successfully implemented in large IOT deployments because of the handling of large data volumes. The factors benefiting widespread edge computing adoption are better data security, latency reduction, and lesser connectivity issues. Many vendors in the IOT market are launching edge analytics solutions to attract more clients and expand their product portfolio. In April 2017, Microsoft Corp. launched the IoT Central service to manage the enterprise IoT ecosystem. IoT Central allows enterprises to launch new products and is a part of SaaS.

Companies would be advised to focus on the IoT Platform and IoT Analytics segments in the global IOT market. The IoT Analytics component is predicted to grow to nearly 5x its size in 2017 and be a market opportunity exceeding US$ 50 Bn in 2025. The CAGR for the IoT Platform is considerably higher at 25.6% during 2017-2025, making it critical in the long term. 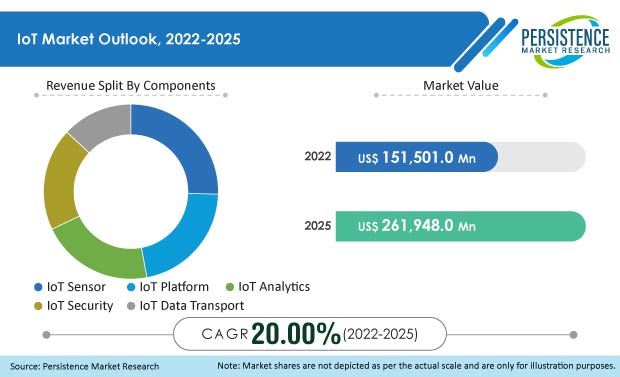 Smart City Projects to Propel the IOT Market Across the Globe

Smart cities are the buzzword of the 21st century and are popular due to digital technologies becoming essential in both developed and emerging economies. Smart cities comprise electronics equipment effectively deployed in areas such as smart traffic, smart homes, smart utilities and security. A recent trend has been the need for IoT devices in home gateways, smart meters, smart sensors, smart appliances, and smart plugs, primarily because of governmental encouragement. In addition, people are expected to demand smart technology in all of their gadgets such as connected cars, wearables, smartphones, and smart TVs. The U.S, Canadian, and Indian governments have taken the lead in the concept of smart cities and are launching projects for indigenous communities, regional governments, and municipalities. The national governments in these nations are inviting participation from local authorities, businesses, and civil society to implement clean, digitally connected technology consisting of advanced energy systems, smarter roads, and greener buildings.

U.S. Anticipated to Dominate the North America IoT Market in the Future

It isn’t surprising that North America is the largest region in the global IOT market as the continent is often at the forefront of technological innovation and acceptance. The U.S. market is already twice the size of its northern neighbor and is likely to remain so for the foreseeable future. Within North America, IoT Analytics and IoT Security are poised to push past US$ 17 Bn and US$ 23 Bn respectively. However, key stakeholders in the North America IOT market may want to consider the fact that both IoT Platform and IoT Data Transport record a higher CAGR for the period.

The global adoption of smartphones has surged as Internet services such as online banking, e-education, and e-commerce become the norm and not the exception. Worldwide Internet users have skyrocketed with the advent of 4G, making the time ripe for the Internet of Things (IoT) market to gain widespread acceptance. Persistence Market Research has studied the global IoT market in its upcoming report titled ‘Internet of Things (IoT) Market: Global Industry Analysis 2012-2016 and Forecast 2017-2025’ for a period of eight years starting in 2017.

The research methodology implemented by Persistence Market Research is trusted by our customers and envied by our competitors. Our team of highly knowledgeable analysts begin with exhaustive primary and secondary research in the global IoT market. A questionnaire that assists in the extraction of critical data from all key nodes of the value chain is prepared. The data is thoroughly scrutinized by way of a triangulation method that combines our analysts’ recommendations with both primary and secondary research. The IoT market report data is finally validated with advanced company tools to deliver all the qualitative and quantitative insights on the IoT market.

The globally IoT market has been analyzed by dividing it into emerging economies and the developed world. Both have been given an equal emphasis in our report. We have a dedicated section for each where we mention the regional drivers, restraints, opportunities, and threats and their impact thereon. The historical market size of the largest countries in every major region has been compared and contrasted with the anticipated future growth so that you can gain a clear picture of the direction of the IoT market. The regional chapters further include a detailed assessment on the basis of component, application, and industry – particularly helpful for companies that seek to target only one section in a specific region.

The competition in the IoT market is as dynamic and fast-changing as the IoT market itself and being nimble and attuned to rapidly changing market requirements is the only way to thrive. That is why a full-fledged competition analysis is critical. In this informative section of the IoT market report, we have profiled some of the most prominent companies actively involved in the IoT market. A few globally renowned companies that shape the IoT market are SAP, Honeywell, Qualcomm, Microsoft, Apple, and Google. The company description, SIC codes, general overview, key financials, and worldwide revenue share are given. In addition, special attention has been provided to the recent developments and strategies adopted by each respective company so that you can make your long-term business strategies accordingly.

The market introduction chapter is an outline of the IoT market and is recommended for readers who wish to understand the IoT market at the grassroots level. It includes the definition, taxonomy, snapshot, and overview of the IoT market. The value chain that encapsulates the relationship between different stakeholders in the IoT market such as chip vendors, module providers, app developers, aggregators, and system integrators is adequately highlighted here.