From 2016 to 2020, sales of industrial engines increased at a CAGR of around 3%. Especially in countries where power generation and mining industries are booming with respect to absorption machines, there were also significant developments at the supplier end.

Persistence Market Research expects the global industrial engine market to expand at over 6% CAGR through 2031.

What are the Key Opportunities for Industrial Engine Manufacturers?

Rising use of off-road vehicle engines can be attributed to global expansion of construction and agricultural machinery. Rapid urbanization combined with increase in infrastructure activities in both, residential and non-residential sectors, has fueled demand for construction machinery.

Furthermore, government initiatives, particularly in developing countries, to increase farm mechanization, have boosted demand for agricultural machinery such as power tillers and heavy-duty tractors. As a result, these factors are responsible for increasing demand for engines used in off-road vehicles that are used in construction and agricultural activities.

What are the Roadblocks for Industrial Engine Suppliers?

Infrastructure investments, particularly in construction machinery, have increased in recent years as a result of greater need for environmental sustainability. However, higher capacity performance is still not comparable to diesel engines, and, as such large off-road diesel engines are widely used in agricultural and construction equipment.

Which Region Offers the Largest Opportunity for Sales of Industrial Engines?

With an absolute dollar opportunity of around US$ 900 Mn, North America is expected to be the most lucrative market for industrial engine suppliers. The U.S. is leading the North American market, and is expected to witness high growth during 2021-2031. Presence of key market participants is influencing the market dynamics in the region. 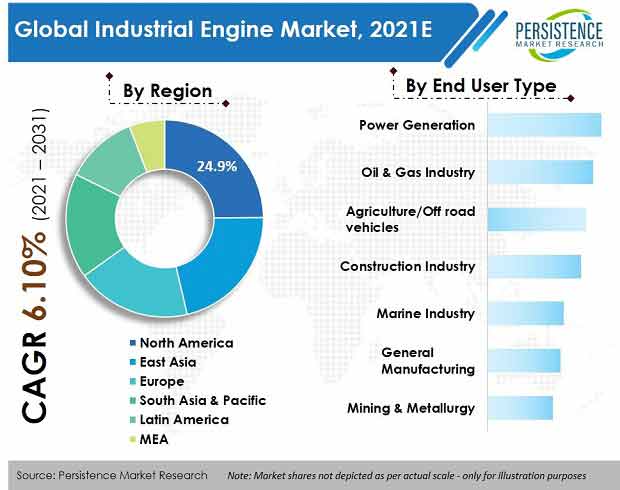 Why is the U.S. a Lucrative Market for Industrial Engine Manufacturers?

The market in the U.S. grew by 2% from 2016-2020. In the U.S. presence of engine manufacturers is very high. These players dominate a larger market share of industrial engines. There have been notable developments from the supplier side with regards to new engine offerings.

What is the Potential for Industrial Engines in Germany?

The market in Germany is approximately one-tenth of the European market. Components for diesel engines and other industrial engines are available especially for commercial industrial applications.

Why is Japan an Important Market for Industrial Engines?

The market in Japan is expected to be valued at around 342 Mn in 2021. In the current scenario, efforts are continuously being made to deliver advanced models of engines for civil and military applications in the country. Suppliers are engaged in partnerships and acquired licenses for manufacturing with European and American manufacturers.

Large-scale development of super-alloys for engine components and engine materials is ongoing as part of national programs in the country. There is also larger emphasis to target the gas engine market and cater to current and future engine material technologies in Japan.

China comprises nearly 7% share of the global market for industrial engines. The regulatory environment in China is shaping with the development of emission standards for diesel mobile non-road engines.

Latest guidelines state that constant speed diesel engines must be tested over NRSC and variable speed engines over NRTC, and that there should be no visible smoke during DPF regeneration. This has led many companies to pour in significant investments to improve engine designs and benefit from market growth in China.

Which Type of Industrial Engine Witnesses Most Demand?

Why are Diesel-powered Industrial Engines Popular?

Diesel-powered engines have high growth potential backed by supplier-side developments. The segment holds nearly 60% share of the total market based on fuel.

Diesel-powered engines are used in a number of industrial applications, such as marine engines, power generation, oil & gas, and mining. Global regulatory background is also supporting the growth of this segment.

Water-cooled industrial engines were valued at nearly US$ 90 Bn in 2020. This technology is comparatively economical because water-cooled engines improve thermal efficiency and prevent overheating. They also help maintain engine temperature, and hence, are preferred by a lot of end users.

Will the Popularity of 4-stroke Industrial Engines Keep Rising?

Sales of 4-stroke industrial engines were valued at nearly US$ 95 Bn in 2020. It has been estimated that market growth for these engines will be moderate over the coming years, but developments will be seen largely. These engine are mostly used in power generation.

Which Application of Industrial Engines is Most Popular?

The industrial engine market is highly competitive with top players holding nearly 70% of the global market. New product launches and expansion of production facilities are found to be some of the key developments in this space.

Key strategic partnership and collaboration initiatives are observed to be followed by many players.

Worldwide revenue from bandsaw machine sales is expected to increase from US$ 3.2 Bn at present to US$ 4.7 Bn by the end of 2032.

Garnet has a varied range of industrial application, out of which, it is estimated to hold around 35% share in the waterjet cutting machine consumables market, globally. This demand for abrasives is anticipated to rise, precisely for abrasive blasting media and waterjet cutting..