Historically, from 2016 to 2020, use of industrial carbon dioxide increased at around 2.3% CAGR, wherein, countries such as the U.S. and China held significant share in the global market.

On a global scale, with the growing food & beverage industry in key regions such as Asia Pacific, which is the fastest-growing region in terms of consumer spending on eating out, and MEA in the second spot, is anticipated to also increase consumption of industrial carbon dioxide that has some key applications in the food as well food processing industry.

Rising prices of crude oil and increase in global fuel consumption have made (enhanced oil recovery) EOR a very important factor to be considered; makes use of industrial carbon dioxide for the extraction of oil from injection wells to the production wells, with the additional benefit of using Carbon Dioxide from power plants or industrial sources that could help reduce carbon footprint.

Considering these statistics and shift in dynamics, the market for industrial carbon dioxide is forecast to expand at a healthy CAGR of 3% over the coming 10 years.

What are the Key Opportunities for Industrial Carbon Dioxide Manufacturers?

Key opportunities are there for manufacturers that they are vertically interconnected with companies such as Air Products & Chemicals Inc. and Universal Industrial Gases Inc. This gives businesses an edge in terms of raw material sourcing and delivery, allowing them to achieve the optimal standard for economies of scale.

Carbon dioxide manufacturers are now concentrating on carbon capture and utilization. Producers capture carbon dioxide produced by the combustion of fossil fuels, which is then used for EOR in the oil & gas industry and also in the production of sodium bicarbonate, which, in turn, is used in food, beverage, and pharmaceutical industries.

Furthermore, policymakers around the world are increasingly intervening to support and incentivize improved oil recovery strategies, which would help carbon dioxide producers.

What are the Roadblocks for Industrial Carbon Dioxide Suppliers?

The GHGs (Green House Gases) law in different regions is one of the major challenges faced by carbon dioxide producers. One of the primary reasons for the imposition of such strict laws is that regulatory authorities in different regions are focused on reducing carbon emissions by 2050. Breaching these regulations could lead to lengthy production halts, resulting in decrease in cash flow.

In addition, energy has been the highest cost item in the processing and sale of carbon dioxide for key players. Primary energy sources for the manufacture and delivery of carbon dioxide are electricity, natural gas, and diesel fuel. Energy efficiency and expense remains a big issue for market participants.

Why is the Food Manufacturing Industry Expected to Have High Demand for Carbon Dioxide?

Use of cryogenic solutions in high-quality food processing is gaining traction, fueled by growing need for food security and protection. Liquefied carbon dioxide is increasingly being used in cryogenic freezing and cooling applications to improve the refrigeration value of food items, especially beef, poultry, and baked goods.

Which Region Offers the Largest Opportunity for Sales of Industrial Carbon Dioxide?

With an absolute dollar opportunity of around US$ 600 Mn, North America is expected to be the most lucrative market for industrial carbon dioxide suppliers. The U.S. is leading the North American market, and is expected to witness steady growth during 2021-2031.

Carbon dioxide demand is high in countries where oil & gas activities use EOR. The United States is the primary market for carbon dioxide-enhanced oil recovery, with over 71 oil & gas facilities employing it because the cost of processing an additional barrel of oil is lower. This makes the U.S. a dominant market when compared to other regions. 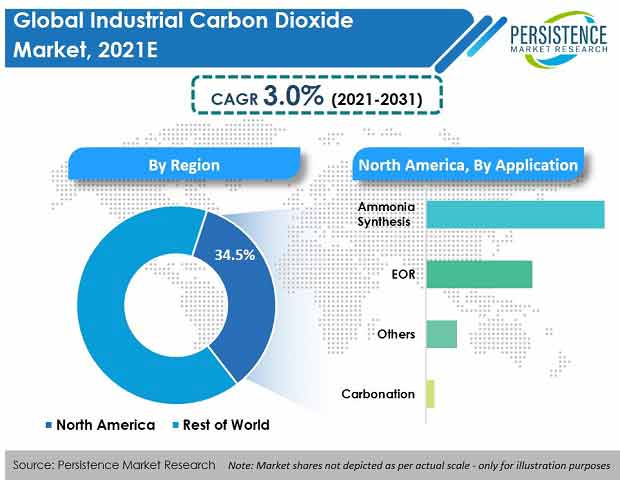 Why is the Mature U.S. Market for Industrial Carbon Dioxide Still Growing at Over 3% Annually?

The market in the U.S. grew by 3.1% from 2012 to 2020. Presence of a vast number of oil & gas exploration sites and refineries in North America is supporting demand for carbon dioxide.

One of the primary reasons for increased carbon dioxide output in North America is the presence of a large number of main players in this regions as a result of increased demand from end-use industries.

The U.S. is witnessing increased intake of food grade and beverage grade carbon dioxide from the food and beverage sectors, owing to rising consumer spending on packaged and frozen food. For both these favourable indicators for carbon dioxide output and use, overall regional demand is more as compared to other countries.

In 2020, the market in China grew 3.4%. China is one of the major countries that has a disproportionately large share of the global carbon dioxide market. In comparison to other carbon dioxide processing firms in various countries, manufacturers in China have plants with higher production volumes.

Easy availability of resources and raw materials to produce industrial carbon dioxide is the prime reason that has been reflecting China’s dominant presence in the market, as players in the country can offer extremely competitive bulk prices for carbon dioxide.

What Role Does the Oil & Gas Industry Play in Driving Carbon Dioxide Sales?

The oil & gas industry accounts for around 33% share of the global carbon dioxide market. In this industry, carbon dioxide flooding is commonly used to recover oil from large reservoirs, wherein, the gas is injected into the reservoir in order to increase output when extracting oil.

Due to rising concerns of increased fuel prices, enhanced oil recovery is now an important aspect, which, in turn, is helping drive sales of industrial carbon dioxide, globally.

Chemicals, which represented over 50% share of industrial carbon dioxide sales in 2020, holds lucrative opportunities for market players. Use of carbon dioxide is seen in numerous other industries as well, especially in the chemicals industry for the synthesis of urea, a key chemical building block for the production of urea, which, in turn, is used as a fertilizer in the agriculture industry.

It is also used as a refrigerant, in dry cleaning, for inflating life rafts and life jackets, blasting coal, grain fumigation, supercritical extraction, promoting the growth of plants in greenhouses, and immobilizing animals before slaughter.

Which Application of Industrial Carbon Dioxide Can Act as a Future Opportunity for Growth?

EOR, as an application, accounted for over 30% of the industrial carbon dioxide industry in 2020. Growing concerns related to extraction of unused crude in production wells and increased consumption of carbon dioxide in the oil & gas industry, especially in the developed regions of North America, is aiding steady growth of the market.

Introduction of CCS technology during the process of EOR can also be one of the key driving factors for the future growth of the industrial carbon dioxide market.

How Has COVID-19 Skyrocketed Sales of Solid Carbon Dioxide?

As according to FDA, healthcare providers need to prepare and store vaccines under specified low temperature conditions until they are administered to people. Some COVID-19 vaccines need much lower storage temperatures than others, which can necessitate the use of dry ice or solid (frozen) carbon dioxide (CO2).

A majority of these key companies have concentrated on launching new products and extending their production operations in developing countries. Innovation, collaboration with industry players, partnerships, corporate alliances, and strengthening of regional and global delivery networks are examples of some of the strategies.

Similarly, recent developments related to companies manufacturing industrial carbon dioxide have been tracked by the team at Persistence Market Research, which are available in the full report.

Persistence Market Research anticipates forging lubricant sales to witness a CAGR of 5.6% over the assessment period of 2021 and 2031. In terms of volume, demand is expected to increase at around 5.3% CAGR over the same period..

The global rolling lubricants market, in value terms, is anticipated to expand at a CAGR of 5.4% over the forecast period of 2021 and 2031..