Demand for industrial dispensers has witnessed substantial growth in recent years, and this trend is projected to persist over the forecast period (2021 to 2031) as well at a higher pace, owing to increase in product enhancement via integrating newer technology.

In its latest revised study, Persistence Market Research offers insights about key factors fueling demand for industrial dispensers. The report tracks global sales in 20+ high-growth markets, where East Asia, by far, leads the way, followed by Europe. The report also analyzes the impact of COVID-19 on the demand and sales of industrial dispensers.

What is the Future Outlook on Industrial Dispensers in Comparison to Historic Sales?

In earlier times, the market was dominated by tier 1 players focusing on the acquisition of technology-driven companies. However, the market gained pace with various manufacturers focusing on joint product development and increasing efficiencies without compromising on quality.

Manufacturers have increased their collaborations with component manufacturers due to higher operational costs at their own manufacturing facilities. Manufacturers are also encouraged by Industry 4.0 and its advantages with respect to resource and energy sayings.

Research & development in industrial dispensers is anticipated to make significant contributions to market growth over the years to come. Several other new features by existing as well as emerging companies are likely to attract customers from other domains of the industry.

Owing to the ongoing crisis caused by COVID-19, production and supply chain activities witnessed a slump in 2020. Yet, consumption will improve with economic recovery post-pandemic. However, higher sales of industrial dispensers in the pharmaceutical industry as well as in other end-use industrial workplaces due to heightened sanitary and hygienic precautions are complementing market growth.

Persistence Market Research expects the global industrial dispenser market to expand at around 5% CAGR through 2031.

What is the Commercial Potential of Industrial Dispensers?

Industrial dispensers are mostly used in the food & beverage industry and pharmaceutical industry. Intricate and critical manufacturing processes within pharmaceutical industries are lucrative growth applications for industrial dispenser manufacturers. Higher focus on interconnectivity and automation due Industry 4.0 has presented itself as a growth driver for manufacturers who are introducing smart, sustainable, and connected products.

Higher research & development investments and rise in end-user satisfaction based on the performance and use of advanced technologies are strategies followed by many manufacturers. Moreover, establishing sales and service facilities in emerging countries coupled with long-term partnerships with regional distributors are also paving the way for the expansion of channel reach. 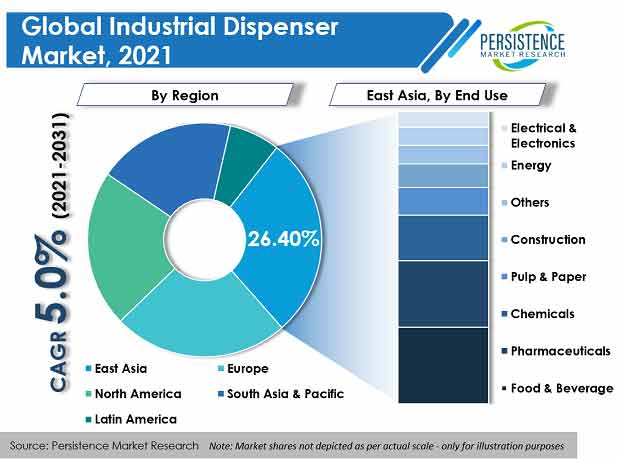 Why is China Considered to Be a Matured Market for Industrial Dispensers?

Persistence Market Research has projected China to remain one of the most lucrative markets in the East Asia region for industrial dispensers throughout the course of the forecast period. The economy of China continues to prosper due to its high manufacturing capability. Industrial dispensers have a higher market share in China owing to the high cluster of manufacturing plants of various manufacturers, excluding their own.

Will India be the New Hotspot for Industrial Dispenser Manufacturers?

India could emerge as a new hotspot for industrial dispenser providers. Several global manufacturers are relocating their manufacturing bases to the Asia Pacific region due to higher demand on the back of rapid industrialization. Lower wages as well as government initiatives by the Indian government for foreign investments will create positive growth aspects for market growth in India.

Why is Germany a Lucrative Market for Industrial Dispensers?

Demand for industrial dispensers from the automotive industry in Germany is expected to create substantial opportunities for manufacturers in the country. Industrial dispensers are finding new applications in vehicles involving battery encapsulation.

Automotive manufacturers are focusing on integrating newer and compact technologies and systems, which subsequently will increase demand for industrial dispenser technologies to accurately recognize drop and surface locations.

Demand from the pharmaceutical industry will provide an additional boost to the growth of the market. For instance, a new site has been approved for the production of Comirnaty, the COVID-18 vaccine developed by BioNTech and Pfizer. The facility, which is in the German city of Marburg, will produce both, active substance and the finished product.

What’s Driving Sales of Industrial Dispensers in the U.S.?

Growth of the food & beverage industry and rising demand from the pharma industry for vaccines and anti-viral drugs will also create significant opportunities industrial dispenser manufacturers over the forecast period.

How Can Taiwan Be an Attractive Market for Industrial Dispensers?

Preprocessing in semiconductor manufacturing facilities is one of the major applications of industrial dispensers. Adhesives are used for processing, whereas, coatings are used in many situations for functionalization and surface processing. Automatic industrial dispensers with precise drop technologies are therefore expected to create higher absolute dollar opportunities in the Taiwanese market.

Which End-use Industry Drives Most Demand for Industrial Dispensers?

Why are Automatic Industrial Dispensers Most Popular?

Automatic dispensers dispense matter pre-programmed depending on the surface location as well as the amount of matter to be dispersed. Automatic dispensers are intuitive with a number of operations modes and routines, which make them the most popular product, although with a higher price than the other types under the operation segment.

Why are Sales of Liquid Industrial Dispensers Surging?

Liquid dispensers are the most demanded type in the market. Various throughputs via industrial dispensers such as coatings, adhesives, and lubricants are often manufactured in their liquid state and used by end-use industries in the same form. Manufacturing processes such as lubrication and adding adhesives to weary parts at manufacturing plants in various end-use industries is expected to increase demand for industrial dispensers.

The market is fragmented in nature, with the presence of a large number of players in the unorganized space, such as regional or local players. Manufacturers are focusing heavily on research & development activities. With acquisitions, several manufacturers, in recent years, are leveraging design, high quality, and durable products to enhance market dominance over other players in the market.

Manufacturers are also aiming at establishing collaborations to address the growing demand of an expanding customer base. Complex and custom projects with clients in various industries are not only helping manufacturers by enhancing their product offerings, but also to maintain existing customer relationships as well as expanding their client base.

Persistence Market Research expects the global switchgear monitoring system market to expand at a CAGR of over 4% through 2031..