Market Study on Safety Gloves: Sales of Durable Gloves to Be Higher Than Disposable Variants

From 2017 to 2021, worldwide demand for safety gloves increased at a noteworthy CAGR of 6.4%, with the United States, Japan, China, India, and the U.K. holding significant shares in the global market and leading the race. The global market ended up with revenue worth US$ 11.13 Bn at the end of 2021.

Several occupational or industrial accidents occur when employees do not wear safety gloves. A lot of workers also wear gloves that are either not as per the required standards or are damaged. Such incidents highlight the high necessity of workplace safety and the need for the usage of safety gloves and personal protection equipment at the workplace.

The industrial environment has become increasingly sophisticated over time, yet, it still has a significant risk of accidents. Sharp items, heat and cold, chemical burns, contact dermatitis, and many infectious disorders can all be avoided just by wearing safety gloves while working in different setups.

All in all, the worldwide safety gloves market is being driven by an increasing number of cases of industrial injuries, and the market is projected to expand more than 2X over the next ten years.

What is Aiding the Growth of the Safety Gloves Market?

Over the past few years, there has been greater emphasis on improving societal health and hygiene. In today's world, good personal cleanliness is critical for both health and social reasons. People have accepted that keeping one's hands and torso clean is vital in preventing the transmission of disease and infection.

The COVID-19 outbreak led to a huge increase in the requirement for hand hygiene. Community programs have been a driving force in raising public awareness about the need for proper health and hygiene habits. As a result, safety gloves became more popular with the rise in consumer knowledge about hygiene and safety.

“Rise in Industrial Risks of Accidents”

The changing nature and forms of industrial risks caused by the rising usage of new materials, coatings, and interior designs are predicted to raise the demand for protection and safety equipment (particularly fire- and cut-resistant gloves). As a result, considerable opportunities exist in the creation of customized protective safety gloves that safeguard employees and operators from related threats.

Also, threats from chemical, biological, and nuclear (CBN) weapons have been witnessed in recent times. This, in turn, is diversifying the activities of safety and protection operations to deal with CBN threats. Thus, developing advanced designs mainly focused on ensuring protection from CBN threats and incorporating multi-functional and multi-hazard features can provide potential business opportunities for safety glove vendors and producers in the near future. 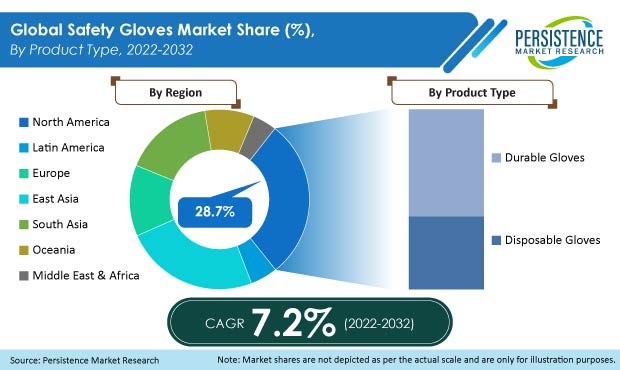 How is the Safety Gloves Market Progressing in the U.S.?

“Stringent Government Regulations for Safety of Workers in the U.S.”

The U.S. safety gloves market holds a major share of 74.3% of the North American region. The market is also anticipated to progress at a rapid pace during the forecast period.

The U.S. is a developed country with abundant end-use industries for safety gloves, such as manufacturing, healthcare, real estate, and others. The government in this country is strict and has passed stringent regulations for the safety of working individuals.

As a result, if any anomalies are discovered, the employer faces severe fines, and it also develops a negative image of the organization among consumers and in the market. Over the projected period, stringent government rules are likely to drive the demand for safety gloves across end-use sectors in the country.

Why is Saudi Arabia Turning Out to Be a Prominent Market?

Saudi Arabia is one of the key markets of the Middle East and Africa (MEA) for safety gloves & equipment and accounts for one of the highest regional market shares.

Saudi Arabia is known for its oil and gas business across the world. The country has made significant progress in the oil & gas sector. The industry drives significant demand for safety equipment owing to the harsh working environment in the sector. Due to substantial hazards inherent with upstream activities, this industry generates a wide range of potential business prospects for safety product vendors, including safety glove manufacturers, across the world.

“India to Lead Opportunity for Key Players in South Asia”

India is one of the emerging countries in the safety gloves market and accounts for a share of 22.1% of the South Asian market.

India is one of the prominent countries in the market due to rising industrial and urbanization projects. Government projects for smart cities are significantly going to increase the demand for safety construction equipment, including safety gloves and gear.

Moreover, with the rise in urbanization and population, consumer sectors such as food & beverages, hospitality, and consumer durables are growing rapidly growing and surging the demand for safety gloves in India.

Which Material is Most Widely Used in Safety Glove Manufacturing?

According to this analysis, based on material type, nitrile safety gloves hold a major share of more than 30% in the overall market and the segment is estimated to lead the market during the study tenure.

Nitrile aids in the maintenance of barrier protection with prolonged usage. Nitrile is commonly used in the manufacture of industrial and healthcare examination gloves. Nitrile has the benefits of being a good option for those who are sensitive to natural rubber latex, being resistant to oil-based products, glutaraldehyde, and many other chemicals, having great in-use durability, and being very resistant to abrasion and punctures.

Which End Use of Safety Gloves is Bringing in High Revenue Streams?

Based on end use, manufacturing accounts for a high-value share of 40.6% of the market and this is anticipated to remain high over the coming years as well.

Growth in manufacturing employment, particularly in emerging regions, along with an increase in production output, are the prime factors of the market. Furthermore, an increase in the usage of industrial safety equipment such as safety gloves in the manufacturing sector is anticipated to drive market growth substantially over the coming years.

Which Type of Safety Gloves is Mostly Preferred for Use?

According to our analysis, durable safety gloves account for 59.3% of the overall market share. Durable gloves are used in various types of industries, especially heavy-duty industries such as production houses and manufacturing companies.

Durable safety gloves are designed with enhanced durability to sustain for a long time. They are washable and reusable and provide high resistance to chemicals and heat. Hence, they generate heavy demand in the market as opposed to disposable safety gloves.

Safety glove manufacturers are strategizing and implementing a variety of penetration strategies to increase their sales in lucrative markets. These strategies include product rollouts, collaborations with established players, partnerships, acquisitions, and enchantment of regional and global distribution networks.

What was the safety gloves market valued at in 2021?

What was the historical CAGR that the market experienced?

Which is the most lucrative regional market for safety glove suppliers?

North America leads the global market and accounted for a share of 28.7% in 2021.

Who are the leading companies offering safety gloves?

At what rate is the safety gloves market projected to expand?

The global market for safety gloves is expected to expand at 7.2% CAGR through 2032.

The increasing popularity of tube or tubular shaped resistance bands that come with handles and can mimic various fitness machines is expected to boost the growth of the home fitness equipment market.

Global men’s underwear market was valued at more than US$ 3,000 Mn and was estimated to account for a slight increase in market value by 2016 end, reflecting a Y-o-Y growth of 4%.