For instance, in East Asia, roasted barley is widely used to make roasted barley tea, which offers a vibrant taste to consumers. Moreover, the Caffè d'orzo, a popular coffee drink in Italy, is made from roasted barley, and is considered one of the prominent coffee substitutes.

As consumers gain awareness about flavored food ingredients, the likelihood of them using roasted barley for beverages will increase, thereby boosting the growth of the global roasted barley market.

Increasing use of roasted barley in bakery products is another key factor driving the growth of the roasted barley market. Roasted barley offers better nutritional value, which is one of the key reasons spurring its application across diverse end products.

Barley is high in fiber, minerals, and antioxidants, and also offers better texture and flavor to end products, which makes it suitable to use in bakery applications. For instance, roasted barley bread is increasingly becoming popular among consumers due to its soft texture and better taste.

As the demand for healthy and quality bakery products is on the rise, subsequent demand for roasted barley is expected to increase in the future.

Mostly, consumers from developed regions such as Europe and North America are progressively moving toward the consumption of organic food products. This has positively impacted the sales of organic roasted barley in the global market. 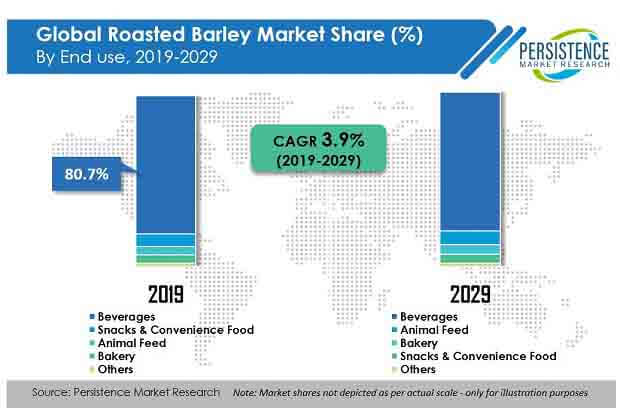 East and South Asia are projected to exhibit high growth in the global roasted barley market during the forecast period of 2019-2029. Growth witnessed in these regions is attributable to increasing per-capita food expenditure, coupled with rapid urbanization of developing nations in East and South Asia.

Europe and North America account for a significant share in the market in terms of value, owing to the higher production outlook of roasted barley in these regions. Europe has a large number of roasted barley manufacturers, supported by a stronger consumer base as compared to other regions.

Moreover, European countries also account for a major share in barley production, which is one of the contributing factors driving this market. North America is also expected to hold a noteworthy share in the global roasted barley market through 2029. Growth witnessed in the region is attributable to the increasing use of roasted barley for craft brewing.