Worldwide revenue generated by the laboratory developed test market was US$ 7.3 Bn at the end of 2021, with the market estimated to surge ahead at a CAGR of 6.4% to reach a market valuation of US$ 14.4 Bn by the end of 2032.

As assessed by Persistence Market Research, clinical biochemistry tests are expected to account for a market value share of 31.5% by 2032. Revenue from laboratory developed tests accounted for around 3.7% share of the global clinical laboratory service market in 2021.

Factors such as increasing healthcare expenditure on chronic and genetic conditions as well as rising cases of cancer among the population are set to fuel the consumption of laboratory developed tests over the coming years.

Laboratory developed tests are beneficial for the detection and monitoring of oncology, genetics, infections, and autoimmune diseases. These tests are the best option for the population curious about their genetic makeup concerning the presence of any disease-related markers.

Laboratory developed testing offers several advantages such as improved quality of life, monitoring pre-existing conditions, and maintaining one’s lifestyle accordingly, which makes them preferable over hospitalization for daily checkups or the treatment of disease occurrence. 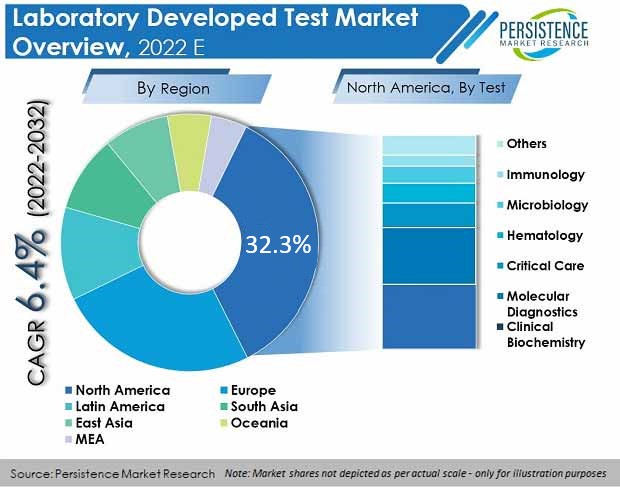 What Opportunities Lie Ahead for the Laboratory Testing Market?

Manufacturers of laboratory-designed tests across the world will have plenty of lucrative prospects in the years ahead. They have begun to recognize the value of R&D spending to provide a diversified product line.

Many companies are taking extensive measures to make their product offerings more versatile through innovations, such as providing data related to genetic health risks, ancestry, and traits.

According to the World Health Organization, cancer is the leading or second-leading cause of death for those over the age of 70 in 112 of 183 nations, and third or fourth in the other 23 countries. In many countries, the rise of cancer as a significant cause of death is reflected in lower death rates from stroke and coronary heart disease when compared to cancer.

How is Laboratory Developed Test Industry Expansion Being Affected?

Recalls of healthcare diagnostic products are a common practice aimed at either reducing any potential errors or eradicating an existing failure. Laboratory developed tests (LDTs) have been developed to treat a variety of disorders, including contagious diseases such as COVID-19, genetic conditions, and different types of cancer.

The Clinical Laboratory Improvement Amendments program (CLIA) governs labs that do tests on patient samples to assure accurate and consistent results. LDT is a test that is developed and used within a single laboratory, according to the FDA.

LDTs are often known as 'home brew' tests because they are produced in-house. LDTs are considered as 'devices', comparable to IVDs, as defined by the FFDCA, and are thus subject to FDA regulation.

The FDA made changes to its laboratory developed tests. Key changes to the agency's policy, according to a statement, were: For all serology test developers, the agency provided clear performance threshold guidelines for specificity and sensitivity.

According to the agency, all test kits should be authenticated before being used, because false outcomes can have a negative impact on both, individual patients and society as a whole. Manufacturers should publish directions for use, including a summary of assay performance on their websites prior to obtaining an EUA.

Why is the U.S. a Prominent Market for Laboratory Developed Tests?

“Rising Prevalence of Obesity Due to Sedentary Lifestyle in the U.S.”

The U.S. accounted for around 94.9% share in the North America laboratory developed test market in 2021, and is expected to showcase a similar growth trend over the forecast period as well.

The United States is ranked 12th in the world in terms of obesity.

Because of the population's sedentary lifestyle and increased knowledge of bad eating and living habits, the market in the United States is predicted to rise rapidly over the years ahead.

Will Germany Be a Lucrative Market for Laboratory Developed Test Providers?

Germany held around 19.7% share of the Europe laboratory developed test market in 2021, owing to rising chances of product approvals by regulatory agencies in the country.

Continued harmonization of global values can improve the adoption of laboratory developed tests across international markets. As these tests become progressively integrated and capable of producing vast data, analytical developments and ease of analysis will facilitate the adoption and diffusion of these laboratory-developed tests into practice.

Why is China Emerging as a Lucrative Market for Laboratory Developed Testing Services?

“Rising Incidence of Diabetes in China Due to Unhealthy Living Choices”

China held the largest market share of 59.8% of the East Asia laboratory developed test market in 2021, owing to rising unhealthy living conditions and dietary habits of the population.

As showcased above, demand for laboratory developed tests in China is bound to see an upward trend over the coming years.

By test type, clinical biochemistry tests held 33.5% market share at the end of 2021.

Fluids in the body are examined using clinical biochemical testing (blood, abscesses urine, cerebral spinal fluid, and collections in body cavities and joints). They can be used to track the course of disease management in addition to establishing a primary diagnosis. This is the best option for patients to get a basic idea of their illness.

As such, clinical biochemistry test usage is higher, followed by molecular diagnostic tests, and the segment is expected to drive high demand for laboratory tests in the future, globally.

Where is the Application of Laboratory Developed Tests Higher?

Use of laboratory developed tests for oncology purposes accounted for the highest share of 41.2% in 2021.

Consolidation activities such as product approval and launches, acquisitions, collaborations, and partnerships are actively looked upon in this market. Such consolidations will help market players expand their product portfolios and increase their market penetration, thereby driving their revenue share in the market.

What is the global laboratory developed test market size?

The global laboratory developed test market was valued at US$ 7.3 Bn in 2021.

What is the sales forecast for laboratory developed tests through 2032?

What was the last 5 years’ market CAGR for laboratory developed test consumption?

Which countries are prominent consumers of laboratory developed tests?

The U.S., China, Germany, U.K., and Brazil account for most of the demand for laboratory developed tests and currently hold 57.2% market share.

What is the U.S. laboratory developed test market stance?

The U.S. accounted for around 94.9% share of the North American regional market in 2021.

Who are the top 3 manufacturers of laboratory developed tests?

China held a share of around 59.8% in the East Asia laboratory developed test market in 2021, while Japan accounted for around 22.7% of the regional market share.

Worldwide revenue from the botulinum immunodiagnostics market estimated to evolve at a CAGR of 2.2% to end up at US$ 485.3 Mn by 2032..

Global IV tubing sets and accessories market is estimated to be valued at US$ 1.7 Bn in 2021, and is expected to exhibit a CAGR of close to 5% by year 2031 end.