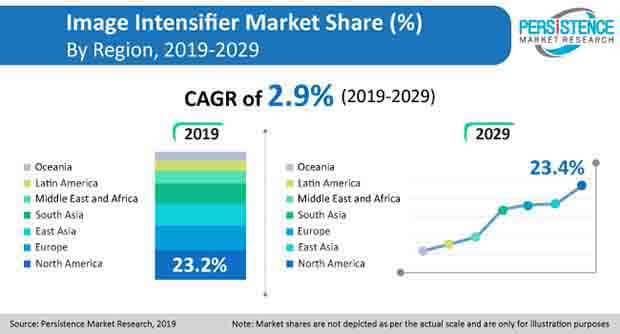 The adoption of advanced security and surveillance systems and constant increase in the defense budget are among the major factors contributing to the growth of the image intensifier market in South Asia.

The military & defense expenditure of various countries worldwide has been on the rise after the end of the Cold War, which is fuelled by an increase in the spending on the same by the U.S. and China, two of the biggest economies in the world. Moreover, several other countries, such as Russia, France, Saudi Arabia, the UK, Japan, and India, are spending a significant amount on their defense and military systems with the installation of image intensifiers, as they provide night vision goggles and scopes that can be installed on rifles or weapon systems.

Increasing awareness about the detection and prevention of unlawful activities is among the primary factors boosting the demand for image intensifiers. Increasing terrorist attacks and rising crime rates across the world are increasing the need for advancements in the surveillance systems of various regions. At present, developing counties are more focused on establishing smart cities. The most important aspect of these smart cities is security and surveillance 24 hours a day. As image intensifiers have the ability to provide night vision, they are very useful for monitoring at night or in low-light conditions.

A significant factor driving the global image intensifier market is an increase in the installation of image intensifiers in diagnostic systems in the healthcare industry for providing precise and better visibility. The overall function of an image intensifier is to transform the intensity of x-ray photons incident to light photons, for them to be able to produce a viable image.

There has been an increase in investments in healthcare due to the rapid ageing of the population, which has led to an increase in the number of people suffering from diseases and disabilities. This factor is likely to boost the demand for advanced healthcare equipment in the upcoming years.

While most of the key players maintain a strategic focus on the North America, Europe, and South Asia markets, the report underscores that technology assessment will be an important developmental strategy for companies.

Leading players in image intensifier market are also concentrating on entering into partnerships and collaborations and acquiring other providers, and this will remain a strong differentiation strategy. For instance, in April 2019, L3 Technologies, Inc. merged with Harris Corporation. Harris Corporation is a leading technology innovator and has customers in more than 100 countries.

Important entrants in the image intensifier market, such as Photonic and SYT Technologies, are strategizing on new product launches. For instance, in April 2019, both the above-mentioned companies developed the SYT SR750 long-range observation system to detect, recognize, and identify objects during the day as well as night.