Awareness about high-quality food that contributes to good health and offers nutritional value has led to consumer inclination toward healthy eating regimes. Soybeans add value to a diet by being a good source of protein, nitrogen, phosphorus, and potassium. Consumer-driven trend of vegan diets is becoming popular in many countries around the world, and has boosted demand for plant-based protein, which is found in abundance in soybeans. This factor increases the interest of consumers in soybean and its various products, which is aiding the expansion of the soybean rust control market size. This is because of the fact that, the soybean rust disease has devastating effects on the production of soybeans, thereby leading to increased need for soybean rust control to protect crops from rust.

Advancements in Farming Practices & Techniques Fueling Growth: With rapid increase in population, there is heightened demand for food production with limited land resources and manpower, and climatic conditions that necessitate the use of inputs such as narrow genetic base, use of intensive farming systems, and high dose of pesticides, soybean rust control, and fertilizers. The implementation of science & technology in agricultural products enables increased availability of food grains with plant protection measures and an amplified dosage of synthetic fertilizers. Advancements made with research & development in farming have helped implement control strategies for managing pests and diseases with higher use of pesticides, fungicides, and soybean rust control, which is fuelling the growth of the soybean rust control market.

Changing Climatic Conditions Favoring Disease Occurrence in Plants: Climatic changes have influenced the prevalence, occurrence, and severity of plant diseases. Climate changes cause effects between the interaction of crops and pathogens in many ways, and have impacted crop protection products. Changes in CO2 concentration and temperature have effects on disease development variations. Owing to changing climatic conditions and increased prevalence of diseases in crops, there has been increased demand for crop protection and soybean rust control products such as pesticides and fungicides that protect crops against these diseases. This is meant to minimize the devastating consequences on the production of crops on a global scale, which thereby increases demand in the global soybean rust control market.

Increased Applications for Soybeans to Drive Market Growth: Soybeans are known for various health benefits and high-protein content. Hence, they find various applications in the food industry. Current marketing of soybeans is in the packaged form with a variety of snacks made from soybeans along with use as garnish in salads. Soy milk proves to be a great alternative for lactose-intolerant consumers. Key players such as Archer Daniels Midland Company and Cargill, Incorporated incorporate soybean oil for many edible uses. With increased application of soybeans in the food, animal feed, and non-food industry, demand for soybeans is high.

Soybean rust control acts as a barrier in the large-scale production of soybeans, thus, driving the sales of fungicides that protect soybeans from diseases. This factor contributes to the growth of the soybean rust control market on a global scale. 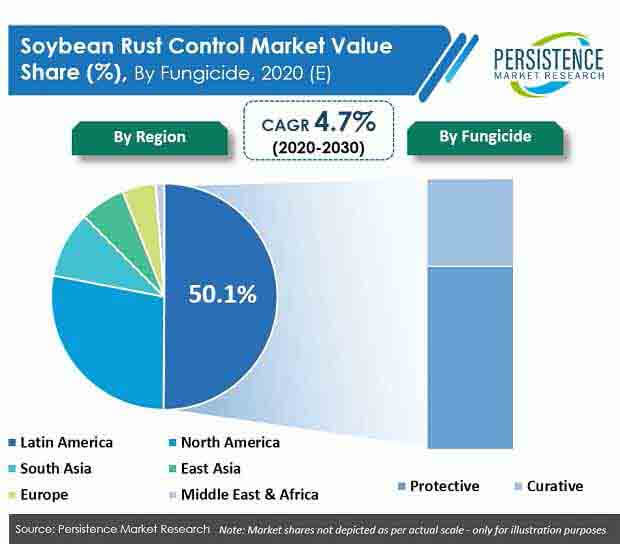 Brazil is amongst the largest producers of soybeans in the world, with 35.15 Mn hectares of land dedicated to the cultivation of the crop, owing to various factors supporting its production such as semi-temperate climate, fertile soil, high rainfall, and advanced technology. Brazil is also the largest exporter of soybeans in the world, generating valuable income for the country. Soybean rust can result in yield loss of up to 80% in soybeans, and thus, demand for soybean rust control against the disease is high in Brazil.

As the COVID-19 disease has spread across the world, most industries are witnessing a slowdown across the world. COVID-19 has affected both, supply and demand channels, and has also affected all elements of the food system, from primary supply to processing, trade as well as national and international logistics systems, to intermediate and final demand.

Countries such as Brazil and the U.S. are the largest producers of soybean in the world, which have been badly affected by the spread of COVID-19. Thus, production and export of the soybean have reduced during the pandemic. These factors have ultimately impacted the movement and demand for crop protection and soybean rust control products, adversely impacting the progress of the soybean rust control market.

The global soybean rust control market is anticipated to exhibit moderate growth, with North America and Latin America projected to offer potential growth opportunities during the forecast period of 2020-2030. Increasing spread of Phakopsora Pachyrhiziwhich rust on soybean crops will support the growth of the global soybean rust control market in the foreseeable future.

The numerous health benefits associated with soybean has led to a growing demand for soybean as a protein as well as lactose substitute. At present fungicides is one of the main methods for soybean rust control. The manufacturers should come up with partnerships with other leading fungicide companies for the development of highly resistant fungicides for effective soybean rust control. Moreover, the manufacturers should also focus on collaborating with crop science departments for the introduction of new soybean variants with resistant traits to the causative agents.

Our analysis will follow a modeling-based approach and triangulation methodology to estimate data covered in this report. A detailed market understanding and assessment of the applications, types, forms, and end uses of the product segments covered in the study is followed by carrying out a demand-side approach to estimate the sales of target product segments, which is then cross-referenced with a supply-side assessment of value generated over a pre-defined period. The statistics and data are collected at a regional level, consolidated and synthesized at a global level to estimate the overall market sizes.

Dry molasses for specific end-use industries is a major driver that is expected to propel demand over the forecast period of 2020 to 2030..

Global berries market is expected to register a CAGR of 5.1% along with a healthy revenue during the forecast period of 10 years from 2017-2027. Details inside.