After these, there are three quality control methods to be followed, such as quality control steps for raw materials, for the production process, and for the finished feed premix. There are various processes during the course of quality control, such as flushing, sequencing, and the mixer cleanout procedure. 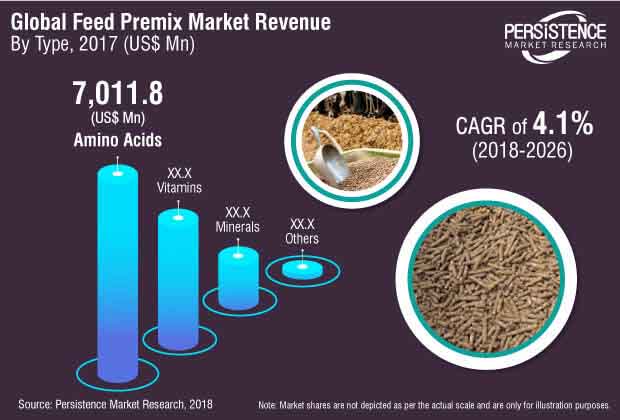 Vitamins are certain organic compounds and a type of macronutrient that is needed in small quantities by animals in order to sustain life. There are various types of vitamins available, such as vitamin A, vitamin C, vitamin D, vitamin E, vitamin K, and the types of vitamin B. Vitamins are consumed as food, and are not naturally processed inside the body, which helps drive the feed premix

Minerals are certain chemical elements that are required by animals to perform various functions that are necessary for life. Minerals naturally originate from the earth, and are not secreted in the body. Hence, minerals should be consumed through food and water. Most minerals are obtained by eating plants and drinking water. There are various types of minerals such as iron, sulfur, cobalt, zinc, copper, iodine, selenium, and others. These minerals are used in animal feed premix.

Straight feed has been provided to horses as a pertinent source of energy for many years, however, the incompleteness of this feed has paved the way for compound horse feedstuff. .

Animal Feed Micronutrients Market is anticipated to witness a healthy CAGR of 4.2% during the forecast period, due to various factors, regarding which, PMR offers vital insights in detail..

Global animal feed additives market is set to experience value growth at 5.2% CAGR over the next ten years to be valued at around US$ 66.2 Bn..