Sales of compounding pharmacies increased at a CAGR of around 4.4% from 2016 to 2020. Rising medicinal droughts in required medication levels across the world, increasing cost of branded prescription equivalents, and inadequate accessibility to drugs are expected to fuel demand for compounded drugs over the coming years.

Key specialty pharmacies are focusing on strengthening their position by collaborating with local manufacturers and pursuing acquisitions to enhance their sales. Moreover, companies are targeting North America, Asia Pacific, and Europe through the adoption of research & development and partnerships in the market.

Persistence Market Research’s expects the global market to expand at a CAGR of 8.3% through 2031, attributed to exponential increasing medicinal droughts of prescription medicines, growing demand for Hormone Replacement Therapy (HRT) drugs, upsurge in demand for topical products, and rising popularity of pain management therapies, which will bode well for specialty pharmacies across regions.

What are the Key Opportunities for Compounding Pharmacies Market Players?

R&D of pharmaceuticals in novel mediums/forms and doses for the treatment of various disorders is likely to provide market participants with a profitable development potential. Manufacturers will also gain from increasing popularity of animal drug compounding and vet drug compounding, especially across North America and Europe.

Moreover, increasing FDA clearances on new drug applications and industrial collaborations are fuelling usage of high-quality products. Improvement and streamlining of regulatory processes in developing countries is expected to boost sales of compounding pharmacies in the near future.

How is Growing Popularity of HRT Fuelling Demand for Compounding Pharmacies?

Growing popularity of HRTs due to availability of APIs in varying dosages is driving the market for compounded HRT drugs. Demand for customized hormone replacement therapies have increased in the recent past as people have become more conscious about important health functions such as breast and bone health, erectile longevity, osteoporosis, mood swings, hot flashes, acute levels of depression, etc.

Accordingly, dosage requirements for specific customized solutions have increased demand for hormones such as progesterone after hysterectomy, testosterone replacement, infertility curing hormones, etc. These therapies are expensive and in high demand, owing to rapid growth of lifestyle-related diseases in the young population due to lifestyle changes and increasing stress levels

Which Factors are Restraining Demand for Compounding Pharmacies?

Primary factor restraining the usage of compounded drugs is unsafe compounding practices, which include compounding contaminations and non-adherence to GMP regulations. This is very prominent across sterile compounding involving injectable drugs and intravenous solutions.

Increase in number of restricted drugs is expected to dampen the sales prospects of compounded drugs from complex drug pharmacies. In this regard, the U.S. FDA noted that it plans to add four drugs to its list of drugs 'not allowed to be compounded' in bulk, by outsourcing facilities in June 2015. These include aprotinin (Trasylol), ondansetron hydrochloride (Zofran), bromocriptine mesylate (Parlodel), and acetaminophen (Tylenol). An order prohibiting the compounding of these drugs could reduce demand for common compounded drugs such as Tylenol.

Another major restraint that can hamper market growth is compounding sterile drugs, or drugs with sterile and non-sterile ingredients, which require special training and facilities and involve significant risk to drug safety when sterile drugs are compounded in non-sterile environments. Recalls of potentially unsafe compounded medications can exacerbate shortage problems.

Increasing regulatory pressure is expected to hamper the growth of compounding pharmacies globally. Those engaged in trans-boundary drug compounding and manufacturing of bulk drugs and ingredients need to be registered with the FDA, allow mandatory inspections, and abide by GMP guidelines.

Increasing product warnings in sterile compounding have been dampening the sale of compounded injectable drugs.

For instance, the U.S. FDA has expanded an original warning on Becton-Dickinson (BD) general use syringes of sizes 1mL, 3mL, 5mL, 10mL, 20mL, and 30mL. The FDA noted that interaction with the rubber stopper in some lots of these syringes could affect drug potency if filled in syringes and not used immediately.

Apart from these, complex drug pharmacies has seen that sterile drugs have witnessed more recalls than others across the globe, as they are more prone to compound contamination, and thus, not approved by the FDA. 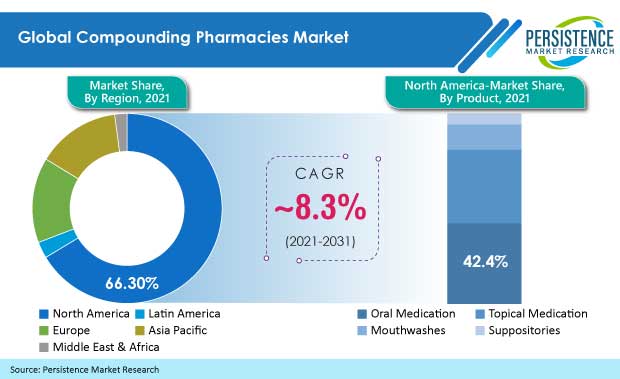 Will the U.S. Remain a Key Market for Compounding Pharmacies?

Why is the U.K. Considered a Highly Lucrative Market within Europe for Compounding Pharmacies?

The U.K. is expected to account for nearly 35.2% of the market share in Europe by 2031. Rise in demand for compounding pharmacies in the country is primarily due to high acceptance of compounded drugs, increasing lifestyle disorders such as obesity, diabetes, and others, shortage of drugs, and unavailability of standard drug products.

The China market is expected to account for around 6.7% CAGR in Asia Pacific throughout the forecast period. China also includes domestic market impact factors and regulatory changes that affect current and future market trends.

Increasing geriatric population and rise in research & development activities in order to enhance a variety of healthcare outcomes and achieve more precise and accurate findings are major factors driving market growth in the country.

Some of the key indicators of the Chinese market include data factors such as new sales, substitute sales, nation demographics, regulation, and import-export taxes in recent years.

Why is Demand for Oral Medication Rising Rapidly?

In terms of product, oral medication will hold high share of 43.5% in 2021, expanding at 9.6% CAGR during the forecast period, indicating high demand due to large number of patients preferring medicines through the oral route as it is convenient and economical.

Which Application of Compounding Pharmacies is Most Popular?

By application, medication for adults will hold a high share of 53.3% in 2021, expanding at 9.5% CAGR during the forecast period, indicating rising demand due to number of health-related cases and growing demand for nutritional supplements and topical dermatological remedies and personalized medicine.

With the unprecedented COVID-19crisis, the diagnostics industry found itself on the frontline to deal with the global medical emergency, which not only crippled economies worldwide but also put immense pressure on healthcare facilities around the globe. The unanticipated level of demand for testing kits has pushed industry players into uncharted territories where their strengths are challenged on a daily basis.

The market is expected to experience short-term negative growth owing to sharp reduction in demand for compounding pharmacy-based medical products due to decline in physician visits and hospitalization rates.

However, ongoing advancements in compounded hormone replacement therapy will enable the market to provide significant growth opportunities for industry participants over the coming years.

Collaborations and acquisitions are key strategies used by compounding pharmacies to differentiate themselves from the competition. These tactics enable players to consolidate the resources required to ensure that their businesses have a long-term future in the industry.

Furthermore, these strategies enable two corporations to make use of technology that is already in place at one of the organizations and use it to assist them to enhance drug production.

Compounding pharmacies are focusing on product launches and expansion for, thereby, enhancing their market presence. Some of the recent instances include:

Greater the demand for active products, stronger is the pipeline, which will lead to increased demand in the market. There are huge opportunities for market players to invest in compounding pharmacies.

Similarly, recent developments related to compounding pharmacies have been tracked by the team at Persistence Market Research, which are available in the full report.

How much is the compounding pharmacies market currently worth?

The global market for compounding pharmacies is worth US$ 9.6 Bn in 2021.

What is the sales forecast for compounding pharmacies through 2031?

The market is expected to reach US$ 21.3 Bn by the end of 2031, with sales revenue expected to register a CAGR of 8.3% over the same period.

At what CAGR did the market expand over the past 5 years?

What are the key trends shaping the demand for compounding pharmacies?

Which are the top 5 countries driving demand for compounding pharmacies?

The U.S., Canada, Australia, U.K., and Singapore are the top 5 countries driving demand for compounding pharmacies.

What is the North America market outlook for the decade?

North America is one of the key markets for telemedicines. According to Persistence Market Research, the U.S. is estimated to account for over 83% value share in North America by 2031.

At what percentage is the market is expected to register growth in Europe?

Demand for compounding pharmacies is expected to register growth in Europe at 5.4% CAGR through 2031.

Which companies are key manufacturers of compounding pharmacies?

At what rate are compounding pharmacies projected to register growth in Asia Pacific?

Compounding pharmacies in Asia Pacific are likely to increase at a CAGR of 10.6% during the forecast period, with a market share of around 14.2% in 2021.

Which therapeutic area of compounding pharmacies accounts for the highest market share?

The global progressive multifocal leukoencephalopathy treatment market is projected to grow at a CAGR of 2.8% throughout the forecast period..

Leading companies in the global eye health supplements market are striving to consolidate their position by means of acquiring small and regional manufacturing firms in the landscape. Manufacturers are adopting commercial and social media campaigns to promote their products in the market, in order to enhance their sales and market share. .

PMR study report indicates that the global biological drugs market will witness a healthy CAGR of over 10% during the forecast period to reach US$ 287,139.7 by 2021.

Biobetters Market is segmented By Drug Class, Indication, Route of Administration, Distribution Channel, Region. Readers can also find the regional trends, regulations, and market growth based on the end users and countries in North America..