The global X-ray photoelectron spectroscopy market was valued at US$ 511 Mn in 2021 and is estimated to expand at a high CAGR of 6.4% over the next ten years. A comprehensive industry study reveals that the market will top a valuation of US$ 1 Bn at the end of 2032.

According to Persistence Market Research, X-ray photoelectron spectroscopy used in polymer & thin film industries held a market value of US$ 139.3 Mn in 2021, accounting for 27.3% of the overall market share.

If surface chemistry or thickness is crucial for product function and safety, the XPS examination is a reliable choice. The X-ray photoelectron spectroscopy method is frequently used to determine the chemical composition and useful quantitative data about the surface of solid materials.

With detection limits of around 0.1 atomic percent, XPS can identify all elements except for hydrogen and helium. This makes it the appropriate examination method for samples that are either conductive or insulating, such as metals, semiconductors, glasses, ceramics, strongly adsorbed liquids, or gases on surfaces, composite materials, and polymers.

The XPS system utilizes a method that can identify contaminants or impurities existing on the thin layers of polymer or plastic surfaces, providing information that could point to the manufacturing process as the problem's possible source. Additionally, employing XPS analysis can be accomplished in as little as 30 minutes when working in a materials processing lab.

In the pharmaceutical sector, there are fewer analytical techniques available for investigating surface chemistry these days. X-ray photoelectron spectroscopy is one of the two most effective methods for examining the surface chemistry of medications, time-of-flight secondary ion mass spectrometry being the second (TOF-SIMS).

With a vast array of applications of X-ray photoelectron spectroscopy, the global market is expected to witness a surge in terms of demand, as growing R&D activities in the pharmaceutical and biotechnology domains provide traction to the market.

The global X-ray photoelectron spectroscopy market is predicted to surge ahead at a CAGR of 6.4% and record sales worth US$ 1.03 Bn by the end of 2032. 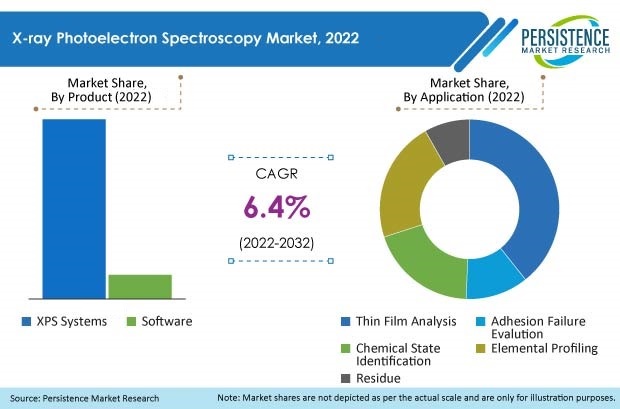 X-ray photoelectron spectroscopy is essential for getting access to both, quantitative and qualitative data, as well as for spotting the chemical functional group on any material's surface.

Since many forensic techniques used to detect and identify organic/inorganic substances and elements are destructive, it is impossible to conduct a second analysis of the evidence. However, XPS enables quick sample analysis without causing any damage to it.

Recently, a growing number of forensic experts have started looking into specific chemical information on finger marks. The usefulness and strength of XPS imaging in the analysis of finger marks are presented in several study assessments. This technique can also give precise details about the chemical makeup of the finger mark.

Thus, by simulating evidence from a crime scene, XPS can be used to identify the presence of products such as skin care products on latent finger marks, illicit drugs of abuse, and gunshot residue. This range of applicability for the use of XPS systems is expected to offer a lucrative outlook for market expansion over the projected years.

Despite all the advantages of XPS systems, there are still certain limitations because nothing is absolutely infallible.

For ultra-high vacuum conditions, samples for XPS should be suitable, as the tiny analytical region that XPS can measure is approximately 10 um. There is a limit to the amount of organic information that XPS can reveal because it is a surface method. Since XPS can only test atoms with atomic numbers 3 or higher, it cannot identify hydrogen or helium.

Obtaining XPS spectra results also requires a lot of time. The duration of each experiment can be shortened by using a monochromator. In repeated analyses, XPS has a relative error of 10%, just like other surface analysis methods. Additionally, there may be a 20% difference between the measured or inferred value and its real value.

It is also critical to keep in mind that, depending on the sample, size may be a limiting issue. Cutting a sample can result in additional contamination of the area of interest and is always not an option. Therefore, XPS may not be the best method to employ for material examination if the suspect sample may outgas when put under a vacuum.

Why are X-ray Photoelectron Spectrometer Manufacturers Targeting the U.S. Market?

In 2021, the U.S. accounted for a market share of 92.3% in the North American X-ray photoelectron spectroscopy market.

These numbers show the rise in the incidence of cancer and the resultant increase in research activities. Because of this fact, the industry is growing faster as XPS is used more often in the creation of nanoparticles for cancer therapy.

How is Demand for X-ray Photoelectron Spectroscopy Shaping Up in Germany?

Germany accounted for 26.7% of the European X-ray photoelectron spectroscopy market share in 2021 and is projected to gain steady growth in the following years.

The level of contamination in medications and their formulations, as well as research and development and chemical evaluation for cancer drugs are all being addressed with the help of the government in Germany.

The industry will profit from new reimbursement policies and increased public investments in healthcare infrastructure.

Why is Japan a Prominent Market for X-ray Photoelectron Spectroscopy?

In 2021, the Japan X-ray photoelectron spectroscopy market held nearly 40% of share of the East Asian market. It is further estimated to exhibit lucrative growth over the projected period.

Such solid devices are aimed to dominate the global market as an indispensable analytical instrument and will drive Japanese market growth.

“High Demand for XPS Systems across the World”

XPS systems, amongst all the products, accounted for the highest market share of 88.1% by revenue in 2021.

The preference for XPS systems in research and development operations for drug discovery, which calls for the surface examination of chemical, synthetic, and biological components, is a major factor driving the demand growth for XPS systems.

Which Application Accounts for High Usage of X-ray Photoelectron Spectrometers?

Thin film analysis contributed the highest market share of 39.3% in 2021 and is projected to dominate over the forecast period as well.

These thin films are used in a wide range of industries. For instance, in the pharmaceutical industry, thin films are known as an alternative to conventional dosage forms as they are easy to consume and have a rapid dissolving property.

This property of thin films makes them more convenient for drug delivery. For this, spectroscopy is the most effective way to determine the thickness of the thin film for the purpose of safety.

Leading suppliers of X-ray photoelectron spectroscopy devices are aiming at alliance and accreditation to expand their product demand and sales footprint across countries.

Similarly, recent developments related to companies manufacturing X-ray photoelectron spectroscopy equipment have been tracked by the team at Persistence Market Research, which are available in the full report.

How much is the X-ray photoelectron spectroscopy market worth?

What is the sales forecast for X-ray photoelectron spectroscopy systems?

The X-ray photoelectron spectroscopy industry is set to reach US$ 1.03 Bn by 2032.

Who are the key suppliers of X-ray photoelectron spectrometers?

What is a key trend shaping the X-ray photoelectron spectroscopy space?

Growing R&D activities in the pharmaceutical and biotechnology industry is a key trend shaping the global market for X-ray photoelectron spectroscopy.

Which 5 countries account for the highest demand for X-ray photoelectron spectroscopy?

The U.S., India, Germany, U.K., and Japan account for the most demand for X-ray photoelectron spectroscopy systems.

What is the U.S. market outlook for X-ray photoelectron spectroscopy?

At what percentage is demand for X-ray photoelectron spectroscopy expected to register growth in Europe?

The European market for X-ray photoelectron spectroscopy is expected to record 6.3% CAGR over the decade.

How is the Japan market faring?

The global humanized liver mice model market is projected to account for over US$ 22.8 Mn in terms of value by 2026 end, according to a latest research by PMR.

Globally, semi-synthetic opioids segment accounted for more than 90% revenue share of the industry in 2016 and is expected to gain more than 10 BPS in its market share by 2024.

Global cell free protein expression market is projected to expand at a CAGR of 6.0% and market value is expected to increase to US$ 268.4 million by 2024 end.