Additionally, food service providers are increasing their capital expenditure on refrigeration systems in order to cater to strong consumer demand for frozen food and chilled products.

Also, the number of licensed and franchised stores of limited service restaurants such as McDonald’s and Subway is growing, leading to an increase in demand for refrigeration systems.

These aforementioned are expected to drive the overall expansion of the refrigerated glass door market size, at a healthy CAGR of almost 7% through 2030.

Rapidly Growing Retail Sector: Over the last decade, there has been a significant increase in the number of retail stores across the globe. Major players in the retail sector are expanding their footprints in emerging markets of Asia Pacific, especially in India and China, in order to capitalize on growing consumer spending power in these countries.

Organized retail stores account for 10–11% of the overall retail sector in India. However, the number of large format retail stores in the country is expected to increase at a healthy rate over the forecast period. All this bodes well for the growth of the global refrigerated glass door market over the coming years.

Rapid Growth of F&B Industry Coupled with Expanding Warehouse & Logistics/ Cold Supply Chain Facilities: Increase in food & beverages production along with the expansion of cold chain capacities in order to ensure efficient storage and minimize wastage of food is expected to boost the growth of the refrigerated glass door market across the globe over the forecast period.

Stringent Government Regulations - Major Challenge for Medium and Small OEM and Part Suppliers: Stringent government regulations regarding the use of natural refrigerants over fluorochemical-based refrigerants that are widely used in refrigerated glass doors, especially in developed economies, is a major challenge for small and medium players.

The EU recently published f-gas regulations regarding the use of natural refrigerants such as CO2, hydrocarbons instead of fluorochemical-based refrigerants. This factor is a challenge for the progress of the refrigerated glass door market space. 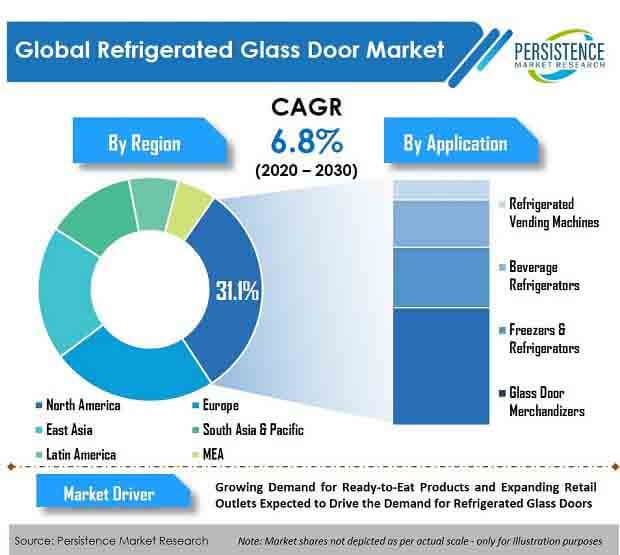 Manufacturers in the refrigerated glass door market focus on the expansion of their business through establishing new distribution centers and sales offices. Along with this, prominent players are focused on acquisitions and mergers with local players or end-use industries such as cold chain, food production, and food retail industry.

The COVID-19 pandemic has thrown the economies of most countries out of gear, and almost all sectors are suffering as a result. The same holds true for the refrigerated glass door market too.

As a result of lockdowns, trade restrictions, and slowdown of manufacturing, the supply chain of the refrigerated glass door market has suffered, resulting in both, reduced manufacturing and demand. The market is expected to make a V-shape recovery as time goes by.

Europe possesses highly developed food preservation infrastructure, and hence, future growth in the refrigerated glass door market is expected to be moderate to low as compared to other regions. Europe implements some of the most stringent regulations on walk-in cooler & freezer production for GHG emissions and energy consumption, as a part of several global warming and climate control initiatives, as over 30% of total energy consumption in Europe is attributed to refrigeration. Overall, the global refrigerated glass door market is slated to expand at a CAGR of nearly 7% through 2030.

PMR’s study on the refrigerated glass door market is divided into three significant segments – door type, application, and region. This report offers comprehensive data and information about the important market dynamics and growth parameters related to these categories.

Global industrial refrigeration equipment market was estimated to be valued at nearly US$ 6,750 Mn in 2017 and is poised to reach a market valuation of about US$ 11,700 Mn by 2026.

The beverage refrigeration equipment market growth is influenced by various food and beverage retail stores that use the equipment.

Commercial refrigeration fans are fitted in refrigeration equipment to promote even air-flow and cooling throughout the cabinet. These fans are used to draw out hot air and ensure a supply of fresh air, which is cooled by the refrigerant pumped from the compressor..