The global market for smartphones is expected to show significant growth over the coming years owing to the rising trend of e-Commerce and m-Commerce, particularly among the working population. Growing Internet penetration, increasing marketing activities by smartphone vendors, and rising subscriptions in social media are some of the key factors driving global smartphone sales.

Economic slowdown due to the COVID-19 pandemic led to rising demand for low-priced smartphones. However, over the coming years, rising disposable income will increase the probability of consumer spending on media, entertainment, and networking & mobile communication, leading to higher potential sales of consumer electronics such as smartphones, tablets, laptops, and gaming consoles.

Global smartphone sales increased at the rate of 2.7% over 2016-2020. Demand for smartphones has grown owing to integration of Artificial Intelligence (AI) technology in many mobile phones. Major companies such as Apple, Samsung, and Huawei operating in the market are introducing powerful smartphone AI chips that can use considerably less power to accomplish more tasks and perform up to 5 trillion operations per second.

Persistence Market Research identifies North America, followed by Asia Pacific, as the leading smartphones market. Expansion in North America is supported by the presence of advanced telecom infrastructure, rapid 5G deployment, and presence of key smartphone manufacturers in the region.

Overall, the global mobile phones market is set to expand at a CAGR of 6.8% through 2031.

What are the Key Factors Driving Demand for Smartphones?

Introduction of 4G LTE technology and 5G services across various developing countries is expected to drive sales revenue of smartphones in such countries. 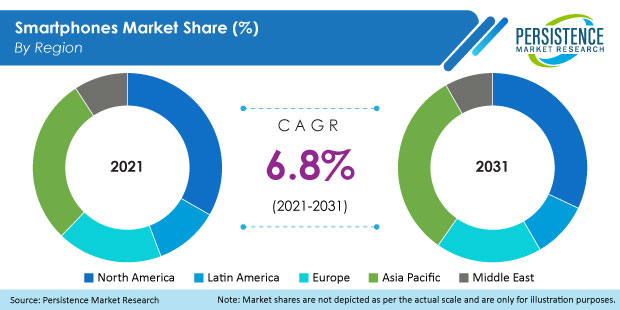 Why is the U.S. Smartphones Market Still Growing at a Fast Pace?

Currently, the U.S. smartphones market is anticipated to experience the highest growth in the North America market over the forecasted period, expected to expand at around 6.6% CAGR through 2021 to 2031.

Will India Be a Prominent Market for Smartphone Suppliers?

India accounts for one of the large consumption of smartphones in the APAC region, after China. The India smartphones market is expected to progress at a high CAGR of around nearly 9.5% over the forecasted period. High growth in India can be majorly attributed to rapid telecom infrastructure and economic development in various cities of the country.

Additionally, other factors such as increasing inflow of low-priced and high-end electronic components & products in the Indian market is expected to support the demand growth of smartphones. In terms of value, smartphone sales in India are projected to grow 2.5X in the next ten years.

Consumer electronics manufacturers in Europe are investing substantially in smartphone manufacturing, especially in Android smartphones, followed by iOS smartphones. The Android operating system is dominating the Europe smartphones sector, whereas, the iOS segment accounted for over US$ 35 Bn of the U.K smartphones market in 2020.

Which Operating System Holds the Largest Share in Smartphones?

By operating system, the Android segment is expected to continue its dominance over the forecast period. However, the iOS segment is set to expand at a higher CAGR of around nearly 6.2% during 2021-2031.

Growth of the Android segment can be attributed to an increase in demand and supply of reasonably priced Android mobile phones.

However, growing inclination of consumers toward high-end smartphones is driving the market for iOS, and the segment is expected to expand at a substantial rate over the coming years.

How Crucial is Pricing in the Smartphones Industry?

On the basis of price range, mid-range smartphones ($200-$500) are anticipated to dominate the global market. The market size of mid-range cell phones is expected to expand almost 2X over the forecast period.

There has been a shift in demand where consumers are focused on getting budgeted smartphones. Owing to this, increasing number of companies are launching new smartphones in the mid-range segment, thereby driving segmental growth in this market.

The electronics product manufacturing industry took a major hit during the pandemic, as the world is now experiencing a major shortage in semiconductor components and chips. The pandemic has made it very difficult to cope up with the increase in demand for electronics.

Smartphone shipments witnessed a decline in 2020, mainly due to the impact of COVID-19. Companies manufacturing smartphones were not able to source the required labour for their operations due to travel restrictions, and industries were shut down in China and other developing countries across the globe.

Many key smartphone manufacturers are inclined at investing heavily in innovation, research, and development practices to uncover rising demand for smartphones. With the use of technology, smartphone suppliers are also focusing on quality and customer satisfaction for capturing a larger base.

Market players are focusing on initiatives such as acquisitions, new product launches, and mobile app software updates in order to offer advanced smartphones in the market.

How big is the smartphones market?

What is majorly driving demand for smartphones?

At what CAGR did smartphone sales increase over the past 5 years?

What will be the demand outlook for smartphones through 2031?

What are the key trends shaping mobile phone sales?

Key market trends include adoption of AI technology in smartphones coupled with growing popularity of 5G technology across the globe.

What is the market share of the top 5 manufacturers of smartphones?

Which countries are registering high growth in the Europe smartphones market?

The U.K. and Germany together held almost 45% share of the Europe market in 2021.

Which are the top 5 countries driving most demand for smartphones?

The U.K., U.S., China, Japan, and India are major demand hubs for smartphones.

The global flat panel display market is also projected to bring in more than US$ 177, 300 Million revenue by 2027 end..

In today’s world, due to constant and significant technological advancements, biosensors industry is witnessing substantial growth over the last few years..