Global Market Study on Spices and Herbs: Rising Demand Witnessed for Use in Ready-to-Consume Foods and Beverages

Millennials are looking for high-quality products through their interest in food without compromising on flavor and mouthfeel. Flavoring food products is one of the major trend that the food & beverage industry is witnessing. The younger generation is more fascinated by flavors and cuisines from different regions.

Testing vibrant flavors in their favorite food dishes is what most millennials and gen Z populations are seeking. The flavor imparted by different spices and herbs is increasing their demand, owing to the spicy and savory taste that is been widely accepted by the younger generation.

As such, the global spices and herbs market is set to experience decent growth over the forecast period of 2020 to 2030.

Growing Trend of Incorporating Spices into Ready-to-eat & Ready-to-drink Foods & Beverages: There has been rapid changes in the lifestyles of consumers, along with rise in the working population that has shown a keen inclination toward ready-to-eat and ready-to-drink products.

Convenient food is becoming indispensable in urban kitchens, whilst being great time-savers for consumers with hectic schedules. Spices and herbs are being increasingly used in these convenient foods, owing to their vibrant flavor and several health benefits.

Preference for flavored alcohol such as spiced rum, cannella spirits, fireball, and cinnamon whisky is also rising as spices impart a distinct flavor to alcohol, which bodes well for the growth of the global spices and herbs market.

Changes in Food Habits of Consumers Searching for New Mouthfeel: Consumers are willing to experiment with taste and cuisine from different parts of the world, as the trend for cooking and learning new recipes has renewed.

Spices and herbs are finding their way into the common man’s kitchen, as complementing food with the right spices derives authenticity in the dish. Herbs and spices such as cinnamon, cardamom, garlic, basil, oregano, parsley, and others add a healing punch to meals, along with enhancing the mouthfeel of the consumer by providing a sour and spicy flavor to the food.

A major shift in consumer palates toward less-sweet products and increasing interest in flavor experiences from around the globe are driving the expansion of the spices and herbs market size. 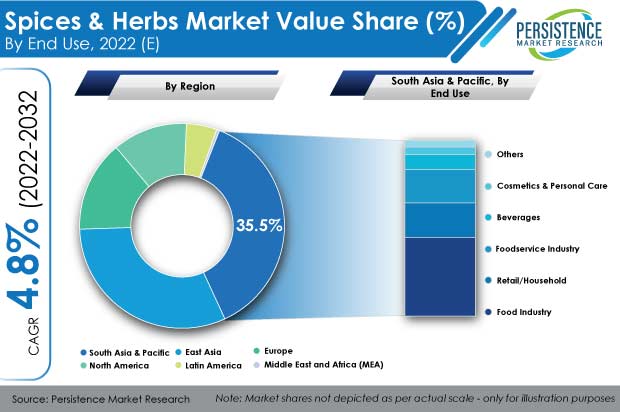 Rising immigrant population from Asia and Mexico to North America and their influence on local food is expected to increase the demand for spices and herbs in the region. The number of Indian, Italian, Mexican, and Chinese restaurants in North America offering ethnic cuisines that are fortified with different ingredients is increasing.

Cumin, cinnamon, paprika, parsley, and pepper are some of the key spices and seasonings that are used in these cuisines. Ready-to-cook spice mixes are also gaining popularity in North America, owing to the busy lifestyle of consumers and rising working women population, who demand convenience.

Rising popularity of ethnic food coupled with easy availability of spices in supermarkets across the region is expected to fuel North America’s spices and herbs market share.

The world is facing an unprecedented threat from the COVID-19 pandemic, with damaging effects on the economy. The spices and herbs industry is also expected to face the aftermath of the pandemic. Production of spices and herbs is labor-intensive, and with social distancing and lockdown norms in place, production has been hampered.

With major producing countries in Asia Pacific such as India and China being severely hit by the pandemic, trade flow has been disrupted. However, with increasing demand for essential food products, rise in home cooking, and governments encouraging the supply of food products with minimal restrictions, the impact of the pandemic will remain low on the spices and herbs market in the near term.

The global spices and herbs market is expected to witness substantial growth over the coming years, owing to the growing quest for dietary supplements, which is anticipated to offer advantageous opportunities during the forecast period of 2020-2030. Major multinational brands are focused on offering spices and herbs to different industries such as pharmaceutical, nutraceuticals, cosmetics, and personal care for increased sales.

Leading market players such as McCormick & Company, Inc., Olam International, Paulig Group, Elite Spices, and others are focusing on channel polarization and innovative product launches, along with expansion of production facilities to meet the increasing demand from consumers. Improvement in quality of spices and herbs with research & development for increased benefits is another strategy being adopted by key players to gain a competitive edge in the global spices and herbs market space.

The study provides a detailed assessment of the key market dynamics and detailed information about the global gourmet salt market structure..