Increasing threats of terrorist attacks (such as mid-air bombings and plane hijacks) over the last few years has increased the focus of security agencies and other high profile establishments, particularly airports, on implementing various security measures. Attacks such as the terror attack at Brussels airport in March 2016, and the suicide bombing at Istanbul Atatürk Airport in June 2016, have changed the threat perception of the airline industry. Various governments across the globe are now focusing on improving existing security set-ups for airports in their respective countries. For instance, the Indian government mandated security audits at all airports in the country in August 2016. In May 2012, the Transportation Security Administration (TSA) mandated 100% cargo screening at all airports in the U.S. The European Commission (EC) regulation for risk-based screening for cargo was implemented in August 2013. These factors are anticipated to have a favorable impact on the explosive detection technologies market over the forecast period of 2019-2029.

Increasing terrorist attacks across the globe, especially in Iran and Syria, has increased terror threat perception, worldwide. Since 2011, there have been seven terrorist attacks across various countries in Europe. More recently, in 2016, terrorist attacks in France on Bastille Day and a separate incident of an attack on a restaurant in Bangladesh are increasing government focus on strengthening counter terrorism infrastructure in their respective countries. This leads to an increasing demand for advanced explosive detection equipment, with an aim to help negate the threat of attacks. Players in the explosive detection technologies market, are hence, focusing on improving their offerings to cater to the rising demand for effective explosive detection equipment.

Manufacturers to Focus on Commercialization of Low-cost Devices

Increasing use of improvised explosive devices has led to the use of chemical explosives rather than metal ones. Trained dogs or physical methods, such as gas chromatography coupled with mass spectrometers, electronic detection systems, and electrochemical approaches, among others, are highly sensitive, selective, and expensive. Development of portable and miniaturized units is expected to reduce the cost of equipment. Thus, developing low-cost devices for detection of chemical explosives in minimum time can offer great opportunities to players in the explosive detection technologies market.

Mass Spectroscopy for Automatic Detection of Explosive Substances to be Profitable 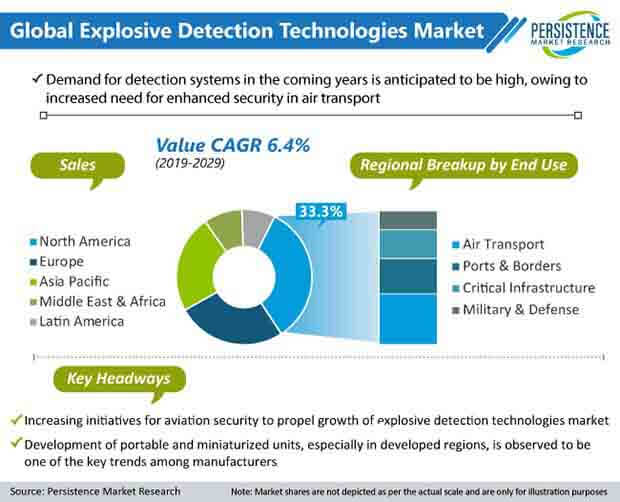 The explosive detection technologies market is growing at a substantial rate, with North America and Asia Pacific accounting for a prominent value share in the global market. The trace detection segment is projected to dominate the global explosive detection technologies market during the forecast period. Growing concerns toward security is expected to be the major factor driving the demand for efficient, reliable, and low-cost equipment over the forecast period.

Key indicators of market growth, such as value chain analysis and supply chain, compounded annual growth rate (CAGR), and year-on-year (Y-o-Y) growth of the market are explained in PMR’s report in a comprehensive manner. This information helps readers understand the quantitative development projections of the explosive detection technologies market over the forecast period.

Comprehensive information acquired from primary resources and secondary resources is validated from companies operating in the explosive detection technologies market to make PMR’s projection on growth prospects of the market more accurate and reliable.