From 2016 to 2020, sales of MEMUs increased at a CAGR of 4.8%, which was significantly impacted by COVID-19 in FY2020. The mining industry has been very volatile in nature, even though the MEMU market witnessed strong growth from 2016.

For instance, mining contractors are expecting to enhance safety, payload capacity, and precision delivery of explosives with increased efficiency in the mobile explosive manufacturing unit market.

Forecasted growth will be partially driven by post-COVID-19 recovery in the initial few years, owing to which, MEMU sales are projected to witness Y-O-Y of 10% on a value basis in 2021. However, the global market will expand at a CAGR of 5.2% through 2031.

What is the Impact of the Underground Mining Equipment Market on Mobile Explosive Manufacturing Unit Demand?

The underground equipment market and mobile explosive manufacturing unit market is closely related, and both are assumed to grow on similar lines over the coming years.

What are the Key Opportunities for MEMU Providers?

Increasing operations of underground mining to explore new minerals are expected to boost mobile explosive manufacturing unit demand growth over the forecast period. According to Orica, real-time tailoring of explosives energy to geology across a blast, delivering improvements coupled with overall reduction in drill and blast costs, are the benefits provided by the above mentioned technology.

In order to better cater to growing demand for explosives from end-use industries such as construction, mining, and quarrying, manufacturers are focusing on strategically expanding their raw material capacities, which is set to provide lucrative opportunities for MEMU providers in the future.

The above-mentioned factors will result in capacity expansions in mining across emerging markets such as Latin America, MEA, and Asia Pacific, which will further uplift MEMU consumption.

What are the Restraints That Mobile Explosive Manufacturing Unit Suppliers Face?

Adverse environmental impact of explosives owing to the release of toxic gases such as carbon dioxide and nitrogen oxide following detonation, and potential hazards associated with the storage of unstable explosives, have driven governments across the world to focus on imposing stringent regulations on the use and storage of explosives. Such restrictions/regulations are expected to act as an impediment to the growth of the global explosives market.

Mobile Manufacturing Units (MMUs) are used in physically demanding applications and face continuous wear and tear during explosive manufacturing and discharging operations, which leads to the high replacement rate of some attachments, which will further raise costs and may hamper MEMU demand growth.

Any drop in operational reliability or sudden failure of equipment can result in significant losses for end users and can cause a cascading effect across the chain of Mobile Processing Units (MPUs) and explosive delivery systems, affecting other processes at mining locations. As such, it exponentially increases operational and overall costs of mobile explosive manufacturing units. 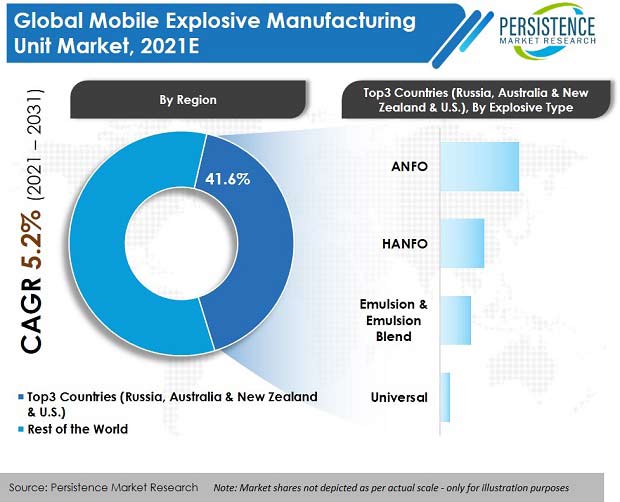 Where Does the U.S. Stand in Global MEMU Market?

The United States held around 77% value share of the North America mobile explosives manufacturing unit market in 2021. During the forecast period, the U.S. is expected to remain one of the prominent countries in the global MEMU market.

Market forecasts for the United States is moderate, as the number of rental service providers is growing, and key MEMU players are also providing rental solutions for small mine operators. Metal mining is growing steadily and will overtake coal mining in the future as demand for precious metals grows across the United States.

What is the Outlook for MEMU Manufacturers in Australia?

According to Persistence Market Research, Australia has been a key country for MEMU sales in the South Asia & Pacific region, and anticipates the country to generate an absolute dollar opportunity worth US$ 28.57 Mn during the forecast period.

Australia's mining industry is one of the key contributors to the country's economy, as it is one of the world's leading exporters of coal, iron ore, bauxite, alumina, and a variety of other minerals.

According to the Australian Government, the mining industry's actual gross value added accounted for almost 9% of Australia's total GDP, making it one of the country's most important economic sectors and providing employment to around 140,000 people.

Why is Russia a Lucrative Market for Mobile Explosive Manufacturing Unit Providers?

Over the forecast period, Russia is expected to remain one of the prominent markets for MEMUs. According to the analysis, Russia accounted for over 58% value share in the European mobile explosive manufacturing unit market in 2021.

Russia remains one of the leading manufacturers of mining commodities around the globe. The country has a huge geographic area rich with mineral resources. According to the United States Geological Survey (USGS), Russia was ranked among the world leading manufacturers of commodities such as bauxite, coal, copper, diamond, gold, iron ore, lead, nickel, PGM, potash, silver, uranium, and others.

Which Production Capacity of MEMU is Most Popular?

MEMUs of 15 to 25 tons accounted for around 45% of the market in 2021, owing to the fact that the production capacity of 15 to 25 tons is popular among end users and sees more demand to operate small- to medium level-mining operations.

Manufacturers are aiming to design and manufacture a wide range of Mobile Explosive Manufacturing Units (MEMUs) for the regional and international mining industry, which is best fitted to their needs

Which Discharge Method Has the Most Potential for Growth in the MEMU Industry?

The auger-based discharge method of MEMU is predicted to account for more than 50% share of the market by the end of 2031. A MEMU with a lorry-mounted crane and a belly sweep auger allows users to load explosive such as ammonium nitrate independently and can charge up to 5 drill holes with explosives.

Which Explosive Leads the MEMU Market?

Ammonium Nitrate Fuel & Oil (ANFO) has been the most popular explosive type used in mobile explosive manufacturing units, and is anticipated to account for more than 45% market value share by the end of forecast period.

The global economy witnessed a sudden drop in FY2020 owing to the COVID-19 pandemic, which left no industrial sector unaffected. Implementation of certain protocols such as social distancing and contactors trying to maintain operations with minimal staff and significantly low demand affected day-to-day operations.

The aforementioned factors had a negative impact on the global mining sector, and since the mining & MEMU markets grow synchronously, it resulted in a drop in mobile explosive manufacturing unit solution sales in FY2020.

The global MEMU market is moderately consolidated with prominent players investing significant amounts in innovation through R&D activates. Key areas of R&D by MEMU manufacturers include payload capacity, precision charging, and delivery rates, among others.

Over the last few years, the market has seen a variety of growth strategies implemented by key MEMU players, including acquisitions, mergers, agreements and partnerships. To increase their revenue share, aftermarket MEMU companies are investing in R&D and new products.

How much is the global MEMU market worth?

The worldwide MEMU industry is currently valued at around US$ 347.8 Mn.

What is the predicted growth rate for mobile explosive manufacturing units from 2021 to 2031?

Which are the most lucrative markets for mobile explosive manufacturing units?

Who are the top 5 mobile explosive manufacturing unit suppliers?

How is demand for mobile explosive manufacturing units shaping up in China?

Demand for MEMU products in China is expected to surge at 5.2% CAGR through 2031.

Which discharge type is most prevalent in the MEMU landscape?

Auger-based discharge MEMUs are anticipated to lead the market through the forecast period.

Global servo press market is projected to expand at a value CAGR of 9.1% along with a healthy revenue throughout the period of assessment 2017-2025. Details inside.