De-aromatic solvents are effective alternatives to conventional solvents such as mineral or white spirits. These de-aromatized hydrocarbon solvents find application across various industries in paints, coatings and inks, metal working fluids, industrial cleaning, adhesives and sealants, drilling fluids, consumer products such as household insecticides, and some other niche applications.

De-aromatic solvents characterized by their lower toxicity, and hence, higher occupational exposure limits and low VOC content, are an ideal alternative to conventional solvents such as chlorinated solvents and mineral turpentine. Paints & coatings account for a prominent share of de-aromatic solvent consumption, followed by metal working.

Industrial growth coupled with increasing preference for de-aromatic solvents due to newly imposed regulations and restrictions pertaining to VOC emissions is expected to drive demand from industries such as metal working, consumer products, and paints & coatings, over the coming years.

Demand for high flash point de-aromatic solvents that are non-corrosive and environmentally safer has witnessed steady growth, especially in metal working applications. This increasing demand is, thus, expected to fuel the growth of the high flash point segment during the forecast period.

With the ongoing crisis caused by the COVID-19 pandemic, manufacturing and supply chain operations have seen a downturn. Demand is anticipated to increase as the economy recovers and the pandemic situation stabilizes. At various stages, the COVID-19 pandemic has had a significant effect on the global economy, and the impact has also been seen on demand for de-aromatic solvents.

Paints and coatings & inks are major end uses of de-aromatic solvents, which have already experienced a downturn in 2020 with decreased construction and industrial activities. COVID-19 further impacted growth of the metal industry, depleting demand for de-aromatic solvents during the pandemic period.

Furthermore, the market was affected by supply chain disruptions, shortage of raw material supply, and government lockdowns and shutdowns, adversely depleting growth. However, Persistence Market Research expects the global de-aromatic solvents market to increase at over 6% CAGR through 2031.

What is the Commercial Potential of De-aromatic Solvents?

In case of paint and coating applications, relatively lower VOC content, less odor, and faster drying times are desirable properties. De-aromatic solvents are characterized by these aforementioned properties, and as a result, consumption of de-aromatized solvents, especially of low flash point grade offerings in this application, is expected to grow rapidly.

Furthermore, there has been an increase in the demand for de-aromatic solvents from household insecticide and mosquito repellent manufacturers, as these solvents are odorless, contain relatively less volatile organic compounds (VOCs), and also have lower toxicity as compared to conventional solvents.

Which Factors are Driving Demand for De-aromatic Solvents?

Traditionally, coils dominated the insecticides market; however, over the past few years, there has been substantial growth in the use of insecticide aerosols/sprays. This can be attributed to numerous factors, such as rising disposable income, higher availability of such products, easy usage, and the health and environmental benefits (aerosols do not produce smoke) associated with these products.

As a result, the market for insecticide and mosquito repellant sprays/aerosols has witnessed robust growth at a CAGR of around 10% over the past few years, which is anticipated to drive demand for de-aromatic solvents over the coming years.

What is the Regulatory Impact on Global Sales?

Over the past few years, regulatory authorities and organizations have framed stringent policies that govern the production and use of chemicals, especially solvents, so as to curb the menace of hazardous Volatile Organic Compounds (VOCs) that are released into the atmosphere. These policies focus on minimizing the use of conventional solvents and encourage the usage of alternatives with lower VOC content. 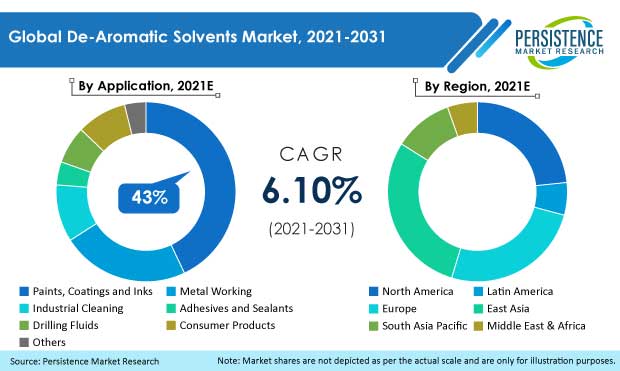 How Large is the Opportunity for De-aromatic Solvent Manufacturers in China?

China is expected to be one of the prominent consumers and producers of de-aromatic solvents, and the market here is anticipated to grow at highest rate over the forecast period. Lower and medium flash point grades are mostly preferred in the country, accounting for a collective share of more than three-fourth of the total market.

Moreover, the country has a strong base for paints, coatings, and inks, along with metal working applications, which is anticipated to create significant opportunities for market players.

Is Demand for De-aromatic Solvents Increasing in India?

Japan is anticipated to show relatively sluggish growth as compared to other regions due to the mature market in the country. Japan has witnessed major demand for medium and high flash point grades from metal working and industrial cleaning applications, as they are odorless, less corrosive, and have faster drying ability, and are therefore used for bearing cleaning and other applications.

Which are the Prominent De-aromatic Solvent Manufacturers in South Korea?

How is Metal Working Influencing the U.S. Market for De-aromatic Solvents?

The U.S. is anticipated to be a prominent market for de-aromatic solvents. The country’s market is dominated by paint, coating & ink, and metal working applications. The U.S. has also shown an increase in consumption of de-aromatized solvents for drilling applications. Medium flash point type will continue to show its dominance throughout the forecast period in the country.

Among the flash point-based segments, medium flash point is estimated to account for nearly half of the market value share. This segment is expected to be followed by low flash point. Increasing demand for greener, eco-friendly alternatives such as powder-coatings and solvent-free coatings is expected to act as an impediment to the growth of low flash point solvents during forecast period.

Consumption of high flash point de-aromatized solvents is expected to be driven by anticipated increase in demand for these solvents from ink and metal working applications during the forecast period.

Which Application of De-aromatic Solvents will be Most Attractive?

Paints, coatings, and inks are anticipated to dominate demand for de-aromatic solvents, followed by metal working. De-aromatic solvents are characterized by their lower toxicity and higher occupational exposure limits and low VOC content, are an ideal alternative to conventional solvents such as chlorinated solvents and mineral turpentine.

Which Boiling Point Segment is Expected to Dominate Demand?

Furthermore, manufacturers are also expanding their production capacity to cater to increasing demand for various applications. They are developing products that have higher flash points, lower toxicity, and are less corrosive in nature. They are focusing on developing relatively higher-value product offerings for applications such as drilling fluids and other tailored applications.

White Spirits Market are of four types - Type 1, Type 2, Type 3, and Type 0, which are categorized on their aromatic content basis. White spirits are consumed in a wide range of applications such as paint thinners, cleaning solvents, degreasing solvents, fuels, and disinfectants, among others..