Conventionally, crude oil based solvents form a key component of paints, coatings and inks. These solvent based paints, coatings and inks, among others, tend to release relatively higher amount of VOCs as compared to some of the other bio-based alternatives. In the recent past, market players have strived to develop eco-friendly or green product offerings that use bio-based raw materials for their synthesis and thus eventually do away with the use of conventional solvents in certain applications. Due to the increasing demand for greener alternatives, the bio-based solvents market is slated to register a steady CAGR of around 6%-8% over the forecast period. In addition, the feedstock for de-aromatized hydrocarbon solvents is naphtha, which is derived from crude oil. Hence, prices of these petroleum based de-aromatized hydrocarbon solvents tend to be volatile as they are influenced by volatility in the prices of crude oil. These factors adversely affect the profitability of manufacturers and in turn may inhibit the growth of the India de-aromatic solvents market.

By application, the paints, coatings and inks segment accounted for a relatively large value share of 43.2% in the India de-aromatic solvents market in 2016, followed by the metal working segment (21.3%). The paints, coatings and inks segment is expected to retain its dominance over the forecast period. The metal working and consumer products segments are expected to register significant CAGRs during the forecast period while the metal working segment is expected to witness relatively faster growth during the assessment period. 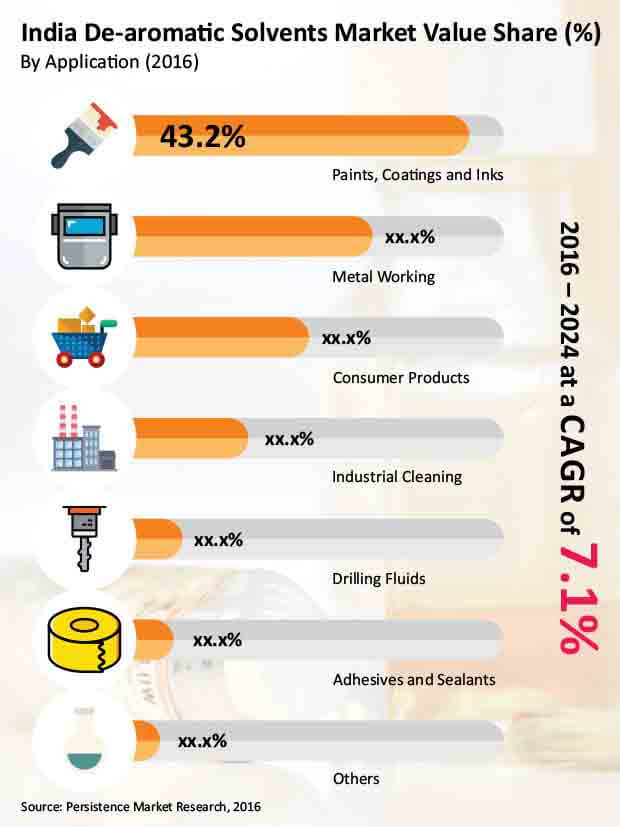 Overall market size has been analyzed through historical data, primary responses, and public domain data. Revenue of companies in the India de-aromatic solvents market has been benchmarked to ascertain the market size for the base year. Macroeconomic indicators such as GDP and industry growth have been considered to forecast the market size over the assessment period. The historical growth trend of end-use industries, market participants’ performance, as well as the present macro-economic outlook has been taken into consideration for estimating the overall market forecast. This data is then validated using the triangulation method and is extensively scrutinized using advanced tools to garner quantitative and qualitative insights into the India de-aromatic solvents market.