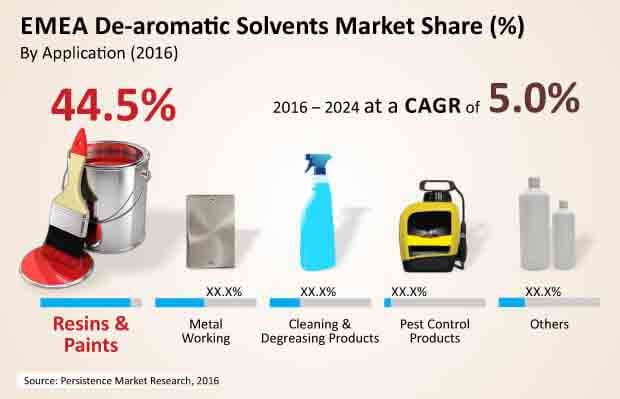 Germany, Italy, France and U.K, collectively are estimated to account for nearly half of the overall EMEA de-aromatic solvents market value in 2016. Consumption of de-aromatic solvents in North African countries is expected to register relatively faster growth during the forecast period. On the other hand, mature markets namely Germany, France and U.K. are expected to register relatively slower growth during the forecast period, partly due to growing adoption and use of alternatives such as bio-based solvents and that of water based alternatives for certain applications.

This Persistence Market Research report titled, “De-aromatic Solvents (<400 ppm aromatics) Market: EMEA Industry Analysis and Forecast, 2016-2024,” examines the EMEA de-aromatic solvents market for the forecast period 2016 - 2024. The primary objective of the report is to identify opportunities in the market and present updates and insights pertaining to various segments of the EMEA de-aromatic solvents market.

The report begins with an overview of the EMEA de-aromatic solvents market , appraising market performance in terms of revenue and volume, followed by an in-depth analysis of key trends, drivers, and restraints witnessed in the EMEA market. Impact analysis of the key growth drivers and restraints based on the weighted average model is also included in the report to equip the client with pertinent decision-making insights.

To understand and assess opportunities in this market, the report is categorically divided into three key sections on the basis of flash point, application, and region. The report analyses the EMEA de-aromatic solvents market in terms of value (US$ Mn) and volume (metric tons).

Segments by grade assessed in the report are:

Applications assessed in the report are:

Regions/Countries assessed in the report are:

To calculate the market size, the report considers various aspects based on secondary research. Furthermore, data points such as regional split and market split by application and qualitative inputs from primary respondents have been incorporated to arrive at appropriate market estimates. The forecast presented in the report assesses the revenue generated by the sales of de-aromatic solvents in the EMEA region. While developing the market forecast, the report begins by sizing the current market, which forms the basis for forecasting how the market is anticipated to take shape in the near future. Given the characteristics of the market, data is triangulated through analysis based on the supply side, demand side, and dynamics of the EMEA de-aromatic solvents market. However, quantifying the market across the above-mentioned segments and regions is more a matter of quantifying expectations and identifying opportunities rather than rationalizing them after the forecast has been completed.

Rules and regulations pertaining to the exposure of chemicals are very stringent particularly in Europe.  Necessary precautions are therefore taken in case of factory workers who come directly in contact with the various solvents. De-aromatic solvents have high exposure levels and are used in various factories as their usage is safer for the workers.