Historically, from 2017-2021, the global market for algal oil registered a compounded annual growth rate (CAGR) of 5.1%.

Strong demand from the pharmaceutical sector will boost the prospects for algal oil suppliers. Consumption of algal oil will increase as the vegan population grows and biofuel production increases. As consumers recognize the necessity to preserve vitals and promote immunity, the product will see significant penetration across the dietary supplements market over the coming years.

Algal oil is used in enhancing vision in people with certain eye conditions as well as lowering cholesterol in the body. Also, algal oil has gained prominence in dietary supplements as it is primarily used as a specialty oil owing to its low saturated fat content.

Key other indirect factors that have fueled the market in recent years have been increasing health awareness, rising preference for nourishing vegetable sources, improvements in the standard of living, growing urban lifestyle, and rising disposable income.

Worldwide consumption of algal oil is expected to rise rapidly at a CAGR of 6.2% over the forecast period of 2022-2032. 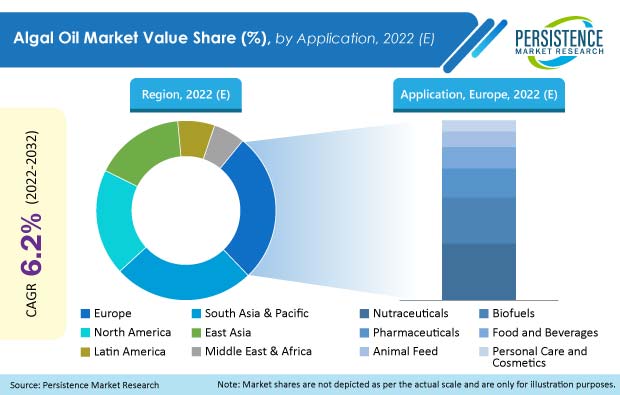 Why are Sales of Algal Oil Rising at a Fast Pace?

Consumers are switching to plant-based diets as a result of the growing awareness about the negative effects of eating animal-based food, which include obesity, increase in bad cholesterol, and other health problems. Algal oil is one of the best substitutes for animal-based ingredients because it has an equivalent level of nutritional value.

Algal oil is preferred over other types of food owing to its ability to lower the risk of conditions such as diabetes, cardiovascular disease, cancer, and other illnesses. Consumers' increased awareness about what they consume is driving the expansion of the market for algae oil.

Algal oil is a good substitute for fish oil and other animal-based goods since it provides nearly the same nutritional value without endangering the environment or the animal lifecycle.

DHA is an omega-3 fatty acid that is necessary for brain development during pregnancy and early childhood. It has been related to enhanced heart health, eyesight, and lower inflammatory responses. This long-chain fatty acid is abundant in cell membranes throughout the body and aids in the transmission of signals between nerves.

DHA algal oil is utilized in a wide range of applications in different markets, including dietary supplements, pet nutrition, and functional foods. It is even added to consumers’ favorite meals to support weight management and sports nutrition. Moreover, this oil is incorporated in several beverages, foods, and supplements.

Consumers today are more health-conscious than they were a decade ago, and they strongly prefer products made of healthy and sustainable ingredients. These consumers authenticate the substances used in the offered food product alternatives. Growing demand for organic food, rising environmental & health consciousness, and increased industry investments in the marketing and production of organic food are all boding well for the expansion of the algal oil market.

Algal oil is one of the most expensive oils when compared to other types of fish oil. Algal oil is extracted from algae using state-of-the-art equipment, and the entire process–from growing the algae to harvesting the oil–is managed by a research and development team to produce better outcomes.

As an essential component in the manufacturing of algal oil, businesses must explore the entire world for high-quality and standardized algae strains. The whole process necessitates a significant financial commitment and a group of specialists with in-depth knowledge of high-quality algae for the production of algal oil, raising the cost of production and acting as a market restraint.

What Region Accounts for High Demand for Algal Oil?

Increasing demand for algal oil in the food & beverage sector in the region is being witnessed to provide support to the immune system and maintain general health. While customers in this region are not well aware of natural ingredient supplement characteristics, the region is seeing a growth in the popularity of algal oil products.

In the East Asian market, Japan is showing promising growth for the forecast period and is expected to register a high CAGR of 6%. The share of Japan in the East Asian algal oil market is around 12.6% and is currently valued at US$ 4.2 Mn.

Why is Demand for Fuel Grade Algal Oil High?

The market value share of the fuel-grade segment is 58.3% in 2022, which is projected to be valued at US$ 42.7 Mn by the end of the forecast period in the global market.

Which Applications of Algal Oil are Bringing in Higher Revenue Generating Opportunities?

Based on application, the global algal oil market is segmented into food and beverages, personal care and cosmetics, pharmaceuticals, animal feed, nutraceuticals, and biofuels.

The nutraceuticals segment holds a major value share in the global market at 31.7% in 2022. The current market value of the segment is US$ 42.2 Mn.

Companies engaged in the production and supply of algal oil are adopting product development and facility expansions as key strategies to create more space for themselves in the market. They are offering products with various certifications for consumers to choose from according to their preferences.

The global algal oil market is currently valued at US$ 133.4 Mn.

The U.K. accounts for the largest market share of nearly 30% in the European market.

The U.K., France, Indonesia, U.S., and China are major consumers of algal oil.