Preterm newborns are more susceptible to various complications such as hypothermia due to heat loss, reduced fat and glycogen. According to the World Health Organization (WHO), ever year, around 15 million babies are born early, among which, around 1 million deaths occur due to preterm complications. Monitoring neonates is one of the most difficult tasks. Introducing various advanced neonatal infant care equipment has remained key to manage complications associated with neonatal health. Manufacturers are highly investing to meet the rising demand for neonatal infant care equipment, especially thermoregulation devices. Advancements and growing awareness about pregnancy complications and maternal-neonatal health have raised the need for better neonatal care.

In its latest edition, Persistence Market Research offers insights about key factors driving demand for neonatal care equipment. After the unprecedented events of 2020, it has become important to capture the impact of COVID-19 and recalibrate our findings with the actual market scenario. The report tracks global sales of neonatal infant care equipment in over 20+ high-growth markets, along with an analysis of the impact COVID-19 had on the medical device industry in general, and neonatal infant care equipment space in particular.

Rising prevalence of hypothermia preterm births represent a major health concern, and have been reported by the World Health Organization as one of the leading causes of mortality and morbidity in neonates. Common causes of preterm birth include infections, chronic conditions such as high blood pressure and diabetes, and multiple pregnancies; however, often no cause is identified. There could also be a genetic influence. A better understanding of the causes and mechanisms will advance the development of solutions to prevent preterm birth. Thus, growing preterm births and increasing concerns for their survival have surged demand for neonatal infant care equipment to manage the complications associated with preterm births.

For instance, according to the Oxford Academic Journal study, from August 2018 to March 2019, among 1,120 enrolled neonates, around 74%-77% were suffering from hypothermia after birth.

According to the Persistence Market Research analysis, the global neonatal infant care equipment market is expected to expand at 6.5% CAGR through 2030.

How has COVID19 impacted the sales of neonatal infant care equipment?

According to the ADC Fetal & Neonatal Journal study, it was observed that, there were significant reductions in neonatal intensive care unit (NICU) admissions and neonatal resuscitations during the COVID-19 outbreak. Preterm births before 34 gestational weeks along with decrease in intensive neonatal care volume exhibited significant reduction, which, in turn, had a significant impact on the sales of neonatal infant care equipment. Along, with reduction in NICU admissions, disruption in the supply chain and lack of resources also significantly impacted the market. Government as well as manufacturer support to tackle the pandemic outbreak has had a great contribution in fighting the COVID 19 crisis.

For instance, in July 2020, Nihon Kohden Corporation collaborated with TPS (Toyota Product System) Support Team to accelerate its production of ventilators and patient monitors to meet increased demand due to the COVID-19 outbreak, based on the request from the Japanese government

What is the future demand scenario for neonatal infant care equipment?

However, studies to innovate advanced technologies along with improvements in older equipment technology would offer lucrative opportunities for neonatal infant care equipment manufacturers across various geographies. All these factors are expected to create increased opportunities for the expansion of the neonatal infant care equipment market size over the forecast period of 2020 to 2030.

What are the factors driving the sales of neonatal infant care equipment?

Why is R&D key to market consolidation?

With companies around the world increasingly focusing on research initiatives, expansion is on the card. Monitoring neonates is one of the difficult tasks that can raise complications during their transportability, temperature maintenance, or due to positioning, due to external disturbances. Research efforts to develop advanced technological devices have remained important for manufacturers. For instance, Natus Medical Incorporated developed an automated brain monitoring system that would help detect seizures in neonates, and monitor them in a very short time. “Cerebral Function Monitoring (CFM) Olympic Brainz Monitor” is a commercially available touchscreen, automated brain monitoring system that allows real-time cerebral function monitoring with feasibility to be transported across locations. 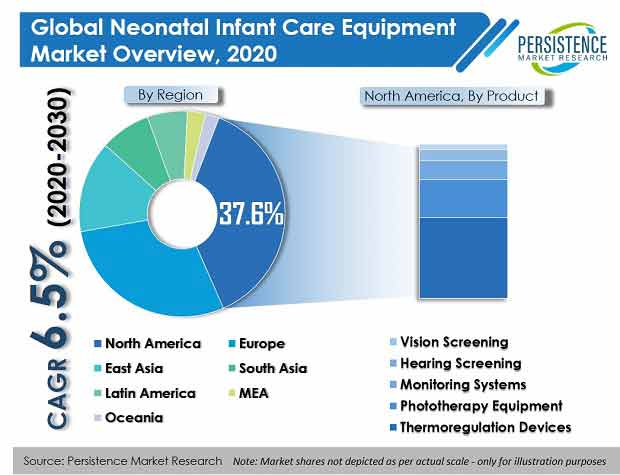 How big is the opportunity in the U.S.?

Persistence Market Research has projected North America to remain as one of the most lucrative markets throughout the forecast period, with the U.S. leading the region. High healthcare spending is one of the key factors supporting the expansion of the market in the region. According to preliminary forecasts by the Centre of Medicare and Medical Services (CMS) Office of the Actuary, overall healthcare spending in the United States is expected to increase by 5.4% between 2019 and 2028, outpacing the country’s GDP by 4.3%.

The U.S. remains one of the largest markets for neonatal infant care equipment, globally, and is expected to generate high revenue over the coming years. For instance, according to Select USA, the medical devices market in the U.S. accounted for 40% of the global market in 2017, and is expected to reach US$ 203 billion by 2023. Moreover, as per CMS, retail spending for durable medical equipment mounted to US$ 54.4 billion in 2017. It is anticipated to increase over the coming years, which is indicative of remarkable scope for expansion, and offers lucrative opportunities to neonatal infant care equipment manufacturers.

Favorable healthcare policies coupled with high per capita healthcare spending have created a conducive environment for the adoption of neonatal infant care equipment in the U.S. Also, the presence of leading players such as GE Healthcare, Becton, Dickinson and Company, Natus Medical Inc. are contributing to market growth in the country. Strategies undertaken by these companies include product launches and expansions, which will continue aiding overall expansion in the U.S.

What sales opportunities will the U.K. offer?

Adoption of neonatal infant care equipment is expected to rise considerably across hospitals and healthcare facilities in the U.K. According to Persistence Market Research  analysis, Europe is identified as the second-leading market, a position it is likely to hold on to through the forecast period.

According to the National Institute for Health and Care Excellence Statistics, preterm birth is the major cause of neonatal mortality and morbidity in the U.K. Preterm babies require special attention and care in an NICU, owing to which, demand for neonatal devices is increasing, which is expected to act as a key driving force for the U.K. neonatal infant care equipment market. Increasing government support is also aiding market growth in the country. Inspiration Healthcare Group plc announced a supply of vital ventilators to NHS, which have been delivered to Thales through the U.K. government; the company is aiming to expand its product portfolio in other regions and generate high revenue through this deal that was carried out in May 2020.

How is innovation driving the German medical devices market?

As per the Federal Statistical Office, healthcare spending in Germany accounted for 11.7% of the GDP in 2018, which increased by 4% from 2017. Furthermore, the country’s health expenditure was expected to account around 407.4 billion Euros by 2019, offering lucrative opportunities for the expansion of neonatal infant care equipment manufacturers in the country.

Also, the presence of leading companies such as Drägerwerk AG & Co. KGaA. has been contributing to expansion in Germany. The company introduced a number of new products, including the ICU ventilators and anesthesia workstations at the Arab Health 2020 held in Dubai, UAE. Besides this, the company has been actively investing to strengthen its product portfolio and expand its sales footprints, worldwide. Growth strategies adopted by such companies are expected to aid market expansion in Germany.

Since 2009, health insurance has been made mandatory for all citizens of the country. According to NCBI, around 70 million people, roughly around 85% of the population, are covered by statutory health insurance, while another 11% of the German population has adopted substitutive private health insurance.

According to the Persistence Market Research report, India generated the highest revenue share among other countries in South Asia, and will lead the South Asian market over the coming years.

Thermoregulation devices, including radiant warmers, neonatal incubators, and neonatal cooling systems are most widely used. According to the report, the thermoregulation devices segment is expected to hold half of the share of the global market over the forecast period (2020-2030). Maintaining a neutral thermal environment (NTE) and preventing heat loss for neonates and infants is a crucial role. Neonates suffering from persistent cold stress or hypothermia need a thermostable environment to maintain body temperature. Thus, rising incidence of hypothermia has surged demand for thermoregulation devices. As per WHO, hypothermia is recognized as a significant contributor to neonatal morbidity and mortality for all newborn infants.

Furthermore, increasing healthcare spending in emerging economies is expected to offer opportunities for emerging manufacturers. Major manufacturers and emerging players of neonatal equipment are shifting focus toward developing countries such as China, India, South Africa, and others. Increasing healthcare infrastructure and high birth rates in these emerging economies would provide better opportunities to manufacturers and marketers. African countries have a major premature newborn population, where such preterm births are at their peak.

For instance, in June 2020, Inspiration Healthcare Group plc acquired SLE, a provider of ventilator products based in Cryodon. This acquisition aims to increase revenue and optimize the company’s manufacturing capability, to allow it to expand its distribution network in the Middle East and Asia Pacific.

Meanwhile, in February 2019, Phoenix launched a new infant care phototherapy product “Nymphaea”, a portable device suitable for preterm babies, and used in conjunction with any warmer, bassinet, and incubator.

Q1. What are the emerging trends in the global neonatal infant care equipment market?

Radiant warmers have gained popularity and account for the highest share in the neonatal infant care equipment landscape, owing to advancements and comfort aspect for neonates.

Hospitals accounted for the highest share in the global neonatal equipment market, due to the presence of latest and technologically-advanced equipment to improve patient care and availability of highly skilled professionals.

Q4. What are the restraining factors for the market?