A new report by Persistence Market Research details the trends and opportunities for manufacturers of handheld marijuana medical vaporizers. The report tracks sales in 20+ high-growth markets, with North America leading the way by far. It also details the impact that COVID-19 has had on this market, and what the years ahead will offer.

Over the past 5 years, the global handheld marijuana medical vaporizer market expanded at a CAGR of 16.7%, which is impressive in itself. The years ahead are expected to offer even more opportunities to market players. With increasing demand, strategic partnerships are taking place between market players.

Major players are acquiring pharmaceutical companies to facilitate easy importation of THCF and CBD concentrates to produce cannabis oil, which can act as a helpful resource in various medicinal applications. Therefore, obtaining licenses through pharmaceutical companies serves as an inexpensive and easy way for market players to make, store, and distribute cannabis.

Moreover, legalization of marijuana in the health sector and rising consumption of marijuana in small amounts to treat medical conditions are driving demand for handheld marijuana medical vaporizers. Further, integration of smartphones in cannabis temperature control is boosting global market growth. Overall, the market is slated to surge ahead at an impressive CAGR of close to 22% from 2021 to 2031.

How is Integration of Smartphones in Controlling Cannabis Temperature Boosting Market Growth?

Apart from that, a digital temperature control option allows for an automatic setting of temperature according to the user’s needs and requirements. Premium temperature-controlled vaporizers allow users to track the temperature, amount of dosage, and other advanced monitoring features, which has become appealing to users in recent years. 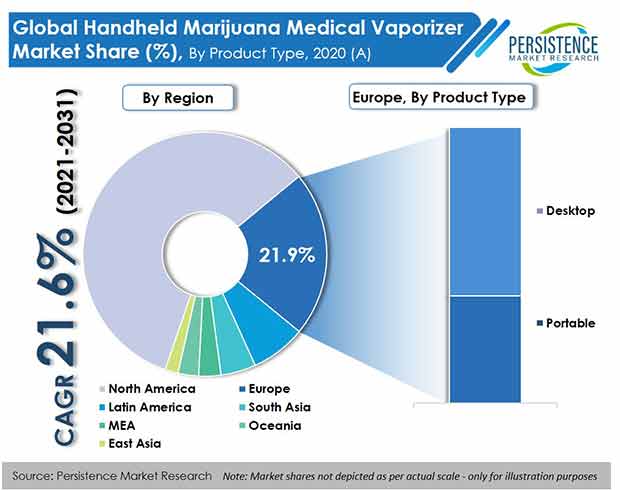 Different manufacturers are producing technologically advanced vaporizers. They are creating mobile applications to control vaporizers. Users can control the temperature of the vaporizer, the battery level can be checked through the software application, and consumption levels and alarms can be set through the app by connectivity through Bluetooth. DaVinci, and Ghost.

More people have turned to the world of vaping as an alternative to smoking cigarettes, not just because it’s safer, but also because of cutting-edge products. Modern vaping tech now creates the smoothest vaping experience with enhancements such as Bluetooth, voice activation, and better batteries.

How is Introduction of Innovative Products with Improved Designs Boosting Sales?

On-demand vaporizers are also manufactured, which only heat up while inhaling. Various flavoring agents and fixed temperatures are provided by manufacturer, which are leading to a rise in demand for vaporizers.

Will Strategic Partnerships Between Organizations Lead to Market Expansion?

A rising trend in the market is that players are partnering other pharmaceutical companies to acquire the necessary facilities, licensing, and permissions to import raw materials and manufacture medicinal cannabis products. These acquisitions work as a cost-efficient and easy method to manufacture and distribute cannabis products, which has boosted the use of handheld marijuana medical vaporizers.

In 2018, KandyPens Inc. entered into a strategic partnership with Amber Rose. The partnership was aimed at developing a new product line targeting luxury and female smokers.

How Will Increase in Number of Dedicated E-Cigarette Retail Outlets Boost Sales?

Globally, awareness about health concerns due to smoking has been increasing. This has resulted in the development of alternatives that help consumers quit traditional cigarettes. Cancer caused by smoking is one of the major global concerns affecting people.

E-cigarettes eliminate the risk of cancer and prevent the intake of more than 4,000 chemicals that are produced by the burning of tobacco cigarettes. Based on product, the e-cigarette market has been broadly categorized into cig-a-like, vaporizers, and vape mods.

How is Legalization of Cannabis in Various Countries Creating an Opportunity for Market Players?

With rising awareness about the benefits of cannabis, many countries have legalized cannabis use as a sedative and for recreational purposes. For instance, Luxembourg, Germany, the Netherlands, Malta, Switzerland, Spain, France, and the U.K. are some of the European countries that have legalized the use of cannabis.

Commercial cannabis production and sale is also legal in European countries. Such factors are further expected to drive market growth.

Retailers across Europe have seen a latest trend of switching of marijuana consumers from the pot-based smoking method to pot-infused foods known as edibles and vaporizer cartridges. Desire for stronger and healthier marijuana has pushed consumers for new ways to consume marijuana.

In the Netherlands, smokable marijuana, which is known as ‘flower’, accounted for almost 67 percent of all sales at pot shops in 2014. After several years, sales dropped and in 2018 accounted for 44 percent, while sales of potent concentrates such as ‘honey’ or ‘butter’ doubled and reached 31 percent.

How is Growing Usage of Vaporizers among Medical Patients Shaping Market Growth?

Use of cannabis for medicinal purposes is not new. It started in China and then spread to rest of the world. THC and CBD are the main two compounds found in cannabis, which is used to reduce nausea and increases appetite. It also helps in muscle-control problems. It is also used to treat addictions and mental illness.

Dronabinol and Nabilone are two synthetic drugs approved by the US FDA.13 They are used to treat nausea and vomiting in patients for anti-emetic treatment purposes. Medical marijuana vaporizers are also used for patients as a treatment. In this case, patients use low heat to turn the active compounds into a vapor. Growing usage of marijuana vaporizers among patients is further contributing to market growth.

The challenging factor for marijuana vaporizers is strict rules and regulations of marijuana usage in various countries. There are some countries where marijuana is treated as illegal, which includes Albania, Bahrain, Bahamas, Central African Republic, Indonesia, Hong Kong, and Hungary, to name a few.

Also, there are many other countries that have only legalized medical marijuana use, but not for recreational purposes. Though Canada has legalized this, it has some restrictions - maximum 30 gram possession in public places. China and Japan have already imposed strict rules against marijuana smoking.

Such bans against smoking marijuana for recreational purpose will definitely hamper the marijuana vaporizers market, as it directly depends upon marijuana consumption.

How the Presence of Risk in Vaping Marijuana Hampering Overall Demand?

Health issues such as deterioration of eyesight, damage on brain cells, lung issues, etc., are risks associated with vaping, and are restraining the vaporizer industry from expanding to the full potential.

Vaporizers release dangerous chemicals such as toxic amounts of ammonia residue that can negatively affect human health. Vaping marijuana can cause several problems such as breathing issues, cancer, intoxication, dependence, and brain issues.

What Makes Canada a Prominent Player in the Handheld Marijuana Medical Vaporizer Market?

Canada’s legal marijuana market size was valued at US$ 194.7 million in 2020, and is expected to expand at a compound annual growth rate (CAGR) of 19.5% from 2021 to 2031. Growing acceptance and adoption of legal marijuana for the treatment of chronic diseases such as cancer, arthritis, and Alzheimer’s, as well as neurological problems such as depression, anxiety, and epilepsy, is a key factor driving the market.

Legalization of medical cannabis to curb the black market and provide easy access to patients is also expected to spur market growth. Moreover, government earnings through taxation are viewed as an opportunity for the market to earn higher revenues.

Why are Opportunities Abound in the U.S. for Handheld Marijuana Medical Vaporizer Manufacturers?

The U.S. is anticipated to be the fastest-growing country in this market over the coming years. This is majorly attributed to high product adoption and utilization owing to government approvals. As of 2018, the use of marijuana was legal in 30 states and the territories of Puerto, Guam, and the District of Columbia. California was the first state to legalize the use of marijuana for medical use.

Later, other states followed in approving the use of legal marijuana for medical purposes, owing to its high demand amongst patients.

Presently, nearly 57% adults in America are in favor of the use of legal marijuana for medical purposes. A decade ago, only 32% favoured this legalization, and 60% opposed its use. Hence, increasing support of U.S. citizens regarding the use of medical cannabis will fuel market growth during the forecast period. Increasing investments in R&D are likely to expand application further in the medical field.

How is Legalization of Marijuana Creating Jobs and Opportunities in Germany?

Germany is predicted to play a leading role in the European market during the forecast years. Cannabis is gaining momentum across Germany with the legalization of its usage. The legalization of marijuana has led to an increase in demand for marijuana fields; cultivators and manufacturers are focusing more on producing and manufacturing marijuana products in Germany. Also, in 2017, Germany made stringent regulations on the use of cannabis products.

Could Argentina Be the Next Hotspot for the Cannabis Industry?

The market is expected to grow by double digits in the future in terms of the growing population, revenue, changing consumer spending, changing lifestyles, and urbanization in various provinces in Argentina. Moreover, Argentina’s production costs are lower than North America, primarily because of lower wages for workers.

These lower costs are expected to attract more investors to the country, especially considering that stocks are dropping for cannabis investors elsewhere. Another advantage for Argentina is the tropical climate, which provides 12 hours of daylight and lots of rainfall to grow abundant crops.

Desktop or Portable Vaporizers - Which One is Better?

Rising awareness regarding the benefits of portable devices, such as increased mobility, is also attributed to the surging adoption of portable vaporizers in hospitals and other healthcare areas.

Which Sales Channel will be Most Lucrative in Future?

Persistence Market Research has profiled the following prominent manufacturers in its report:

Players operating in the market are finding new ways to cut operating costs. These measures and efforts are being undertaken due to rising input costs and retailer power. Well-established firms are taking a hard look at their operational chains and examining them from both, output and input perspectives.

In light of this, forging new strategic relations with essential players or suppliers to achieve new levels of efficiency is likely to help players cut down operating costs.

The increasing popularity of tube or tubular shaped resistance bands that come with handles and can mimic various fitness machines is expected to boost the growth of the home fitness equipment market.

Global face mask is slated to expand 2.5X and reach a valuation of around US$ 10 Bn by 2031, with clay mask demand remaining high. .

Key insights offered in the makeup remover products market report answer some of the most salient questions that assist stakeholders in gauging all emerging possibilities.

Global shavers market is poised to expand at a healthy CAGR of close to 7% over the next ten years, and cross a valuation of US$ 50 Bn in 2031..