According to Persistence Market Research, by indication, stomach cancer accounted for a market value of US$ 199.1 Mn in 2021, while hospitals held 44.8% share of the global market.

Endoscopic submucosal dissection held an approximate share of 7.9% of the global endoscopy device market in 2021.

The global market for endoscopic submucosal dissection expanded at a CAGR of 6.6% over the historical period (2014-2021).

Increased use of endoscopic procedures for the detection and treatment of colorectal and gastrointestinal diseases has emerged from the rising prevalence of such diseases.

During the projected period, the incidence rate is expected to increase, resulting in a larger patient pool, thus promoting demand for endoscopic submucosal dissection systems.

Although endoscopic submucosal dissection treatments are comparatively rare in nations such as the United States, Brazil, Australia, and Germany, they are becoming more common with gradual adoption in these regions. Growing demand for minimally-invasive procedures by patients and healthcare professionals provides an opportunity for healthcare authorities in these areas to understand more about techniques such as endoscopic submucosal dissection.

Endoscopic submucosal dissection (ESD) is a minimally-invasive endoscopic/surgical method for the curative removal of advanced lesions, such as early GI cancer. If it's successful, it can eliminate the need for resection surgery (laparoscopic or open).

In the endoscopic medical device sector, the FDA 510(k) premarket approval process is used. According to the FDA's published list of class II (special control) devices, devices that were formerly subject to certain constraints are now free from premarket notice under the Modernization Act) in the United States.

This reduces the time it takes for regulatory approval, decreasing costs, and, in the long term, will propel the endoscope and endoscopic submucosal dissection markets forward.

The global endoscopic submucosal dissection products market is predicted to surge ahead at a CAGR of 7.2% with sales revenue reaching US$ 532.6 Mn by the end of 2032. 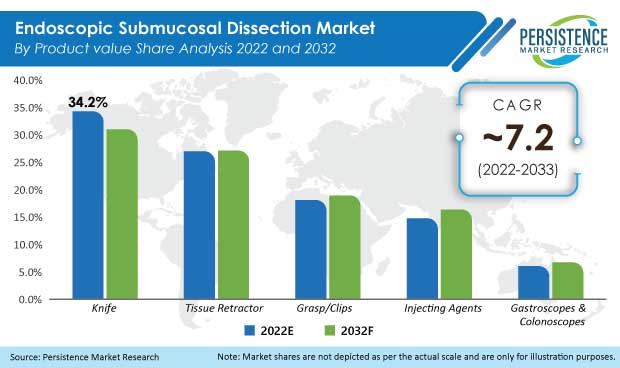 ESD is a technique for treating superficial gastrointestinal neoplasms that allow for en bloc excision, regardless of the size of the tumor. ESD is technically challenging; because endoscopists, unlike surgeons, cannot reach into the gastrointestinal tract with their hands, it's challenging to get enough tension in the dissection plane while maintaining a good field of vision.

In comparison to endoscopic mucosal resection, ESD is associated with a longer procedure time and a high risk of adverse effects. During the ESD technique, traction mechanisms have been established to provide sufficient tension for the dissection plane and a good field of vision. Traction modalities include hood traction, natural traction, and device-assisted traction, with internal and external traction methods.

This factor is set to promote demand growth of endoscopic submucosal resection owing to the increasing adoption of ESD procedures to evaluate accurate histopathology, growing incidence of colorectal cancer, and advancements in AI-incorporated, minimally-invasive endoscopic systems.

What’s Restraining Demand for Endoscopic Submucosal Dissection to Some Extent?

“Dearth of Skilled Professionals in the Field”

For providers to obtain expertise in ESD, specialized technical skills and dedicated training are required. After several investigations, more than 30 supervised gastric ESD procedures are required to develop technical proficiency and prevent complications.

Several training algorithms have been developed in Japan to standardize ESD training. These methods, however, cannot be directly implemented in Western countries due to major discrepancies in the availability of highly qualified mentors, type of pathology identified, tools employed, and trainee experience.

Thus, the need for highly skilled professionals for performing ESD procedures is high and acts as a restraint to the growth of the overall market.

Moreover, apart from stringent patient selection guidelines, several alternative treatment options such as open surgery and endoscopic mucosal resection that are available may offer resistance to the growth of the endoscopic submucosal dissection market.

Why are Endoscopic Submucosal Dissection Providers Targeting the U.S. Market?

“Growing Education & Practice of ESD in the Country”

ESD is a well-established endoscopic method that originated in Japan and has been taken up in the West, where it is now actively practiced. NCCN guidelines for the treatment of superficial GI cancers now include the use of this novel method.

Some insurers have begun preapproving and covering members who may benefit from ESD. The current high level of interest and investment in ESD by medical device manufacturers, clinical investigators, and practicing clinicians suggests that the field and discipline of ESD are poised to make tremendous progress in the next years, particularly in the United States.

How is Demand for Endoscopic Submucosal Dissection Shaping Up in Germany?

In terms of value, at the end of 2021, Germany accounted for 20.4% of the European endoscopic submucosal dissection market.

There is a dearth of established studies from Western regions that report on the influence of the ESD caseload per year on patient outcomes.

The German endoscopic submucosal resection registry was established to observe and evaluate the cost-effectiveness of ESD treatments, their technical success, curative resection rates, and long-term results within the country. This showed implications for the lower occurrence of complications associated with ESD procedures in the country, thereby calling for more adoption of ESD in Germany.

Why is Japan a Prominent Market for Endoscopic Submucosal Dissection?

In 2021, the Japan endoscopic submucosal dissection market was valued at US$ 67 Mn and held a market share of 47.8% in East Asia.

East Asia accounts for the highest number of endoscopic submucosal dissection procedures. This is mostly owing to Japan's and South Korea's high rates of stomach cancer. Japan is also noted for being the center for ESD training.

The method is still in its early stages of adoption in Western regions. Another reason for its present poor popularity is the considerably lower occurrence of stomach cancer in these areas. This picture is likely to change, as ESD adoption is predicted to increase over the coming years.

Knives, among all the products, accounted for the highest market share of 34.3% by revenue in 2021.

With the growing adoption of endoscopic submucosal dissection procedures in the Western world, to mitigate the issues related to complications associated with ESD procedures, there have been advancements in the product range for ESD.

With knives as the dominant segment in the global market, the development of scissor-like knives displayed higher efficiency during surgical procedures, with lesser time taken, and has thus presented positive outcomes for novice providers.

Which Indication is Most Common in the Endoscopic Submucosal Dissection Market Space?

High prevalence of stomach cancer is driving demand in this market and accounted for 81% market share in 2021, owing to endoscopic submucosal dissection being accepted as a standard treatment for early gastric cancer (EGC), in Japan, in 2014.

This is due to the rapid adoption of ESD procedures in Japan, China, South Korea, and other Asian countries, and is now also being adopted in a number of Western countries.

Manufacturers of endoscopic submucosal dissection devices are concentrating on expanding their product ranges by introducing new innovative products. Key players are working on getting new products approved by regulatory agencies and launching them in the market as soon as possible.

Some manufacturers are also concentrating on the development of training centers to boost their product sales and market share, globally.

Similarly, recent developments related to companies manufacturing endoscopic submucosal dissection systems and devices have been tracked by the team at Persistence Market Research, which are available in the full report.

What is the global endoscopic submucosal dissection market size?

What is the sales forecast for ESD products through 2032?

At what rate did demand for endoscopic submucosal dissection increase over the past 5 years?

Who are the key players in the ESD industry?

Japan, China, India, the U.S., and South Korea account for the most demand for ESD products.

What is the U.S. market outlook for endoscopic submucosal dissection?

The U.S. accounts for 91.7% of the North American ESD market share.

Which countries are key producers of endoscopic submucosal dissection products?

How are China and India faring in this market?

Pancreatic and Biliary Stents Market is estimated to account for over US$ 460 Million in terms of value by the end of 2029..

Global demand for transseptal access systems is set to experience significant growth at 9.4% CAGR through 2031, with the market value around US$ 845 Mn at present. As per Persistence Market Research’s projections, transseptal access sheath hold a substantial share of around 86% in the overall market..