Compared to other parts of transport systems, safety levels in bridges are expected to be higher as the failure of a bridge could have severe consequences on human lives and infrastructure. Owing to modern technological capabilities, data of bridges’ health can be obtained remotely, with real-time assessment of the bridge condition.

Bridge monitoring solutions accurately locate, detect, and alert operators regarding structural health issues while bridges remain in use, detecting faults, cracks, and corrosion before they lead to a larger issue. Traditional visual bridge inspection techniques are expensive as well as time-consuming, and any internal damage may go unnoticed. Whereas, bridge health monitoring systems immediately report frequency of damage, type, and location, allowing rapid action to be taken.

Persistence Market Research’s new study covers comprehensive insights about market trends, value (US$ Mn) and volume (‘000 units) projections, recent developments, and dynamics in the market for bridge monitoring systems for the forecast period of 2021-2031. The report tracks global value of bridge monitoring systems in 20+ high-growth markets, along with analyzing the impact COVID-19 has had on the overall construction industry.

Governments of various countries are continuously making investments to improve civil and engineering infrastructure. This is expected to create potential growth opportunities for bridge monitoring system manufacturers to facilitate the maintenance and reduction in the cost of bridges.

Over the past few years, construction industries worldwide have experienced a slow transition toward automation and digitization of their key processes such as repair and maintenance. During the COVID pandemic, the need to work with limited capacity and execute contracts under conditions of social distancing have resulted in loss of time and money.

This has majorly hindered the productivity of workers at construction sites. Thus, the trend of standardization and automation of key practices along with remote working solutions is growing.

Automation and standardization of repair and maintenance of infrastructure through the use of smart sensors and digitization will allow solutions to be more resilient and adaptive during uncertain times such as the COVID-19 pandemic.

Thus, this gradual rise is expected to boost civil infrastructure developments in countries such as the U.S, U.K, Germany, France, China, India, and others, which could leave a transformational impact on the demand for bridge monitoring systems.

Which Technologies are Anticipated to Aid in Streamlining Bridge Inspection Operations?

Advanced and improved technologies such as image processing and data analytics are expected to provide beneficial opportunities for bridge monitoring solution providers. Government administrative authorities are gradually becoming hesitant in using traditional bridge monitoring systems due to heavy reliance on human expertise, which makes them prone to human error.

Moreover, with advancements in sensor technology, real-time bridge monitoring systemsarebeing developed that mostly eliminate the need for manual inspection. Bridge monitoring solution suppliers that provide instinctive software with the hardware will have an advantage. As most users tend to outsource bridge monitoring and inspection activities to service providers or system integrators, modernization in service will be the key driving factor market players.

How are Infrastructural Advancements Expected to Create New Growth Prospects for Market Players?

The bridge construction market is estimated to witness a major boom over the coming years at a global level. Today, bridge development, maintenance, inspection, and utility installation fields are changing at a faster pace rate. New equipment and procedures have made it easier to get work done, build more efficient, inspiring, and beautiful bridge structures, and install utilities on bridges more effectively.

In addition, with the ultimate intention of driving economic output, the U.K. government has placed the development of critical infrastructure at the forefront of recent policy. A rising level of public investments in the development of critical infrastructure has created a number of supply chain partner contracts for those in the bridge and tunnel construction industry to compete for tenders.

Which Factors are Affecting Adoption of Bridge Monitoring Systems?

Almost every infrastructure project specifies a unique set of critical parameters. The designer or operator must identify those parameters and accordingly select tools to measure them. In order to ensure smooth installation and functioning of bridge monitoring systems, skilled personnel are necessary to make decisions pertaining to the process of bridge monitoring, depending on specifications, instrument type, range, precision of measurement, and resolution.

In some cases, monitoring one parameter is enough, whereas, in complex cases, correlation between them is of utmost importance in order to monitor various parameters. Hence, skilled personnel are required. In addition, information required during construction and post-construction phases also vary depending on the structure. Thus, high labor costs and shortage of skilled personnel in Europe and the Americas are expected to be major challenges for providers of bridge monitoring systems. 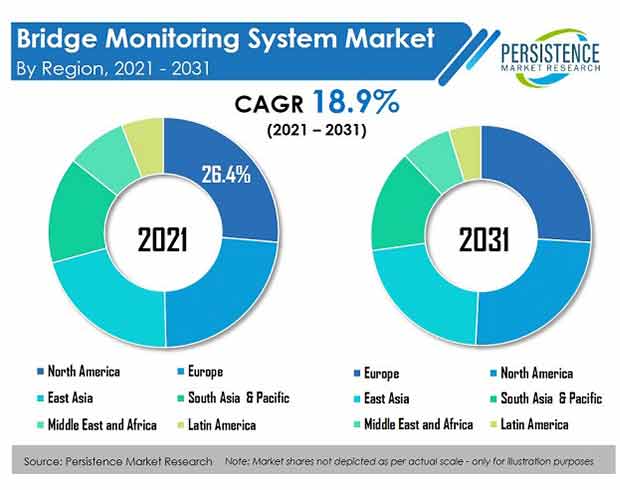 How is Increasing Urbanization in Europe Surging Demand for Bridge Monitoring Systems?

Europe ranked third in terms of degree of urbanization. It is projected that the global share of people living in urban areas is likely to increase to 70 percent in 2050, compared to 56 percent in 2020.

Although, the speed and scale of urbanization bring challenges, including meeting accelerated demand for affordable housing, well-connected transport systems, other infrastructure, basic services, as well as jobs, particularly for the nearly 1 billion urban poor who live in informal settlements, which are estimated to create significant growth opportunities.

Many countries are building bridges each year, and unfortunately, maintenance of these bridges are ignored. The Indian government is showing powerful focus on national infrastructure. Nowadays, it is very crucial to have a bridge monitoring system to monitor the health of road bridges and railway bridges.

These devices will sense cracks inside a bridge and a notification might be given to the authority to stop transport. Rising concerns for safety of bridges are likely to increase adoption of integrated bridge monitoring systems.

As the number of technically advanced bridges is increasing at a global level, continuous monitoring of bridges helps engineers in validating the design prediction of structural response to external loads. Additionally, assessment of bridges' health has become a relevant part of the maintenance paradigm, especially in those countries where many structures are over 50 years old or are rated in poor condition.

The United States is one of those countries where, with more than 600,000 highway bridges, 46.4% of which rated as fair and 7.6% rated in poor condition, installation of reliable bridge health monitoring systems is strategically necessary to optimize the overhauling and rehabilitation costs and also reduce failure risks.

Are Investments in Ageing Bridge Infrastructure Increasing in China and Other Countries?

In the last decade, an increasing shift from investments in the construction of new infrastructure to the maintenance and lifetime extension of existing ones has taken place. In the last 20 years, many countries have implemented bridge monitoring systems. For example, the Confederation Bridge in Canada, the Tsing Ma Bridge in Hong Kong, and the Commodore Barry Bridge in the United States.

How are Advancements in Wireless Technology Driving Demand for Bridge Monitoring Systems?

Wireless solutions minimize installation costs and sensor installation time. These solutions also increase safety levels as they can be configured remotely or prior to installation, and accessed or replaced easily for calibration and maintenance. Advancements in wireless technology are anticipated to be a major factor driving demand for structural health monitoring, owing to ease of connectivity, communication, and control of these systems.

Will There Be Integration with Mass Notification Systems?

Bridge monitoring systems are primarily restricted to monitoring structures and reporting to the required trained personnel. However, in the event of the failure of a structure, alerting is only limited to the personnel in charge of maintaining the structure. Integrating Mass Notification Systems (MNS) with bridge monitoring systems provide a means to incorporate public alerting system measures in case of emergencies and reduce the number of casualties.

The bridge monitoring system market is estimated to be fragmented over the forecast period. This projected high fragmentation is attributed to revenue generated by established small- and medium-sized solution providers and new start-ups. Market leaders are companies that individually hold a market share of above 10%. This group includes giants such as Campbell Scientific, Inc. and HBK.

Companies with a market share of above 5% and below 10% are promising players. These companies are likely to showcase quick growth and harness the opportunities that the global market has to offer to accommodate business expansion and revenue generation. This group consists of companies such as MicroStrain, Inc., GEOKON, SENSR, Smartec SA, and SIXENSE Systems.

Companies that have a relatively lower size with a market share worth less than 5% are strategizing to attract new clientele in foreign markets. Emerging players are SignaGuard, LLC, Monnit, Dewesoft, Pure Technologies, and Vallen Systeme GmbH, among others.

Encardio is making use of modern technologies, instruments, sensors, and real-time assessment of bridges for determining their safety and reliability. The company is aiming to provide instrumentation and monitoring for bridges construction.

Some of the leading companies providing bridge monitoring system are:

The adoption of IoT solutions for transportation offers accurate data and real-time visibility, enabling systems to increase their productivity. This convenience factor is anticipated to fuel the growth of the global RFID electronic toll collection system market during the forecast period..

The heavy electric vehicle and industrial equipment charging market is expected to grow at a CAGR of approximately 13.6% during the forecast period of 2018 to 2028..

A comprehensive view of healthcare IoT market has led our analysts to conclude - the market is escalating at a significant rate with it's outlook, current trends, CAGR, growth demand & forecast.