Western blotting or protein immunoblot is an analytical technique used to separate and detect specific proteins from a complex protein sample. Proteins are separated by gel electrophoresis based on molecular weight of proteins, which form bands on a gel and are then transferred onto a nitrocellulose or polyvinylidene fluoride membrane. The steps in western blotting are tissue preparation, gel electrophoresis, transfer of proteins onto membrane, blocking to prevent membrane and antibody interactions, incubation of membrane, and antibody-based detection of proteins.

Western blotting or immunoblotting technique has various advantages as compared with other immunosorbent assays (ISAs), for example ELISA. Western blotting technique is advanced than ELISA as it allows separation of the protein mix by charge, size and/or conformation. This method of stripping used in western blotting can be used for the detection of a number of targets, while in ELISA only one protein can be detected. Due to the fact that gel electophoreis of proteins helps the separation of proteins into bands, the size of the target protein can be determined using this technique. In addition, the protein of interest can be semi-quantified by running an internal quantity standard simultaneously with the samples in the gel. However, one of the main drawbacks of western blotting technique is that it is time-consuming as compared to ELISA and requires highly experienced lab technicians to perform this technique. Also, another drawback of western blotting is that it requires high optimization of experimental conditions like gel concentration, protein isolation, etc. 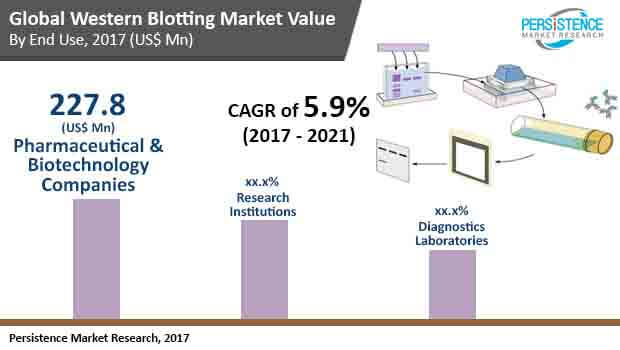 Automation in western blotting bodes well for the market

Western blotting demands time and technical skill to detect specific protein in a complex mixture. Conventional western blots have inconsistent efficiency. Currently, increased throughput screening in western blotting is possible with automation, which enables numerous trials and accelerates experimentation. Automation of western blot enables analysis of multiple samples at once. Loading the sample is the only manual task with automated western blot systems.

This Persistence Market Research report examines the global western blotting market for the period 2017–2025. Western blotting technique or protein immunoblot is used for detection and quantification of specific protein molecules in the given complex protein sample. A protein molecule is separated on the basis of molecular weight and size, forming bands on the gel, which is further transferred onto the transfer membrane for visualization and analysis of western blot. Western blotting market contributes the major share to the molecular diagnostics market in terms of revenue. Molecular diagnostics include various analytical techniques used in the field of proteomics and genomics. Western blotting technique is considered as the gold standard for the diagnosis of HIV. Western blotting, due to its high specificity and reproducibility, is used as a confirmatory test for the diagnosis of HIV.

A lucid report structure aiding in the understanding of this market

Competition landscape dwells deep into the competition prevalent in this market

Another part of the report features the competition landscape of the global western blotting market and has information on the key players operating in this market. The competition landscape contains detailed information on the important companies operating in the global western blotting market in the form of company description, product overview, key developments, strategic overview and key financials of each of the featured companies along with the SWOT analysis of the companies. This competition landscape is a valuable part of the report as it contains all the necessary information to study the leading companies operating in the global western blotting market in detail and also reveals how they implement their strategies and vision to stay at top in this highly competitive market.

A robust research methodology for achieving accuracy in numbers

Overall market size has been analysed through historical data, primary responses, and public domain data. Revenue of companies in the global western blotting market has been benchmarked to ascertain the market size for the base year. Macroeconomic indicators such as GDP and industry growth have been considered to forecast the market size over the forecast period. The historical growth trend of end-use industries, market participants’ performance, as well as the present macro-economic outlook has been taken into consideration for estimating the overall market trend forecast. This data is then validated using the triangulation method and is extensively scrutinised using advanced tools to garner quantitative and qualitative insights into the global western blotting market.

These players have been profiled on the basis of various attributes such as company overview, recent developments, growth strategies, sustainability, and financial overview.